The September 2013 S&P Case Shiller home price index shows a seasonally adjusted 13.3% price increase from a year ago for both the 20 metropolitan housing markets and the top 10 housing marketso.  America is now only 20% away from the peak of the housing price bubble and the two indexes are comparable to May 2004 levels  Graphed below is the yearly percent change in the composite-10 and composite-20 not seasonally adjusted Case-Shiller Indices.

This is the largest annual increase in home prices in seven years as it was last month.  Home prices only increased greater in February 2006, right before the start of the great housing bubble collapse.  Below is a graph of the annual change in the S&P Case-shiller home price composite-20 and composite-10 indexes.  Notice how in March 2006, annual increases are at a cusp and early 2006 is the start of a long slide down.  We have housing bubble déjà vu, so much so S&P mentioned it in this month's press release:

The strong price gains in the West are sparking questions and concerns about the possibility of another bubble. 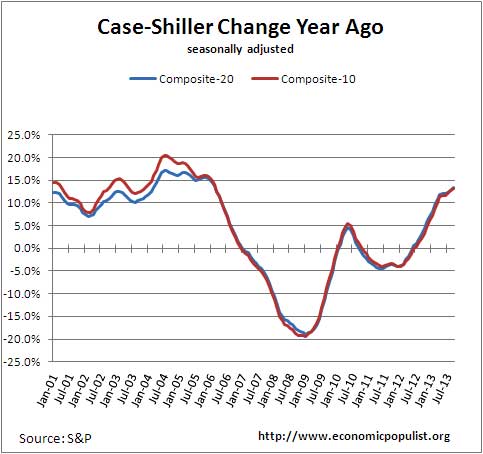 Below is the quarterly national index percent change from a year ago, now at 11.2%.   The national index also shows soaring prices and a return to not affordable housing.

Below are all of the composite-20 index cities yearly price percentage change, using the seasonally adjusted data.  Las Vegas is a bubbling cauldron of trouble as prices have increased over 29.2% from a year ago.  Nevada has the worst unemployment rate in the nation, so it is unfathomable these are real people buying these homes and not investors and flippers.   Generally speaking the West is on fire with increasing prices and we know wages and income for most Americans cannot afford these home prices in spite of very low mortgage rates. 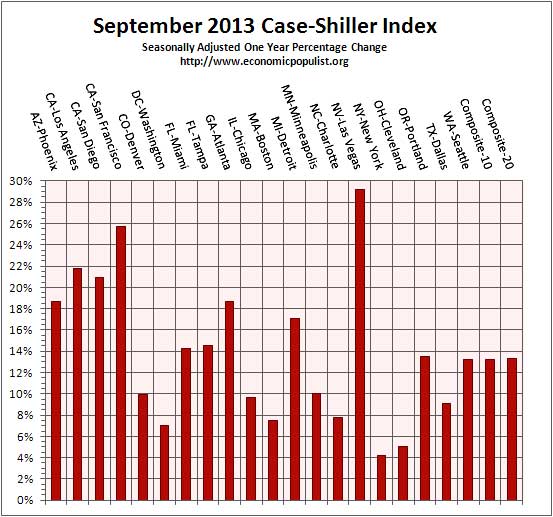 Prices are normalized to the year 2000.  The index value of 150 means single family housing prices have appreciated, or increased 50% since 2000 in that particular region.  Case-Shiller indices are not adjusted for inflation, but they created a graph showing what prices would be if they were adjusted for inflation.  Their graph pretty much follows the above since inflation has been so tame for so long. 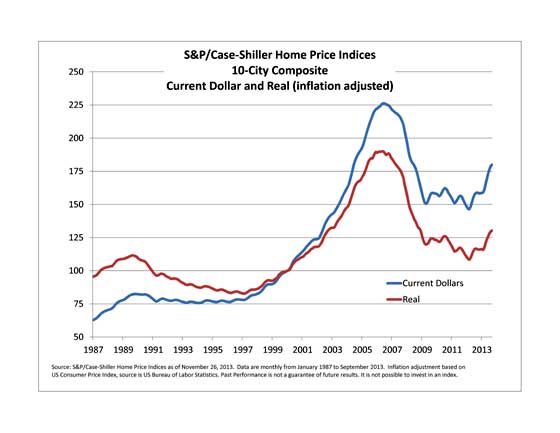 Some in the press use the seasonally adjusted data, and others do not.  Some report the monthly change, others the annual change.  To make matters worse, some in the press do not specify which statistic they are quoting from S&P.  Below are the seasonally adjusted indices for this month.  The index itself tells you what has happened to home prices, per city, from the year 2000.  Only Detroit is below their 2000 home price values.  Los Angeles home prices have doubled since 2000 while they have one of the highest unemployment rates in the nation, 9.7%.  Clearly most cannot afford a home in LA, so one must wonder how these increases are sustainable. 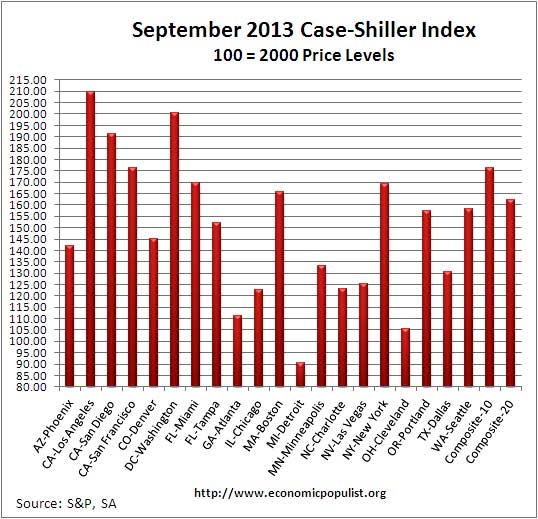 S&P mentions other statistics should imply slowing growth, yet do not address the increasing prices in their press release beyond mentioning the keyword bubble.

Other data suggest a market beginning to shift to slower growth rather than one about to accelerate. Existing home sales weakened in the most recent report, home construction remains far below the boom levels of six or seven years ago and interest rates are expected to be higher a year from now

We see the problem being wages and employment and thus we believe there is a new bubble forming.  Only when incomes come into alignment with home prices will we feel the residential real estate market is healthy and sustainable.

To see S&P's argument in action, look at the below graph.   The maroon line is the seasonally adjusted national index, reported quarterly.  The blue line is the not seasonally adjusted national index.  As we can see before the housing bubble burst, we see a typical cyclical pattern difference between the seasonally adjusted and not seasonally adjusted data points.   Yet after the bubble burst we see large swings, which would throw off a seasonal adjustment adaptive algorithm.  This is going to become a major question among statisticians, how does one adjust for seasonality in the face of tsunami like economic events?  Is it now long past the housing bubble collapse, yet we can see the seasonal adjustments still are not completely matching up from the year ago percent changes, which implies they are still off statistically.

Yet the people who managed to hang onto their homes and recover simply make the spread of income inequality that much worse and those buying a 1st home or trying to recover from foreclosure don't have a prayer's chance with increasing prices. In other words, most of the press do not tell the whole story on soaring home prices.

isnt it curious that the report continues to refer to changes in house prices as "returns", as if a house were not a home, but rather an investment vehicle which could be flipped as soon as a profit could be realized...ie, they report that "twelve cities posted double-digit annual returns..with Las Vegas gaining 29.1% year-over-year followed by San Francisco at 25.7%, Los Angeles at 21.8% and San Diego at 20.9% and that "San Francisco and Los Angeles showed their highest annual returns since March 2001 and December 2005".