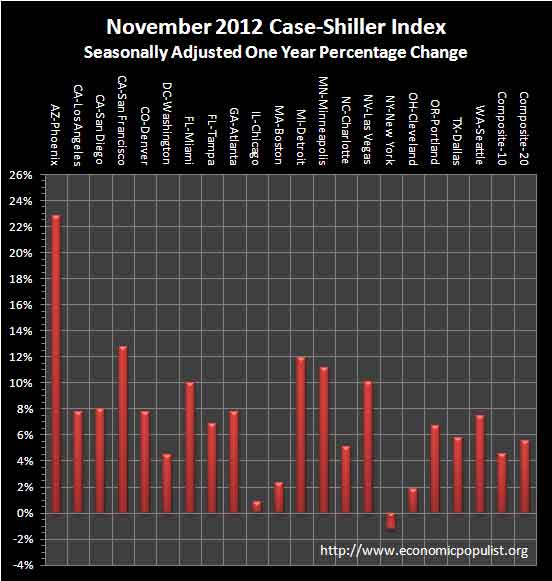 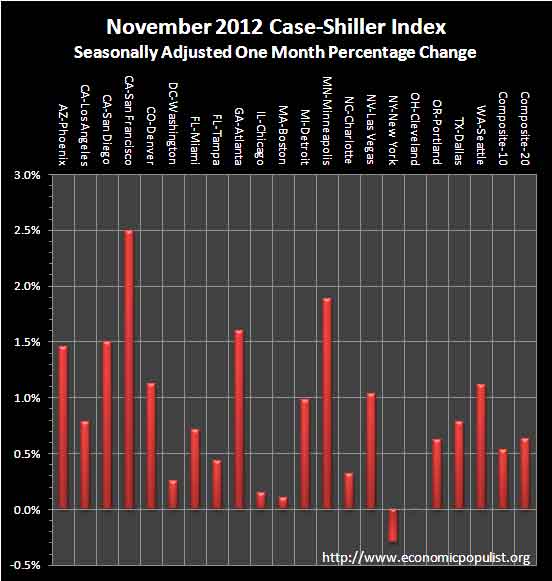 Below are the seasonally adjusted indices for this month. Folks spin these indexes with percentages while the index itself tells you what has happened to home prices, per city, from the year 2000. Profit makers are all about the annual change whereas homeowners who bought over a decade ago are worried about the levels and how underwater they still are with their mortgages. 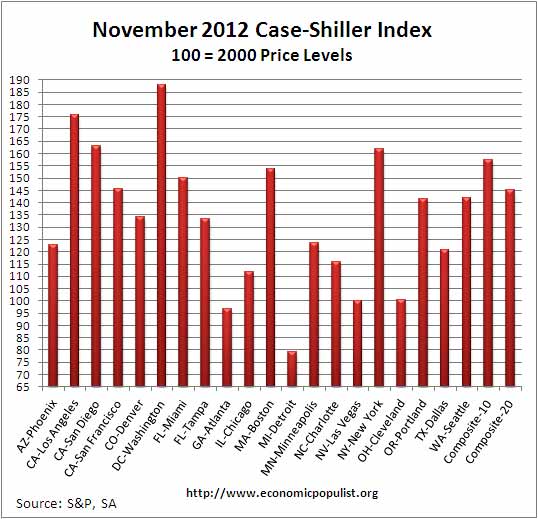 S&P estimates home prices are down approximately 30% from the height of the housing bubble's June and July 2006 price peaks. These statistics use the not seasonally adjusted home price indices.

Either way you look at this month's data, most metropolitan area housing prices are increasing and in strong recovery. From the S&P press release, using the not seasonally adjusted home price indices, S&P is saying the housing prices for the composite indexes have increased 8%-9% since early 2012. While this is great news showing the housing collapse is over, in terms of affordability for working families, it's really not. One simply cannot afford even a $200,000 mortgage when a household earns $42,000 a year, never mind a $300,000 one.

Winter is usually a weak period for housing which explains why we now see about half the cities with falling month-to-month prices compared to 20 out of 20 seeing rising prices last summer. The better annual price changes also point to seasonal weakness rather than a reversal in the housing market. Further evidence that the weakness is seasonal is seen in the seasonally adjusted figures: only New York saw prices fall on a seasonally adjusted basis while Cleveland was flat.

The news is truly hyping these figures and the current "buying" frenzy has much more to do with massive shortage of supply due to so much inventory being kept off of the market and also record low interest rates.

Isn't this the plan? Someone's making money off the bubbles and those people are banksters and politicians. They are keeping the Ponzi going as long as possible, taking their %s while it lasts, and then will sit there with fake sad faces when it blows up again and ask with crocodile tears, "Who could have known?" as they fly off to their coke-fueled parties in one of their secure retreats.
Education bubble - what happens when people have every degree imaginable, pay the academic banksters (i.e., loan companies, the politicians that own their stocks, and university administrations) $50,000 - $500,000 for no jobs (overqualified for Starbucks, sorry, they tell them so too) and the bastards in control still want more visa recipients to take any job that might open up? No jobs, massive debts, and wiping one's ass with a BS in Chem. E.? Loan bubbles, baby. While jackasses on TV that dropped out because they couldn't hack school call the engineers and everyone else with all these degrees dolts and lazy. Yup, that's how the USA rolls in 2013.
Stock market - Bernankster wanted the bubble, just like Greenspan did, "feeling good"/wealth effect bubble. ZIRP, Fed loans to private dealers = trillions being pumped into everything under the Sun. Geniuses at work, really, they are.
Housing? Sure, artificially keep houses off the market and/or not speed up foreclosures or short sales to jack up prices.
Plenty more bubbles out there, obvious to anyone that looks. Me, I know for sure Facebook's stock is definitely here to stay and will hit the moon soon. Apple too will come back and hit $1000 or even $2000 because they told me so and people on TV and in power are smart, honest, and paid to tell me the truth and not sell me snake oil.

Right, they are trying to return to 2006/2007 with the same bad policies and same mentality. It is astounding considering what happened.

Why would they change anything? They screwed up the globe, we bailed them out against our will. We saw nothing come out of it (e.g., no return to Glass-Steagall, no punishment of banksters or corporate bigwigs, or anyone else, and certainly no prison + forfeitures, Greenspan still viewed by the criminal cabal as the Wise One, Dimon and others still risking the globe with trillions in derivatives they don't understand, NAFTA still in full force, etc.) and actually things got/are getting worse for us regarding unemployment while they made record profits.

So they know they never suffer or lose any $ or power - why not go full bore once again, they won't lose anything.
1) Are they still partying in Davos? Check.
2) Still getting their asses kissed on MSM and actual control of MSM? Check.
3) Unearned massive salaries for lying and theft and criminal cartel conduct? Check.
4) Bonuses? Check.
5) Running Treasury, Bank of England, ECB, controlling the White House, EU, World Bank, etc. through donations and favors and appointments at top levels (including legions of Goldman Sachs alum)? Check.
6) The small criminal elite still talked about like they are the only people worthy of "public service"? Check.
7) The media still lying through its teeth? Check. Why just today, USA Today and other newspapers were claiming the contraction in GDP was a sign that the economy was still on its slow, perpetual recovery, no need to worry. Yes, that's right, normally that means we are in a recession or headed for one, but in 2013, it means "recovery right on course" along with unemployment levels near Great Depression I levels with no improvement.