Shockers of all shockers, China let the yuan rise against the dollar.

China's central bank, after setting the mid-point for Monday's trading range, let the yuan rise 0.42 percent to 6.7976 per dollar—both the biggest daily gain and the highest close since China revalued the currency and introduced a managed float regime in 2005.

At one point, the yuan was up as much as 0.47 percent from the day's mid-point—just shy of the currency's 0.5 percent limit, which had rarely been tested in practice in the past.

Traders said the lack of intervention by the central bank suggested it wanted the market to drive intraday trade and so underline its weekend pledge.

But it also showed it had ultimate control by setting the reference rate, around which the yuan can trade, at the same level as Friday's fixing.

While today we actually saw a rise in the yuan, don't be so convinced this was a real policy change. China may simply be trying to get international pressure off their banks in order to not be labeled a currency manipulator. China has a long way to go to let the currency re-evaluate to it's true value. Current estimates say the Renminbi is undervalued by 23% to 40%.

U.S. Treasuries fell along with the Yuan rise. The reason is most believe China will buy less of them causing demand to slow.

Meanwhile we have this, an opinion on the need to focus on U.S. policy. This is basically right, the U.S. gave away the farm to China in the first place.

While China’s role in global imbalances is indisputable, officials in Beijing didn’t put the U.S. where it is.

It was the administration of Bill Clinton that decided to remove Depression-era banking-system safeguards and fight efforts to regulate derivatives. It was President George W. Bush who removed every financial regulation in view, squandered a budget surplus through tax cuts for the ultra-rich and put a pointless war in Iraq on a credit card.

China didn’t tell Americans to buy homes they couldn’t afford. It didn’t encourage bankers to take on enough leverage to topple Wall Street’s mightiest names. It didn’t ask the U.S to flood global markets with Treasuries because it wanted to own a mountain of them. China didn’t lobby against reforms that might protect the U.S. from another financial crisis. That will be on President Barack Obama.

In response to the media buzz headlines on the great exchange rate change, EconomPic Data has created the most illustrative graph: 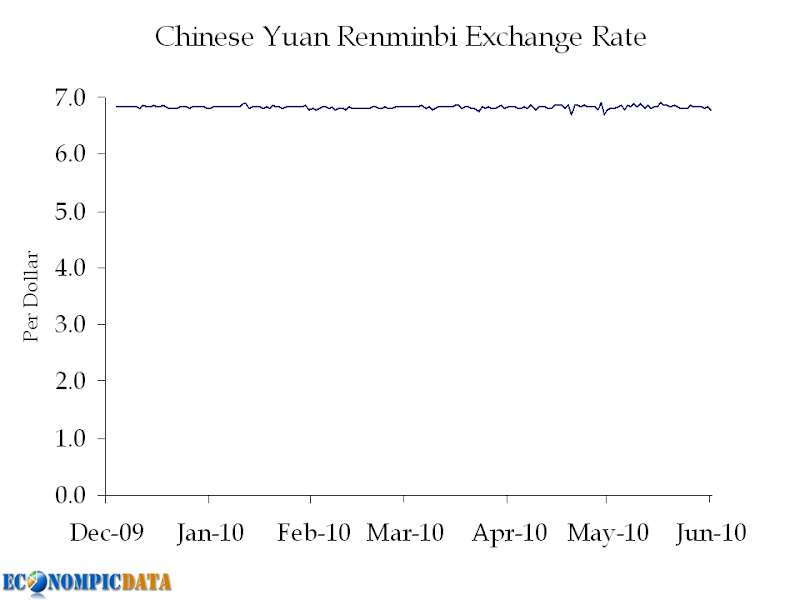