Everybody has heard the reason manufacturing goes to China and services jobs are offshore outsourced to India is cheap labor. Well, there appears to be more than a grain of truth to this claim. The BLS maintains an international labor comparison statistics site. Manufacturing labor costs in China and India are 4% of the United States for 2009. 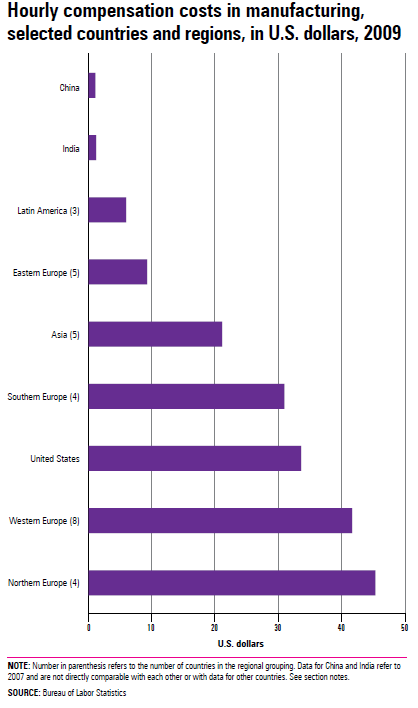 At the same time though, European labor costs are much more than the United States and one of the reasons Germany's economy is so strong, is their exports and manufacturing sector. Germany clearly has bucked the trend, yet the below percent change for 2009-2010 in manufacturing unit labor costs graph, shows other nations are lowering wages. The great labor arbitrage race to the bottom looks full on. 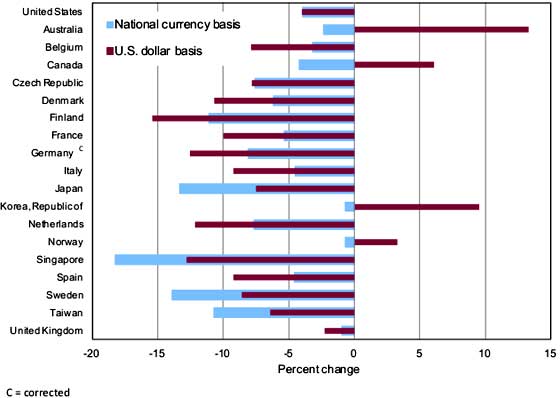 For 2010, the BLS could not compare directly labor costs for India and China, mainly due to a lack of data and details. Below is the chart for manufacturing labor costs for 2010 they could compare. 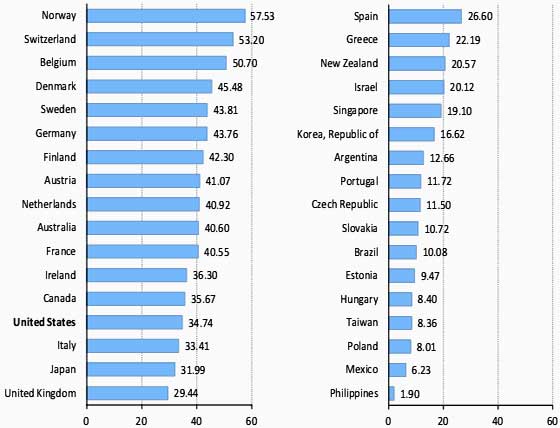 In the same report, they show the compensation comparisons for China and India up to 2008. Realize, if these labor costs even triple, they still would be below Mexico.

From 2007-2009, the United States was only behind Estonia, Spain and Ireland in employment contraction. This is while Asia employment grew. 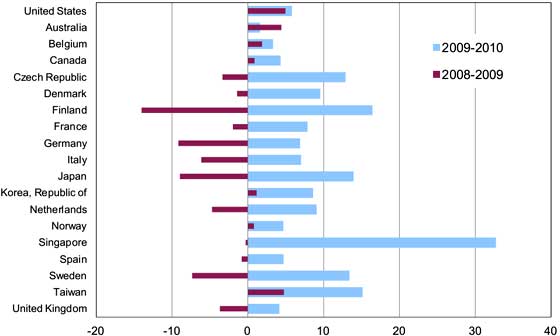 Higher productivity is not translating into increased wages for U.S. workers. It means more output per hour worked. In fact, only Estonia had a larger drop in hours worked for manufacturing than the U.S. from 2007-2009. 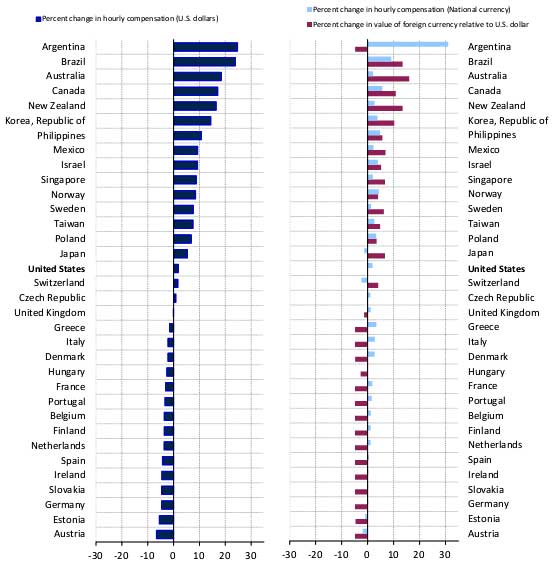 As we can see from the above, exchange rates are effecting U.S. manufacturing competitiveness significantly. This is why confronting China's currency manipulation is a job creator. The situation is so bad, we cannot even get accurate statistics to compare China's labor costs to America's. Regardless, considering China is the second largest economy, we know they are undercutting global labor, in particular U.S. labor, to the point of absurdity. There is no way any nation can compete against such manipulations.

All of the above graphs were provided by the BLS. There is more much data, including global GDP, GDP per capita (per person), available on their website, located here.

Labor costs as a percentage of the total production costs vary widely per industry and product. The percentages of labor costs to total manufacturing costs can be as low as 10% or upward past 50%. Most assume an average of 30%. Regardless, when a labor pool is next to nothing in comparison to U.S. workers, it makes an impact in a corporate bottom line.

Why is it Germany dominates in exports, manufacturing while the U.S. offshore outsources pretty much anything not nailed down (and that too)? Both have issues with China and India. It's Germany's other policies, their strong labor protections and their manufacturing policies where are making up the difference. We'll leave this to another article but anyone claiming America's labor costs are the highest in the world or we need to lower them is simply dead wrong.

Right but if those are subsidized by the state vs. private enterprise then it still comes down to wages. You bring up some detail though to help explain why the BLS waited and is waiting to do a direct comparison of wages in both China and India and we have just up to 2008. Regardless, it's clear they are mega cheap labor.

The BLS has a pretty detailed paper on where they are getting their data and what assumptions they made to estimate labor costs in China through 2008. They are attempting to estimate the benefits and note finding hours worked is tough.

As one who has sifted through China data to find information on trade, the fact they haven't been able to publish a reliable estimate up to 2010 is no surprise. China isn't exactly forthcoming on a host of data points.

Anyway, gives some detail if people believe China and India are not our 1-stop cheap labor depots.

Obviously, you didn't know China and the living condition of the ordinary people their. There is no housing and food subsidy there, and the medical cost is high (especially for the one who haven't join the social security).While, if you are the lucky one who could find a job in state-owned enterprise,you can receive some extra benifit (including the housing the medical subsidy).Still, the chance is limitied. But for a developing country with such a population scale, it's really a tough job to improve the living standard of all the people in the near future.

i have been to China twice and study its language and people. China no longer provides free medical to its workers. It no longer provides pensions to most of its workers. There are still some subsidies, like housing, for workers in state enterprises but even these are disappearing. China has endorsed the worst of capitalism in destroying its safety net.

i worked for a company in Connecticut (winchester electronics in case anyone wants to verify how many times the workers they laid off have been given free trade adjustment benefits) that has outsourced virtually everything except the CEO to china...

to make long story very short they would fly chinese engineers to the states to learn the product. This chines engineer says to me in his "broken english" that the chinese want to be just like America. I remember my first thought at the time was "why"?

reading your comments it sounds like they are well on their way to being just like America.

I believe it's all been predicted by Orwell's fable, Animal Farm.

This is a review and recommendation of a radio show and podcast in the series This American Life (produced by WBEZ and Chicago Public Media, with host Ira Glass). The show this weekend features Mike Daisey, an Apple superfan turned people's reporter and independent investigative journalist. Here's from the webpage as archived at thisamericanlife.org --

Mike Daisey performs an excerpt that was adapted for radio from his one-man show "The Agony and the Ecstasy of Steve Jobs." A lifelong Apple superfan, Daisey sees some photos online from the inside of a factory that makes iPhones, starts to wonder about the people working there, and flies to China to meet them.

And embedded here is the link to the podcast webpage of This American Life, which will include the Mr. Daisy show as of this coming Monday.

Rest assured, it's all very well connected up, although the connections are never made by, probably, 99.9% of American consumers of electronics. I respectfully suggest that if you are an American consumer of electronics at all, the story really does connect to YOU, and once you get it, you'll never forget it. The story isn't limited to China -- it's about unnecessarily horrendous working conditions created in many  countries by the world system of corporate globalism and finance capitalism. Shenxhen in China may well be the location of the biggest and most efficient sweatshop operations in the world, but China is, IMHO, probably not the worst of the offenders.

Following Mike Daisey's presentation, Ira Glass interviews a couple of people qualified to speak about the questions. Ira Glass also notes that the companies involved, including Apple, were invited to respond on the show, but declined.

Everyone really should take a listen to the podcast, IMHO (all of it). It may just be audio, but it's an eye-opener! (Second part of the podcast deals fairly well with whatever methodological objections you might have left over from the first part.)

"We fought for labor rights and protections for a hundred years in the USA and then we exported the jobs ... and we didn't send the protections with them." -- Mike Daisey (on This American Life, 7/8 January 2012).

Believe this or not, it was raved and praised and the new CEO is the one who architected the entire global supply chain and moved manufacturing to China. Foxconn employs 1 million people. That's a hell of a lot of jobs. I don't know the labor costs (slave labor costs) are that great, but electronics, tech has dropped in price dramatically.

Of course if manufacturing was in the U.S., people would make enough to afford $1k priced iPhones. Now people cannot afford $600 and how they are playing these fleecing cell phone plans is beyond me. $30 bucks for 2GB data is just as bad to me as payday loans.

None of the assembly-line workers interviewed by Daisey had ever seen an actual iPhone user, let alone actually owned an iPhone. Probably, none of them could ever afford a cell phone or cell phone service of any kind.

we have cloned iPhones in China, in masse and yes they do indeed have cell service, phones there, much more than landlines. There have been counterfeit Apple stores popping up all over China.

Maybe I got a wrong impression, not what Daisey intended to convey.

It's just that Daisey definitely indicated that when he managed to talk to assembly-line workers outside the Foxconn facility, he described them as never having seen an iPhone in use by an actual iPhone user.

Daisey did indicate that he had been able to contact people, and I suppose that must have usually been by cell phone, now that I think about it (extrapolating from your remarks).

Anyway, I think it's much more sustainable for an economy when manufacturing workers can earn enough to purchase manufactured products.