When budget slashing pops up in the political rhetoric, rarely is war mentioned. A new study reports the wars since 2001 have cost the United States $3.2-$4 trillion dollars...and counting. Worse, it's all been done on borrowed money. The interest on the money borrowed is $400 billion through 2011.

How did the study authors arrive at this astounding sum? By adjusting for inflation and including indirect costs, such as the lifetime health care of wounded soldiers. For example just Pentagon funding is $202 billion in interest due to the U.S. borrowing costs. Add in other costs, the interest on the debt hits $400 billion. Below is their graph of total costs without health care for veterans. 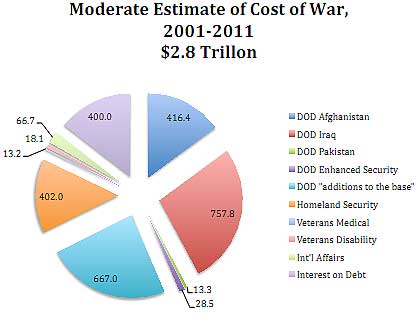 While some of the report is questionable, for example, claiming private sector jobs would create more jobs than defense related ones is probably true, yet at the same time, the types of jobs listed are not middle class income level career positions.

That said, the report amplifies the wars in Iraq, Afghanistan and Pakistan have been a huge drain on the U.S. economy. While we rebuild Iraq, our infrastructure is crumbling.

The value and rate of investment in military assets has increased significantly since 2001, while investment in other public assets -- roads, bridges, dams, public hospital buildings, water systems, waste treatment facilities, and sewage systems -- has declined in comparison.

If the investments in military assets and infrastructure over the last decade had been made in core public economic infrastructure (transportation, roads, utilities, water systems, and sewerage) instead, this would represent a 7.4 percent boost to the current value of key public assets providing an additional $150 billion in benefits to the private sector in terms of increased productivity.

Earlier we amplified the U.S. spends over $500 billion per year on contractors, many of them military contractors.

With all of this rhetoric to slash what is left of social safety nets for Americans, isn't it interesting how war never pops up as a real cause of America's budget deficit woes?

Great website by the report authors. We might see the death of pdf yet for Academic research presentation.

I am not sure what Robert Oak had in mind, but to me the distinction is that wars since George W. Bush have been "off-budget" -- thus essentially and to the core "done on borrowed money". It's debt that we don't even count somehow, according to the rules of our militarized political institutions.

To me, the point needs to made that tax cuts for upper incomes and corporations are absolutely incompatible with being a nation at war, because that's what we are -- a nation at war. But did the Democrats when they had the Congress enact Rep. Abernathy's War Profiteering Prevention Act? No, they did not. And, with the current Republican House, I believe that Rep. Abernathy has been unable even to introduce the bill. Like "off-budget" wars, war profiteering has been declared non-existent.

That's the economic aspect of all of it. That's the bulshi!