In the debt-based currency system of today credit is the life-blood. Without credit the economy has no money and nothing can grow.
That's why all this talk about economic recovery is puzzling. There is no talk about more jobs, higher incomes, or more paid working hours. So any recovery must come from credit. Yet it is credit that is lacking.


Professor Tim Congdon from International Monetary Research said US bank loans have fallen at an annual pace of almost 14pc in the three months to August (from $7,147bn to $6,886bn).

"There has been nothing like this in the USA since the 1930s," he said. "The rapid destruction of money balances is madness."

Similar concerns have been raised by David Rosenberg, chief strategist at Gluskin Sheff, who said that over the four weeks up to August 24, bank credit shrank at an "epic" 9pc annual pace, the M2 money supply shrank at 12.2pc and M1 shrank at 6.5pc.

"For the first time in the post-WW2 [Second World War] era, we have deflation in credit, wages and rents and, from our lens, this is a toxic brew," he said.

The credit crunch, while centered in America, is still global in nature, and the worst is yet to come.

The problem is massive losses from irresponsible lending during the credit bubble has impaired the balance sheets of the banks. They now have to build their capital reserves in order to weather the storm of their own creation.

The Federal Reserve has responded to this crisis by massively expanding their portfolio, taking enormous amounts of debt off the bank's balance sheets and onto their own (i.e. the taxpayer's).
But it is highly questionable just how much effect that is actually having.

During the September 2nd week, U.S. commercial banks cut back on their commercial & industrial (C&I) loans by $10.3 billion; their real estate credit by a huge $15.3 billion; and their lines to consumers by $6.4 billion. In sum, $32 billion of banking sector lending evaporated during the week, bringing the total contraction to over $200 billion since the end of July. Not only is that unprecedented, but it is also a record decline in percent terms — down at over a 12% annual rate on a 13-week basis...these declines in lending activity are triple the most severe downdrafts we have seen in the modern era — there is no comparison.

There is plenty of talk about the crisis being over, but corporate access to credit has never been harder.


"The pace of bank credit tightening has become draconian in scope and now stands at the recessionary levels last seen in 1991 and 2002," credit analyst Christopher Garman said in a report. "This promises a rapid increase in default rates over the next few quarters."

There is starting to be talk about a return to normalcy, but consumer access to credit continues to dwindle.


About 65 percent of domestic banks -- up notably from about 30 percent in the April survey -- indicated that they had tightened their lending standards on credit card loans over the past three months, and about the same fraction of respondents -- up from roughly 45 percent in the April survey -- reported having tightened standards on consumer loans other than credit card loans.

It you look at the banks who have received taxpayer bailouts you will see that they are the biggest offenders when it comes to restricting lending.

Surely the banks aren't burying the money in a tin can in their back yards. If they aren't lending it, what are they doing with it? The Wall Street Examiner has a handy chart that answers that.

While banks have shown no stomach for lending money to companies and consumers, they have no problem at all using the taxpayer bailouts to speculate on the stock market or credit derivatives.


Companies are selling exotic financial products similar to those that felled markets and the world economy last fall. And banks' appetite for risk has grown: The nation's top five banks collectively stood to lose more than $1 billion on an average day in the second quarter of 2009 should their trading bets go sour, a record level...."There's no fundamental change in the way the banks are run or regulated," said Peter J. Solomon, a former Lehman vice chairman who runs an eponymous investment bank in New York. "There's just fewer of them."

Indentured servitude - that is where this leading.

Take a look at this article: Mortgage Problems Are Walloping Americans' Credit Scores. The article does provide some good advice for people who are struggling with their mortgage. What better way to gouge people for more fees and interest if credit scores go higher.

For example, roughly 36.6 million of the 213 million consumers tracked by the three national credit bureaus in the first quarter of 2008 had Vantage scores above 900 -- the super-prime credit rung. That select group represented 17.2% of the country's consumers.But by the end of the second quarter of this year, just 15.4% -- 33.3 million out of 216.9 million individuals' files -- were left among the elite. By credit industry standards, that's huge.

EconomPic Data has another graph on this, showing if the Fed is not counting, lending has dropped like a cliff and is calling the justification for TARP (i.e. liquidity, lending) a massive ruse and this is the "greatest story never told".

I'm pretty sure his blog is all about cranking out graphs from spreadsheet data (original) with analysis.

(S)He's becoming one of my favorite blogs. Title is awful but his "darn nice economic eye candy" is dead on.

Hate to be a nag, but your graphs overflow the blog width, which is on the default about 525 pixels.

I saw this post several places and thought the poster made some sense, especially when one drills down to the securitized loans involved, and those pension funds, and insurance industry investments utilized along with bank loans to make up the private equity funds of funds, etc. 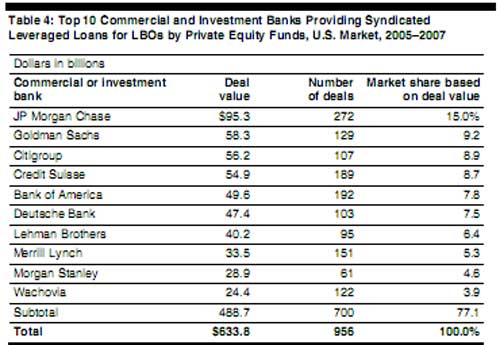 If anyone is wondering, in order to highlight particularly damning information (like the above graph) buried in some 200 page GAO report, I use photoshop and a tool to capture images from PDFs in Foxit reader, which is an alternative to the Adobe plugin for pdfs.

How are those original graphs are being created by other sites? They are downloading excel spreadsheet data, creating a graph from it and uploading the image to their sites. I have some of this "how to" info in the admin forum, in case anyone's interested.

We have the ability to upload images and host them on EP. If you click on the rich text editor and click on the image button, that's how you do it (or host them at an image hosting site and write raw HTML in your posts).

econbrowser has some "projections" implying total lending will rebound.

To make your way in the world today you are going to have to face up to the fact that you need to earn more money. Even if it is enough to pay your phone bill, your groceries and your fuel bills it is surely worth a small investment and a little bit of your time to go out and try something new. Remember, act now before it is too late. The world is changing and we are in a period of adjustment, you must do what you can now it could mean the difference between putting food on the table or not.