NAR's existing home sales bounced up slightly for February with a 1.2% sales increase.  This is surprising sales increased at all, even with seasonality adjustments, considering America's East was stuck in either a snow bank or an ice cube for the month..  This makes sales 4.7% higher than February of last year.  Sales by volume was 4.88 million in February.  Existing home sales have been above their year previous amounts for five months now.  Prices are soaring in unaffordable territory as the median home price has increased for 36 months in a row. 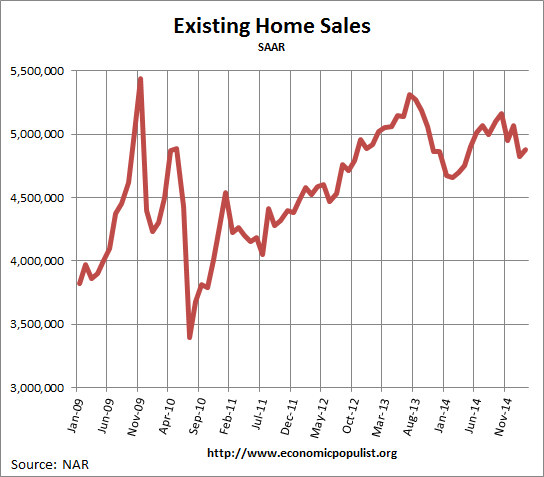 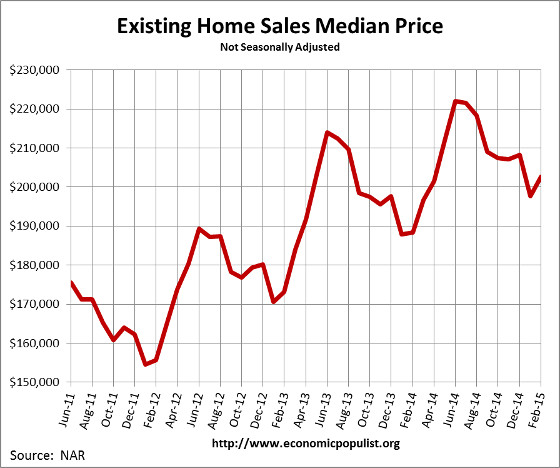 NAR Economist Yun finally observed what we have for some times, wages are much too low to support these types of home prices.  We often wonder how anyone is getting by with rents and homes being so expensive.  People must be sacrificing food in order to make rent and mortgage payments.

With all indications pointing to a rate increase from the Federal Reserve this year – perhaps as early as this summer – affordability concerns could heighten as home prices and rents both continue to exceed wages.

The median time for a home to be on the market was 62 days.  Short sales by themselves took 120 days.  Housing inventory from a year ago has decreased -0.5% but is up 1.6% from the previous month.  Current the 1.89 million homes available for sale are a 4.6 months supply.

On a separate note, RealtyTrac reported February foreclosures decreased by 4% for the month and are down 9% for the year.  RealtyTrac reports 918,565 properties are in the foreclosure process or already bank owned.  It's fairly obvious the great bargain hunt from the housing bubble collapse is over as cheap properties have simply dried up.  Now the issue is the very tight lending standards so new home buyers cannot get into a home, plus the over inflated prices.  The never ending middle class squeeze crush continues.

Below is NAR's breakdown by existing home sales type and regions.  The west has the most unaffordable housing consistently.  NAR does seasonally adjust but the weather overall was the 19th warmest while the Northeast had some of the coldest temperatures and largest snowfalls on record.

In the Midwest, existing-home sales were at an annual level of 1.08 million in February, unchanged from January and 4.9 percent above February 2014. The median price in the Midwest was $152,900, up 8.8 percent from a year ago.

Clayton-owned mobile home dealerships with different names and similar banners offer to “BEAT OR MATCH ANY DEAL.” Customers say they thought they were comparison shopping, when they were really visiting multiple Clayton-owned dealerships — all owned by one company.

The U.S. second richest man, Warren Buffett, owns Berkshire Hathaway, which owns Clayton, the mobile home industry’s biggest manufacturer and lender. Clayton is a many-headed hydra with companies operating under at least 18 names. It also sells property insurance on their mobile homes — and repossesses them when borrowers fail to pay.

Berkshire Hathaway extracts value at every stage of the process. Clayton even builds the homes with materials supplied by other Berkshire subsidiaries. And Clayton borrows from Berkshire to make mobile home loans, paying up to an extra percentage point on top of Berkshire’s own borrowing costs.

Clayton customers described a consistent array of deceptive practices that locked them into ruinous deals: loan terms that changed abruptly after they paid deposits or prepared land for their new homes; surprise fees tacked on to loans; and pressure to take on excessive payments based on false promises that they could later refinance. Former dealers said the company encouraged them to steer buyers to finance with Clayton’s own high-interest lenders. Those loans averaged 7 percentage points higher than the typical home loan in 2013.

Buyers told of Clayton collection agents urging them to cut back on food and medical care or seek handouts in order to make house payments. If they don't, their mobile homes are repossessed.

(* Read more in the links below about Warren Buffett's sleazy company to see why we need more government regulation, not less, as the Republicans always want.)

Conglomerates control so much that is under different brand names to make it seem like choice, when there is little choice. Food is an example where just a few own all of the brand names, ConAgra Foods as an example. Yum Foods for fast food as another.

GDP 5.7% in Q4 2009 - 28716 reads
Taxing Wall Street to Fund Jobs and Recovery on Main Street - 23326 reads
Saturday Reads Around The Internets - The Only Things Certain are Taxes and Death - 6901 reads
GDP Shrunk at 0.9% Rate in 2nd Quarter on Weaker Consumer Goods, Construction, & Inventories - 1695 reads
The outcome of the credit card reform bill - 12992 reads
Paul Ryan Wants to Destroy Social Security & Medicare - 46134 reads
He Did What!?! - 21090 reads
Everything You Ever Wanted to Know about National Health Plans ….and maybe more - France - 26845 reads
Outsourcing Has Its Benefits - Money Landering, Stock Market Crashes and Failed Projects - 40492 reads
Obama and TINA: A scandal we'll never hear about - 63330 reads