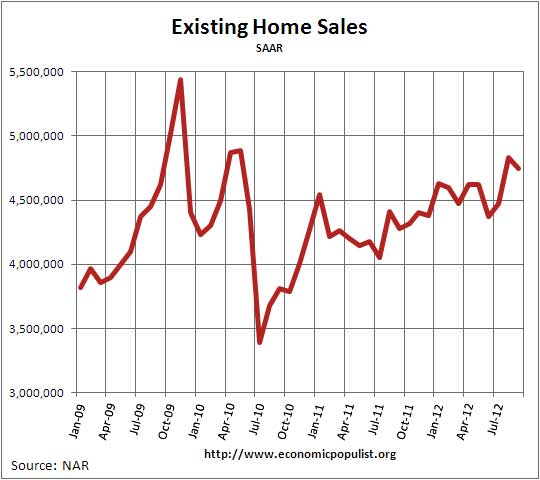 The national median existing home sales price, all types, is up, now at $183,900, a 11.3% increase from a year ago. This is the 7th month in a row for price increases and hasn't happened since at the cusp of the housing bubble, 2005-2006. It's clear foreclosures, REOs are being held off of the market as well as down. Below is the breakdown by types of sales:

According to NAR 30.7% of existing homes were on the market less than a month.

Realtytrac reported foreclosures were at a 5 year low in September.

Foreclosure filings — default notices, scheduled auctions and bank repossessions — were reported on 180,427 U.S. properties in September, a decrease of 7 percent from the previous month and down 16 percent from September 2011. September’s total was the lowest U.S. total since July 2007. 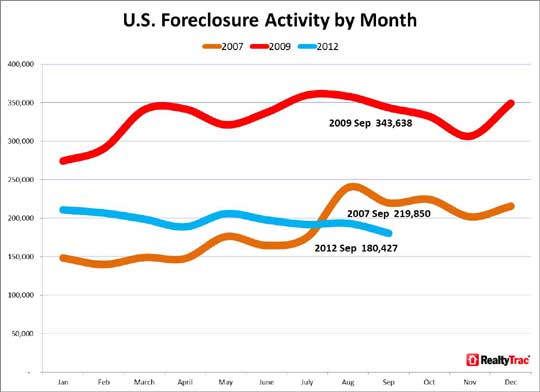 Days to foreclose at record 382 days, legislation extends process in some states U.S. properties foreclosed in the third quarter took an average of 382 days to complete the foreclosure process, up from 378 days in the previous quarter and up from 336 days in the third quarter of 2011. It was the highest average number of days to foreclose going back to the first quarter of 2007.