The Occupy Wall Street protests have taken off, so of course now come attempts to belittle and discredit them. Business Insider posted the below photoshopped image, titled Down with Evil Corporations. Whoever created it believes they are showing the hypocrisy of demonstrators using corporate products to protest corporate power and greed. 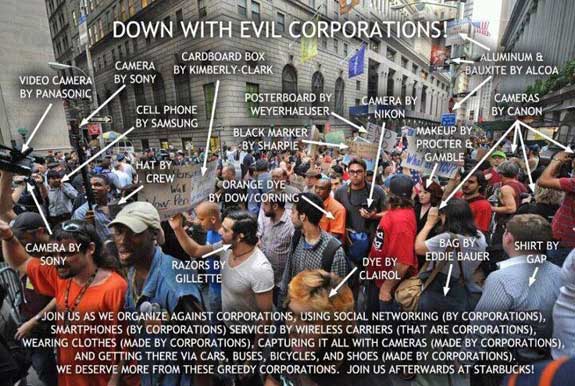 The people all around the world are becoming increasingly dependent on a small number of large multinational businesses. Monsanto controls 90% of the production of genetically modified seeds. Microsoft holds 88.26% market share of the software industry, followed by apple with Mac who hold 9.93%. Everyday 150 million people throughout the world buy a Unilever product without even realising it. Mc Donalds, serve 58.1 million meals a day around the world. Of the 100 largest economies of the world, 51 of them are businesses. The state loses power at the same rate as businesses gain it.

Think about it. Have you ever hunted high and low for lunch meat that doesn't have sodium nitrate or High-fructose corn syrup in it?