"The global financial crisis, which has devastated families in Western Pennsylvania and nationwide, is having an even more dire impact in the developing world. Throughout sub-Saharan Africa and the rest of the global South, children who should be in school are instead hospitalized with diseases that could have been prevented with simple vaccinations. But the money many of these countries should be spending on basic education and health care is instead being funneled to multilateral banks in the form of steep debt payments.

"The affected countries didn't land in this predicament just by their own irresponsibility. If anything, they are paying the price for recklessness on Wall Street. They have often been victimized by bankers who aggressively made loans to brutal and corrupt governments, knowing full well that those loans would not benefit the people. In many cases, soaring interest rates and compound interest make it impossible for these countries to eradicate debt even after scrupulously making their payments time and again."

If simply being the right thing to do isn't enough (and among the bigwigs assembling in Steelerville, I'm not sure it is), what's in it for us and our G-20 partners?

"In today's interconnected world, we cannot wash our hands of global poverty and unjust debt, setting it aside as 'their problem,' which doesn't affect our prosperity or stability. You reap what you sow, the Bible tells us. And under the existing debt regime, the consequences ricochet back to the developed world in the form of expensive bank bailouts, a degraded environment, increased drug trafficking and military conflict."

Good incentives, one would think...

I lifted this from a New York Times article. 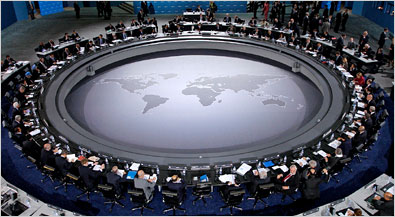 it's like a small group of people all with a map of the globe....what's the message? We run the world? This is our dining room table?