With much fanfare and headline buzz, Obama announced a new program to help homeowners.  What is it?  They simply lifted the 125% refinancing cap for mortgages attached to residential properties.  Previously one could not refinance a home more than 125% of it's current value.   Now you can refinance your mortgage where the principle is twice what the value of your home is.  Nice huh?  Mortgages only held at Fannie Mae and Freddie Mac will qualify and the program is only open until 2013. Your bank must approve and any mortgage sold to Fannie, Freddie after May 31, 2009 also doesn't qualify.

We have a name, HARP, for this program. Yet another mnemonic, similar to hopeless HAMP which was also released with much fanfare. Homeowners found HAMP to be a labyrinth of bureaucratic no help, designed to be a rat maze pretending somewhere there was some cheese.

The Federal Housing Finance Agency, working with the Obama administration, said that up to 1 million “underwater” borrowers might benefit from an expanded program that targets homeowners who owe more than their properties are worth.

But the program might not have a major impact on the economy. There are about 11 million underwater borrowers in the country. And under an illustrative example provided by FHFA, borrowers might reduce their payments by just $26 per month; the Obama administration is touting savings of up to $200 per month. It will depend on the fees charged to borrowers for taking part in the program.

According to Corelogic, 22.5% of mortgages have are larger than the actual value of the property. Those underwater beyond -25% equity is about 11% of all mortgages. 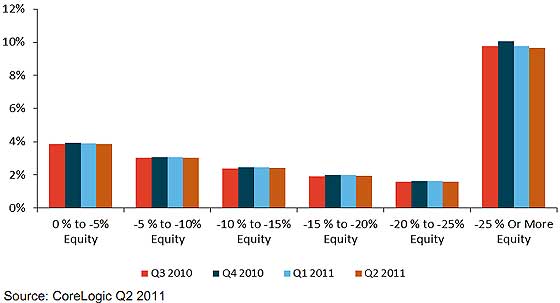 New York Fed President William Dudley gave a speech, which implies a comprehensive housing program, with the idea to prop up home prices:

Stabilizing the housing sector is particularly important because housing equity is an important part of household wealth. This calls for a comprehensive approach to housing policy, starting with an urgent effort to remove the obstacles that make it difficult for all borrowers to refinance at today's low mortgage rates, but extending beyond this to tackle other problems weighing on housing. Taken together, such efforts could help shift people's expectations about future house prices. If prospective homeowners no longer fear that prices could decline further, they will be more willing to enter the market to take advantage of reduced prices and low financing costs, and existing homeowners will feel more confident about spending. A vicious cycle could be replaced by a virtuous circle, in which stabilization in house prices supports spending, growth and jobs.

The median annual wage was $26,364 in 2010. That means over half of America is poor. Homes are still fundamentally not affordable and out of alignment with the new normal, which means the entire U.S. middle class is squeezed, broke, out of a job and now poor. Economist Dean Baker estimates home prices are still a good 10% above trend level. It is assumed that trend level was set when Americans actually had jobs and some money.

Calculated Risk reported a rumor floating around where homes in foreclosure will be sold in bulk, with the condition of letting those foreclosed upon turn into renters and stay in their homes.

Back in August, the FHFA, Treasury and HUD put out a request for input on the disposition of Fannie, Freddie and FHA REOs. The three entities own about 250,000 properties and approximately 800,000 homes backed by Fannie, Freddie and the FHA are in some stage of foreclosure. I've heard a rumor that an RTC like disposition program for Fannie/Freddie/FHA properties is in the works and might be announced in the next couple of weeks (this is a rumor only!). This would probably involve selling REOs in bulk to investors and include some sort of plan to rent them to the current occupants.

Of course there is a catch to the new HARP plan, a reduction in the mortgage term or more fees:

To avoid all fees, borrowers, many of whom have 30-year mortgages, will have to take out a new mortgage of 20 years or less. That will mean that homeowners have fewer years to pay off their total balance, largely offsetting whatever they might be saving by taking advantage of today’s low mortgage rates. The plus side is that borrowers will pay off their mortgages more quickly.

On the other hand, if borrowers pay fees, they will be able to get a 30-year mortgage at the new low rates. That could potentially lead to $200 in savings per month.

One unknown is whether the fees will prevent borrowers from participating. FHFA is to publish final details in mid-November.

Guess what this plan really does? According to The Huffington Post, it helps banks at taxpayers' expense:

The newly expanded program would expunge legal liabilities associated with mortgages refinanced through the program for the original lenders of the mortgages. Each time a bank sent a loan to Fannie and Freddie, it certified that the loan met Fannie and Freddie's safe lending criteria. But many loans sent to the mortgage giants did not, in fact, meet those criteria. Currently, when borrowers default on those ineligible loans, the mortgage giants can "put back" the resulting losses onto the banks that pushed the loans.

Under the modified plan, "put back" liability at banks will be erased for any underwater mortgage that is refinanced through HARP, eliminating Fannie and Freddie's ability to sack lenders with losses in the event that the mortgage does not pan out.

If borrowers go through HARP, but decide after several months that the modest monthly savings do not outweigh owing tens of thousands of dollars more than their home is worth, taxpayer-owned Fannie and Freddie will have to take the full loss. Even if the original loan was sent to Fannie and Freddie with false or fraudulent guarantees from the bank -- promises that may directly be tied to the borrower's current financial problems -- banks will be immune from liability. Fannie and Freddie plan to charge banks "a modest fee" to extinguish this liability, but the administration has yet to determine what that fee will be.

So, finally underwater mortgages can refinance to shave off a 1.89% interest rate differential. But by golly, guess what, your payment plan time period was just reduced by a third. Else, banks are gonna charge you a bunch of yet to be determined fees. On top of it, banks can dump off their toxic mortgage liability onto the government through Fannie and Freddie.

How appropriate to call this program HARP, the instrument of the Sirens. History repeats and like the Greek myth, mortgage holders are lured only to be dashed upon the rocks.

Felix Salmon, over a Reuters, cranks more numbers and shows HARP refinancing will not increase from it's current pathetic rates! Pay attention to people who know how to use a calculator, his article is pretty damning, amplifying this article's conclusion of more smoke and mirrors.

I am studying this, and I'm not sure whether it deserves some credit or not. Some such program as this -- maybe several programs like this! -- could certainly be part of some kind of solution!

Meanwhile, a possible danger here is that there will be pressure on to extend the Fed buyout beyond Fannie and Freddie. In other words, just another bail out, this time to buy up left-over toxic losers from big-time banksters, to do them yet another favor.

I think we really need to watch this Fed aspect of the plan, because USD is so precarious, we can't afford to waste any more options ... options are running out, and we (as a nation) may really need some freedom to move in the next couple of years to keep the dollar somewhat stable and avoid the kind of price-of-oil crunch that could really send us beyond even a Great Depression right down into chaos and demise as a nation.

I don't see who benefits, but the banks, when the Fed buys up more mortgage backed securities.

I think a few people will be helped those who want to stay in their homes regardless but I just at best light, do not believe this is anything but a minor addition. We'll see, HAMP was released with much fanfare and that turned out to be a bureaucratic scam rat maze.

I think Obama is up for re-election and he's out for window dressing. I think all of America has been his true corporate lobbyist designed colors at this point. Not that the GOP field is any better (except Roemer looks better and better to me at least).