Oil hit $94 a barrel, just in time for the Holidays, and is staying there. Now the blame is coming on speculation, inflation, QE2, the falling dollar and good old fashioned supply and demand. Despite even bills in Congress designed to curb commodities derivatives, the CFTC delayed rules introduced to curb oil speculation. Bottom line, it's back, we had a pause, due to the global economic slowdown, but we appear to be witnessing the return of $100 dollar oil.

Paul Krugman is saying the reason for increasing oil prices is emerging economies and limited resources:

What the commodity markets are telling us is that we’re living in a finite world, in which the rapid growth of emerging economies is placing pressure on limited supplies of raw materials, pushing up their prices. And America is, for the most part, just a bystander in this story.

After receiving a lot of criticism, Krugman even put up a crappy graph, showing commodity prices versus the consumer price index over a long period of time. To argue Krugman's point a little more, the crude oil prices drop, earlier today (now erased), was attributed to China's interest rate increase. Speculators tried to imply China's consumption of oil is due to it's overheated and growing economy, thus assuming their interest rate increase will slow China's economy. It's highly doubtful China's oil demand will slow. 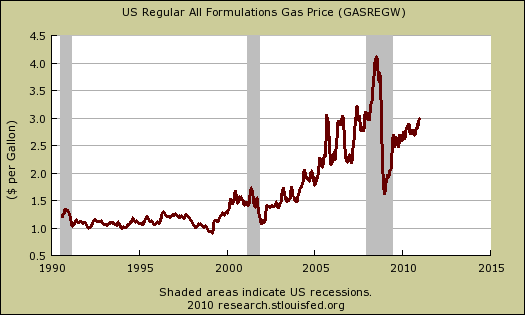 From The Oil Drum, is a graph of oil production vs. price. 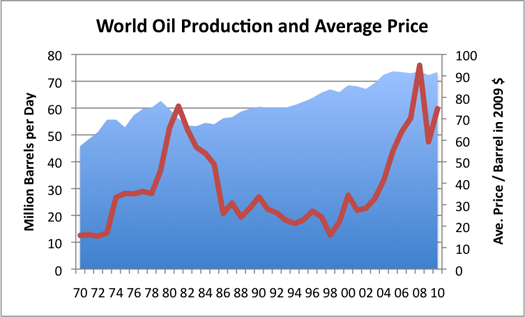 Whatever one wants to attribute rising oil prices to, including QE2, one thing cannot be denied and that is the devastating effects above $4 dollar gas had on the economy in 2007-2008.

Krugman mentioned a paper, by James D. Hamilton (who writes on Econbrowser.com)) and it's worth amplifying the results. Hamilton calculated the effect of oil shocks on U.S. GDP.

Suppose we stick just to the narrowest eﬀect of the energy price shock, namely changes in spending on motor vehicles and parts. How big a contribution would this alone have made to the subsequent economic downturns, ignoring any possible multiplier eﬀects? The ﬁrst column of Table 3 reports the actual average growth rate of real GDP over the 5 quarters following each of the 4 historical oil shocks discussed here. All of these episodes— in which GDP fell on average over a period of 5 quarters— are included in the list of U.S. economic recessions. The second column does a very simple calculation, asking what the average GDP growth would have been if there had been zero change in the motor vehicles and parts component of GDP over these 5 quarters, with all other components of GDP staying the same as reported.

Although this is a modest contribution (less than 0.8% in any episode), it is enough to move the average from negative to positive territory in the case of the 1980 and 1990-91 recessions, oﬀering some basis for thinking that, had it not been for the signiﬁcant downturn in autos in each of these episodes, they might have been regarded
as episodes of sluggish growth rather than clear recessions. By contrast, in the more serious 1973-75 and 1981-82 recessions, there was clearly something more signiﬁcant than just autos bringing down the economy.

Below is Hamilton's table 3, along with a previous estimate by two other Economists:

The U.S. economy is already in a fragile state. The last thing needed is a return to high oil prices. So much has happened since the oil shock of 2007-2008, hopefully this post will be a reminder on how economically crippling $4 dollar gas can be, not just on regular people not being able to afford the gas to make it to the Doctor, but on the overall economy itself.

I find it interesting that all of a sudden the press today realized $5 gas could cripple the economy. Americans have short memories.

Changes in spending on motor vehicles and parts are a horrible way to measure the effects of rising gas prices. The relationship between the two variables is extremely complex. For example, many people buy new cars with lower gas mileage in response to higher prices. This also completely ignores income effects both from higher gas prices and economic recessions in general. I'm sure with all the work that's been done on oil prices and their effects on the economy we can find something much more relevant and sophisticated.

On another note, get used to it. High subsidies throughout the third world are going to drive consumpion up indefninitely, and supply doesn't have much room to grow and will eventually begin to decline and become more expensive to extract. The aparent lack of serious planning for this is either evidence of the tremendous influence of the oil and automobile industries or the complete inability of our political leadership to plan for the long-term.

on estimating GDP, that's the 2nd column, not the GDP one in his table. The paper has more methods, plus you have another economists estimates there as well on overall GDP to compare, not as high as Hamilton, but clearly oil prices dramatically, negatively affect the economy.

I've written a host of posts on China capturing the oil market in the past here. You're right, it's only going to get worse and they need to do something yesterday.