The Federal Reserve's Factory Production report shows a measly 0.1% increase for May 2011 Industrial Production, otherwise known as output for factories and mines. Manufacturing industrial production rose 0.4% yet had dropped -0.5% in April. Japan is still affecting autos and without them, which declined -0.5%, manufacturing would have increased +0.6%. April would have been only a -0.1% drop and they note the terrible tornadoes in the South affecting manufacturing. Industrial production is still down -7% from pre-recession levels, in other words going on 4 years. Here is the Federal Reserve's detailed report. Below is the graph of raw capacity, indexed against 2007 output. This is just how much capacity does the U.S. have to make stuff. Look at how total capacity has declined for the first time in the historical data. This index represents the raw facilities, potential to make stuff. Raw capacity is the underlying number by which utilization is calculated. This month capacity increased +0.2. 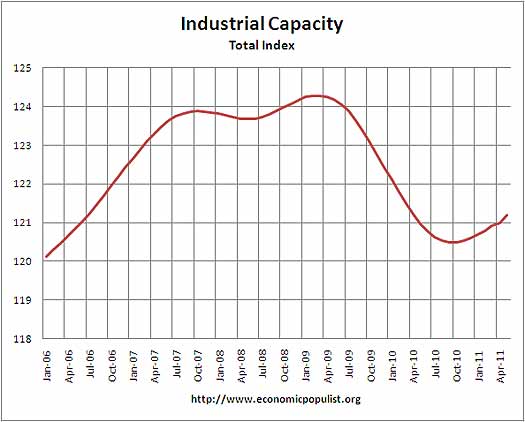 Below is the Fed's description of Market groups from the report and their monthly percent changes. Construction supplies is still 25% below it's peak. We also are seeing the effects of the Japan disaster on global supply chain.

The production of consumer goods edged down 0.1 percent in May after having been unchanged in April. Within consumer goods, the index for durables rose 0.2 percent, while the index for nondurables declined 0.2 percent. Among durable goods categories, the output of automotive products fell 0.5 percent, but the indexes for its other major components increased: The output of home electronics advanced 1.7 percent; the output of appliances, furniture, and carpeting rose 1.8 percent; and the index for miscellaneous consumer durables increased 0.7 percent. The decrease in consumer nondurables reflected a drop in residential sales by utilities; elsewhere, the output of fuels advanced and the production of non-energy nondurable goods edged up. Among non-energy nondurables, the indexes for clothing, chemical products, and paper products all increased by about 0.75%, but the index for foods and tobacco decreased nearly -0.5%.

The output of business equipment rose 1.2 percent in May after 2 months of declines; the index has advanced 9.2 percent over the past 12 months. Sizable gains were recorded both in May and over the past year for all of the major components of business equipment: transit equipment, information processing equipment, and industrial and other equipment. The increase for industrial and other equipment in May was the first substantial gain in this index since January.

The production index for defense and space equipment rose 0.9 percent in May after having been unchanged in each of the previous two months. This index stands 2.5 percent above its year-earlier level. The below graphs show the overall decline of U.S. capacity utilization. Capacity utilization is how much can we make vs. how much are we currently using. These graphs show the U.S. is simply not producing what it is capable of, a reflection of the output gap. Note, this index is normalized to a specific year, currently from most reports, the 2007 yearly average (see year in the graph). Therefore, one cannot take absolute values of capacity utilization, i.e. 80%, and claim this is an indicator of a healthy economy, for it all depends on what year capacity utilization is normalized to. One can take the slope, or rate of change from the peak of a recession and determine recovery, but again, these percentages are relative, they are not absolute ratios to a static point in time. Also recall utilization is a percentage of real total capacity. Notice that total capacity in the United States has declined. This report doesn't indicate a contraction, yet seems to defy other manufacturing reports of recent, so don't be surprised if it is revised downward.