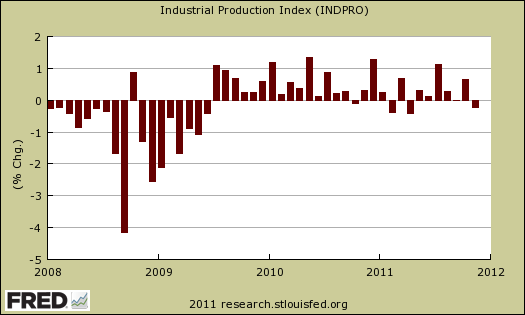 While various economists blame overseas suppliers for the decline in autos, in particular Thailand flowing, bear in mind the South Korean trade agreement is kicking in, where there is consensus more auto manufacturing will be offshore outsourced and a flood of Korean autos will come roaring into the United States. We also had China slap an outrageous tariff on the few autos still manufactured in the United States, SUVs. It might be the auto industry saw that tariff coming, even though most of us did not. Finally, even when a car is assembled in the United States and thus counted as U.S. manufacturing output, parts, engines are globally sourced. Japan has a Tsunami and Earthquake, Thailand floods out, these events can bottle neck the entire global supply chain and can cause a sudden cliff dive in U.S. manufacturing. Many U.S. manufacturers now rely on a global supply chain that is subject to natural and man made disasters. Total Industrial production is still down -5.2% from pre-recession levels, in other words going on 4 years, even while up +3.7% from November 2010. The Fed also reports capacity utilization, is -2.6 percentage points below the entire 1972-2010 average, but is up 2.0 percentage points from a year earlier.

The production of defense and space equipment climbed 1.4 percent in November after a similarly sized gain in October.

The output of construction supplies rose 0.4 percent in November, its third consecutive monthly increase. The index for business supplies fell 1.1 percent, with lower production in both its energy and non-energy components.

Below is the industrial production graph for construction, in black, where we can see this entire sector is still decimated after the housing bubble burst. Construction supplies increased 0.4% this month and are up 3.7% since November 2010. 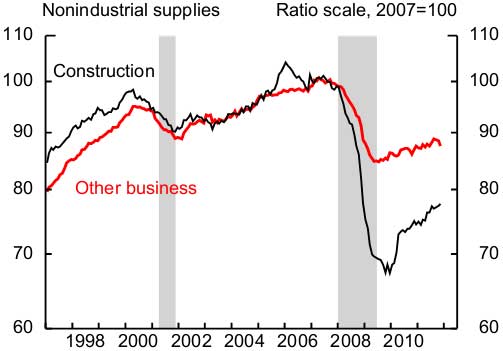 Capacity utilization is how much can we make vs. how much are we currently using. The U.S. is still not producing what it is capable of, a reflection of the output gap. Note, this index is normalized to a specific year, currently from most reports, the 2007 yearly average (see year in the graph). Therefore, one cannot take absolute values of capacity utilization, i.e. 80%, and claim this is an indicator of a healthy economy, for it all depends on what year capacity utilization is normalized to. One can take the slope, or rate of change from the peak of a recession and determine recovery, but again, these percentages are relative, they are not absolute ratios to a static point in time. Utilization is a percentage of real total capacity. One of the more interesting graphs is high technology capacity utilization, shown below. These high tech sectors seems to correlate to when the high tech industry offshore outsourced in droves to China and communications equipment is one area that is being offshore outsourced.. High Technologies capacity utilization keeps dropping and this month was another -1.6 percentage point change. 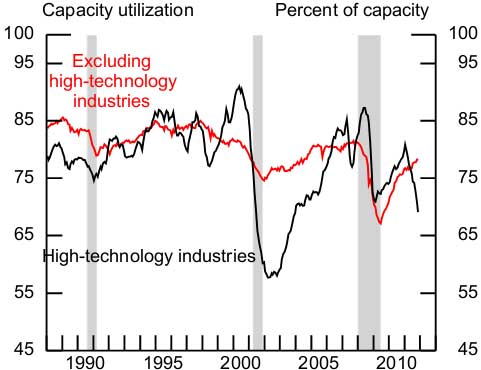 Below is the graph of raw capacity, indexed against 2007 output. This is just how much capacity does the U.S. have to make stuff. Look at how total capacity declined, for the first time in the historical data, during the recession. This index represents the raw facilities, potential to make stuff. Raw capacity is the underlying number by which utilization is calculated. This month capacity increased +0.1 and capacity growth is 1.1% for the year. We are back on the rise, but still below pre-recession levels. 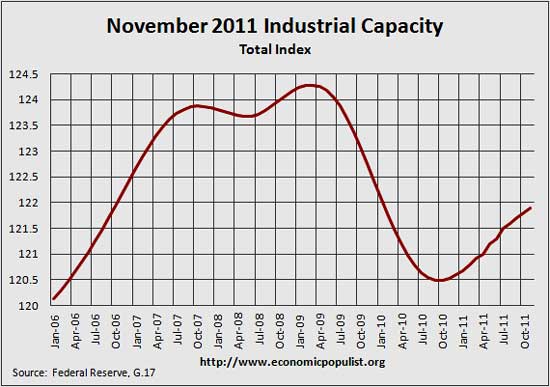