The Federal Reserve Industrial Production & Capacity Utilization report shows a 0.6% increase in industrial production.  Manufacturing alone grew by 0.8% for the month after plunging -0.9% in January due to horrific weather.  This is the largest factory output gain since last August,  Utilities were slightly down by -0.2% after January's polar vortex winter increase of 3.8%.  Mining increased 0.3%.  The G.17 industrial production statistical release is also known as output for factories and mines.  The graph below shows industrial production index. Here are the major industry groups industrial production percentage changes from a year ago.  The below shows manufacturing is really fairly weak, even with this month's strong showing.

Manufacturing output is still 2.8 percentage points below it's the 2007 average..  Below is a graph of just the manufacturing portion of industrial production.

Within manufacturing, durable goods increased 0.9% for the month and has increased by 2.7% from a year ago.  Autos & Parts was on fire, with a 4.8% monthly gain.  Machinery and fabricated metal products both increased by 1.5%. Nondurable goods manufacturing increased by 0.7% for the month, yet in January plunged by -1.1%.  Nondurables have increased just 0.5% from a year ago.. Mining showed a 0.3% monthly increase and for the year has increased 6.1%.  Mining includes oil and gas production, which has grown considerably, as shown in the below graph. Utilities are volatile due to weather and why the below graph shows the wild January and also why utilities remained high in effect for February.  Brrrr.

In February, the production of consumer goods rose 0.8 percent and was 2.6 percent above its level of a year earlier. The indexes for consumer durables and consumer non-energy nondurables moved up 2.1 percent and 0.9 percent, respectively, in February, while the index for consumer energy products decreased 0.8 percent. Within consumer durables, the production of automotive products jumped 4.6 percent to reverse most of a similarly sized decrease in January, and the output of home electronics increased 0.7 percent. These gains in February were partly offset by a decrease of 1.7 percent in the production of appliances, furniture, and carpeting as well as a decline of 0.1 percent in the output of miscellaneous goods. Within consumer non-energy nondurables, the indexes for foods and tobacco, for chemical products, and for paper products each rose about 1 percent, while the output of clothing moved down 0.7 percent.

The production of defense and space equipment increased 0.2 percent in February following a decline of 0.3 percent in January. The index for this market group was 2.6 percent above its level of 12 months earlier.

Among nonindustrial supplies, the output of construction supplies moved up 0.2 percent in February after having fallen in each of the previous two months. The index for construction supplies was 0.1 percent above its level of a year earlier; between February 2012 and February 2013, the index had increased 4.5 percent. The production of business supplies rose 0.7 percent in February, more than reversing its decline in January, and was 3.1 percent higher than its year-earlier level.

Capacity growth is raw capacity and not to be confused what what is being utilized. Instead, this is the actual growth or potential to produce.  Capacity is the overall level of plants, production facilities, and ability to make stuff, that we currently have in the United States.  Capacity growth overall has increased 1.9 percentage points from a year ago, the same as the previous two months  Below is the capacity growth increase from a year ago of the subcategories which make up industrial production.

Now we need to make clear how raw industrial capacity has simply flatlined since 2000.  This is the facilities, the plants, the industrial capabilities of the United States.  Below is a graph of total industrial capacity up to 2013 and this includes manufacturing, logging, mining, utilities and publishing industries.  Traditional manufacturing, as defined by NAICS codes is graphed in red.  What we see is strong growth until about the year 2000, then raw capacity flatlines.  The capacity utilization 85% high was in 1994/1995.  Welcome to hollowed out America. 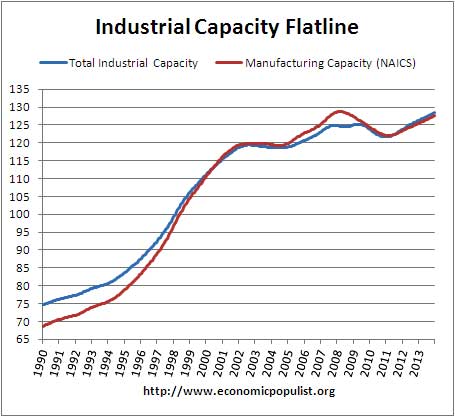 According to the detailed capacity table, in 1994/1995 semiconductors used 92.1% of their capacity.  In February that figure was 66.4%.  This is yet another statistic where offshore outsourcing shows up.  With such large declines it is no wonder the U.S. economy is stunted  Below is the Manufacturing capacity utilization graph, normalized to 2007 raw capacity levels, going back to the 1990's.