$13 million, 13 debates which said ...oops....I can't remember what was said, media black outs on some candidates, talking pundits ad nauseum and 6 months later, the Iowa caucuses are finally over. Thank God! 122,255 people decided who to pick in the Republican Iowa caucuses. That's about one hundred dollars per vote. The millions in spending bought actually a guy who had the least amount of money. Rick Santorum in essence tied with Mitt Romney, he lost by 8 votes, and the guy who has a grassroots libertarian following, Ron Paul, came in 3rd.

Estimates vary on total campaign spending The biggest TV ad spender was Rick Perry at $1.8 million. He even spent more money than the Romney super PACs, which is estimated to be $1.7 million to $2.8 million. MSNBC says the Romney's superPac spent the most:

Restore Our Future, the super PAC founded by three former Romney political aides, spent $2.8 million on ads in Iowa, nearly twice as much as the $1.5 million spent by Romney's own campaign, according to figures compiled for NBC News by Smart Media Group Delta, a media ad tracking firm.

Ron Paul also spent large, with nearly $900,000 spent on TV ads alone. Beyond being inundated with campaign ads, all of this spending didn't do much for the Iowa economy. Not that the money isn't a lot. It is just campaigns spend even more as election 2012 grinds on.

Imagine what America could do with the money spent on elections. Dylan Ratigan ran factoids in his above TV segment on how much $13 million could have bought. Below is his Iowa spending campaign tally. 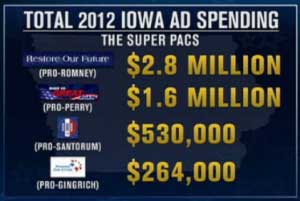 Iowa has been hit with over $16 million in advertising dollars heading into the caucuses.

As Ned described, “Iowa does offer a level playing field to candidates like Rick Santorum who didn’t have name ID or much of a chance to compete with these bigger names. That’s why these ads at the end, in the Des Moines market in particular, there were about $3.5 million spent just by those top candidates and top acts. We saw, as you mentioned Ron Paul and Rick Perry were the two top candidates in this market to spend about $1.5 million.

Oops, I guess it's not over. Unfortunately it's just begun. We are about to be so blasted with political ads and cable noise talking heads, well, I hope you have a DVR and Internet media streaming. Otherwise you might just take one of those bad prescription drugs also advertised 24/7 on cable to shut out the political drumming 24/7.

At least one is over!

If you're wondering how many voted for media blacked out Buddy Roemer, UPI, the only one even noting he is getting votes, reports the tally at 31.

Take note, Ron Paul wants the Austrian school of economic philosophy to banish all Keynesians to the dust heap of history. He also wants to restore the gold standard. Santorum on the other hand, talked about rebuilding U.S. manufacturing. Shame his policies will actually destroy U.S. manufacturing further, but who bothers about the details these days? More ads please!

The thing about politics which is so odious to me is how various politicians are given credibility by the press, when frankly they should not. So many politicians tout policies that are a disaster, simply won't work, by the theory and the statistics, yet they are given the same level of credibility. If a crazy person on the street said such stuff no one would think twice, but run for office and you can promote the most ridiculous stuff.

Hours and hours and hours of cable news coverage on these things and paying attention to policies, actions is 0.00001% of it. They act like they are watching a football game but the American people are the ones being kicked around here.

"Hours and hours and hours of cable news coverage on these things and paying attention to policies, actions is 0.00001% of it." -- Robert Oak

Interesting about Perry spending most on TV ads and coming in last. I don't suppose that outstanding fact is getting a lot of coverage on network TV news!

Also interesting about Santorum, the "guy who had the least amount of money" and tied for first.

At least Santorum talked about a real issue, but you wouldn't likely know that based on most corporate media coverage. The buzz, as far as I can tell, has been that Santorum's surprising success demonstrates continuing political strength of 'evangelical conservatives'. However, Bachman's dismal showing indicates that there may not be much of a real 'evangelical conservative' vote, while also exposing the "tea party" zombie as an empty charade.

Meanwhile, the Washington Post (Ezra Klein's blog) is cited today as pointing out that there's another issue exposed here, calling Santorum the "last Ryan-backer left standing." Is the way being cleared for the GOP to buy an expensive ticket to the White House via the notorious 'Third Rail of Politics'?

The front-runner, Romney, at least talks about confronting China with a protectionist trade policy, although of course, it would never be called that. Why is "protectionist" avoided by the corporate media as a bad word?

Anyway, it's interesting that what the people really care about seems actually to be discernible in the results, although not in typical corporate news coverage, as far as I can tell.

$100 per vote! Incredible! ... although probably accurate.

The circus hasn't exactly begun, but we have been allowed a free tour through the freak show!

are insane (IMHO). They are 1 issue voters, how extreme can someone be against a woman's rights, her body? Seems a bunch live in Iowa. So, Santorum, if anyone remembers this, was one of the Senators pushing to get involved in the terri schiavo case.

These people are off the rails, they would vote to be homeless as long as that person has some extreme anti-women, anti-women's rights, anti-choice, rhetoric, positions.

That's Santorum, one of those guys who claims cells in a Petri dish are a person and so on.

I was amused by Michele Bachmann. Boy, supposedly a lot of these evangelical "Christians" said there cannot be a woman in the lead, i.e. sexism is part of their "beliefs" (lovely).

So, there she is, endorsing some fringe, living by some fringe who just made sure she wouldn't win.

It's kind of amazing to me, these radical religious people. Women, somehow they embrace these extremes as if the "rules" don't apply to them, yet they are endorsing the idea they should be a second class citizen.

Ugh. Anyway, on the economics front, Santorum is mentioning rebuilding U.S. manufacturing. Unfortunately it's that classic GOP twist, they present policies and agendas which will further destroy something, in this case, manufacturing, all the while claiming it will help.

So, Santorum is claiming "regulations" and "taxes" are the reason U.S. manufacturing is languishing, which is ridiculous.

This is what I'm talking about Krugman on Santorum and why my disgust is showing past my data today.

Thanks for pointing out the current Krugman. Yeah, I guess I have to agree with Santorum that things are not the way they are "supposed to be." But I wouldn't want Santorum, or anyone else, deciding for me what that is!

"Evangelical" has been defined as "of, relating to, or being in agreement with the Christian gospel" -- not necessarily a well-defined population. As shown now with LDS members running for president, the term Christian isn't all that well-defined as a demographic descriptor. It seems to me that all who call themselves evangelical or Christian or both are entitled to do so, and also to explain what they mean when they use those terms.

Those whom I would consider to be the most truly "fundamentalist" (Christian) folk, that I know, refuse to become involved in or to discuss politics at all. On religious grounds, they refuse to register to vote, and they also never watch television.

The good news is that people generally seem to be developing some immunity to television and the corporate daily news cycle.

IMO, your blog on the Iowa caucus results has brought out the actual tendency of the majority shown by the Iowa results -- jobs, manufacturing and trade. Pocket book issues.

It's encouraging that people apparently are not as easily fooled as "opinion engineers" would like big-money buyers of TV time to believe.

The reason I mention this is this never ending desire to control women makes economic issues secondary. Additionally, I just have to wonder if these "voters" can even add. It's like Santorum just has to mention keyword manufacturing and people somehow believe he has policy positions that would actually help, which is false. Same with a host of policy positions.

I guess as this goes on (I expect Santorum to be a one hit wonder here), we'll have to delve into some of these positions in statistical detail.

I wrote this simply because I'm already disgusted by this "election". Ratigan rightly calls it an auction, to the highest corporate bidder and I have to agree.

We already know Obama won't do what is needed and here comes worser in so many words.

Still, we'll have to pull apart each issue, one by one, and show the theory, data.

I love Economist Chinn (in the 2011 best of posts), who does go through some of this rhetoric and shows how economically insane it is. That said, if one has people who cannot add up 1 + 1 but think somehow their ideas of cells in a Petri dish should override everything else, well, there is no much hope here.

(Makes me wonder about "home schooling" too, seems so many are basic math addition disabled).

The "never ending desire to control women" does seem to be a persistent characteristic of people who want to legislate morality. Maybe what happened to Bachmann is that such people don't trust any woman to be doing the 'necessary' legislation

BTW: Thanks for pointing to Chinn's EOY blog again. I clicked on the links, and found myself LOL.

The free publicity (the weekly drip torture) received by the republicans via the MSM - PRICELESS! Has anyone put a pen to the value of all that free tv via their debates they have received and will continue to receive until June 2012?

Beyond the free publicity gift, more they get to present pure fiction, I mean some of these "positions" are just that and ad some more sound bytes to make them sound like fact. They go unchallenged or even perpetuated by some in the MSM.

While this post is assuredly a rant, positively disgusted by this spectacle which shows we have no real choice, I had a funny feeling others were perceiving it all as I am.

I could have titled this post as "Why am I paying over $100 bucks a month cable bill for 25 minutes per 60 of commercials (ignoring the ad placement in content) and propaganda and noise?"