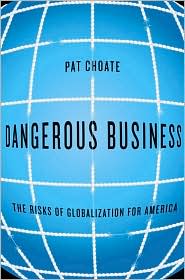 is a must read book on the realities of globalization, trade, the lobbyists surrounding D.C., corporatism and China's modern mercantilism. Choate not only describes some of the corruption, insanity and erosion of the United States through bad trade deals, elitism and globalization, he prescribes solutions.

When Band-Aids No Longer Work

The book is loaded with statistics and many of them will alarm you. Did you know, in the United States, four corporations process 80% of all soybeans, 75% of all corn, 66% of wheat? Four companies control 84% of cattle slaughter, 64% of pork, 50% of chicken and 89% of cereal. Monopolies are no longer seen as a threat, big is in, even when we clearly have a monopolist control over the nation's food supply.

Another interesting fact is that the main committee controlling China are engineers. Choate goes into great depth on precisely how China has restructured it's economy to potentially overtake the United States as the world's dominant global power.

Currently, 149 countries, accounting for approximately 95 percent of all U.S. trade, utilize a border-adjusted, value-added (VAT) tax system implemented at average rate of 15.4 percent.
This tax often is among a country‘s most significant revenue sources to pay for such expenditures as nationalized health care and other vital government services.

Can anyone be surprised that U.S. exports are increasingly uncompetitive when they must overcome such enormous foreign subsidies and import taxes?

Choate goes further on the history of the VAT, the WTO rulings and how to create a similar counter tax to offset the VAT, how imperitive this is to the United States economy and how this can be accomplished.

The AMTAC notes a bill has already been introduced:

One of the most eye-popping revelations is Choate's 40 page appendix documenting the revolving door lobbyist list in D.C.

Included are 121 former Congress members who are now lobbyists, the billions spent by US corporations and foreign countries in lobbying expenditures, and finally a major hint at how former and future government individuals are benefiting financially from these relationships.

It reflects the influence of financial interests in establishing our ad hoc, unfettered policies on globalization and the subsequent staffing of our government to implement those decisions.

Another observation which we can see today with the bipolar stock market:

The frenzied movement of capital in search of short-term returns is undermining our capacity to think and act for the long term.....
speculation has come to dominate long-term investment.

Every page of this book is stuffed with history, facts, statistics and events. If you want trade, economic policy that is in the national interest, working America's interests, Dangerous Business is a bible upon which to swear the oath of activism.

will you put me in conact with mr. choate? i have important imfornation abour steps some foreing nations are taking to overcome the u.s.

i will appreciate your help on thi.

I simply read his book and wrote up a review of it because it's an excellent, very detailed text.

I suggest finding one of his talks and asking him a question there. I know he does public speaking but I do not know his schedule.

It occurs to me that both threaten localization- the idea that one should produce one's goods as close to the customer as possible.