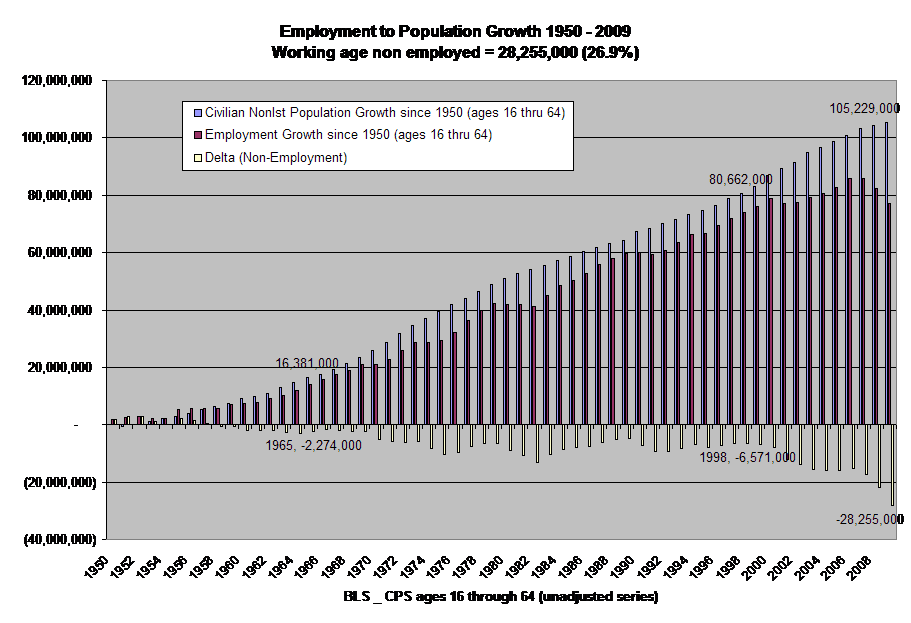 The working age population and working age employment data-subsets are aggregated to produce growth statistic(s) starting from end of year levels in 1949.

One phenomenon to observe is that as the nuanced trend in population inclines, the employment rates decline correspondingly. The converse is also true where the population trend-line would decrease somewhat, employment levels increase.

One thing the U.S. could do to alleviate this non-employment problem is to determine immigration levels dependent upon historical gains and losses in working age employment. Currently, immigration levels are static throughout recessions and early business cycle recovery, these are the times when native workers are the most vulnerable to immigrant labor "crowding-out."

By observing the employment growth statistic as a metric for governing legal immigration quotas, the government may find the resources and motivation to curb visa-overstays and illegal immigation if policy objectives included higher legal immigration levels.

Employment growth is determined with the same formula using the "Employed" CPS datasets.

Blogpost for detailed information on H-1B and L-1 visa, IT employment and IT college degrees conferred.

Every unemployment report the graphs of civilian pop., participation rate, are graphed up via the St. Louis Fed here. Then last report, I did a few more graphs hunting out the unemployed, here.

Finally, there is an entire labor economics forum, here.

Firstly, what are your raw stats? Where are you getting these from? The definition of civilian population is those 16 or older not in the military or institutions (i.e. mental hospitals, prisons, etc.) So this includes people over the age of 65.

It appears somehow you got the subset, below age 65, but from where? Link?

Where are you getting those numbers of H-1B, L-1 in total? I'm pretty sure you're on the money but when it comes to these issues, because the BLS subsets, the definitions are pretty obscure and then on top of things, they refuse to count by immigration status and of course getting an accurate tally of offshore outsourced jobs...
one can only estimate....

we need to do triple checks on numbers. EP is a news source, so it's up to us to make sure we're accurate here.

To be clear, the graph represents non-employed not unemployed. So the graph represets the Unemployed plus the Not in The Labor Force for the working age population. I find it astounding that the number(s) and percentages have tripled since EOY 1998.

For each year in the NonInst Population (16 and over) I subtract the total of the prior year's population to find yearly growth. I did the same with the 65 and over age group to find growth in the non working age population and subtract the over age from the total NICP in each year. The same formula is applied to BLS CPS "Employed" in the two age ranges.

Again, the negative numers in the graph is the delta below full employment (100%) for display purposes.

The H-1B numbers are factual from the recently released H-1B Characteristics reports at USCIS -- 52% of IT employment growth was absorbed by new H-1B issued in computer-related occupations when comparing to OES growth data for the same six year period.

I estimated the L-1 visa, with a percentage rate drawn from IT related characteristics across the number of L-1 visas issued (to arrive at an estimated number of computer related L-1 workers) and the foreign labor share of new IT employment was over 80%.

The US IT College degrees conferred data is from NSF - IPEDS

As for my conclusion concerning illegal and overstaying immigrants, the metric I've developed here from historical data would indicate to policy makers to lower or raise legal immigration quotas in the following years based upon the prior year(s)non-employment rate. Yes, it is true that BLS does not concern itself with immigration status, presumably the NonInst Civ Population includes everyone, so we use it as the basis for the employment performance metric.

All I know about outsourced jobs is that India employs 2 mllion in IT and the sector is worth over 50 Billion USD per year to India.

surely others have estimated 16-64 page from civilian pop? Have you checked with other estimates? That sounds perfectly reason to me as a method.

I think generally when making estimates, to clearly point out your methodology. While the "immigration" argument is visiting EP obviously, that's how we get spin papers or overestimates and when assumptions methods are not listed, it makes the situation worse.

(obviously they haven't read the national accounts methods from the BEA...go jump on those methods please! :))

I can validate the $50B USD of the offshore outsourcing industry, I don't know if it's just 2 million (I'm assuming you mean geographically located in India), that sounds low for some reason.

This is something that truly bothered me about "Stimulus", they completely ignored the government contracts already offshore outsourced and insourced.

The obvious "stimulus" was to simply cancel those contracts and bring them back here, hire Americans. you didn't even have to increase spending to do that. Notice how that idea never hits the national dialog? I mean 'shovel ready projects'
...gee, how long does it take to set up a call center here and train people to read scripts? (many support centers for food stamps, they offshore outsourced those jobs, as an example).

Linked to my blog for H-1B oversubscription -- couple pages of source material there. This post alreay getting very busy with sources in the footer,

This site, the only credibility we have is accuracy, citations, and you are writing in areas that the "spin is in", intensively so.

The fact that new H1-B immigrants were hired to fill over half of the IT jobs over the last few years is a clear indication of US corporate intent to lower wages in that sector, and an indication of how US corporations have bought legislative influence. No doubt but that this pattern is repeated in other high paying industries. The recent Supreme Court decision allowing for corporate purchase of the government just makes it a done deal.

The offshore outsourcing/global labor arbitrage/H-1B/L-1 lobbyists are out in full force, busy attacking EPI and putting up their fictional snow as "proof". That's the problem with white papers, hardly anyone reads them! It takes time to read these things and realize major statistical flaws, it's almost the same technique as derivatives. Few can follow and then give up, think something is valid and it takes some serious digging to see the flaws.

I believe lobbyists snow Congress with these things but they put together one page bullet point marketing glossies with their "summaries". Because few read the actual white papers, much less realize the faulty data and methods...wala, the lie is implanted!

That's why we need sites like EP, where we are not being paid to spin lies, we have no other motivation except to point out the lies of others. We don't have anything on the line (besides our day jobs).

A lot of the junk science in the labor market is coming from the National Foundation for American Policy (NFAP). The inferences, carefully worded and presented by the NFAP are misquoted in other publications and then paraphrased in the media until "inferences" are presented as fact. The NFAP did a study on vacancies in major U.S. companies, I took a little time to look at these numbers objectively and found that the NFAP was crying wolf about an overall vacancy rate of 2.27%

Here's a snip from an NFAP press release, notice the careful use of the terms, "believed", "thought" and "potentially".

Fifty-two percent of companies believed that for every H-1B professional they hired it created one or more complementary jobs at their firms or in the U.S. economy. Twenty-two percent thought the hiring of an H-1B visa holder created 10 or more jobs. Seventy-four percent of company respondents said an inability to fill positions because of the lack of H-1B visas has potentially affected their “company’s competitiveness against foreign competitors or in international markets.”

Right I think that's a lobbyist of one, bought and paid for. I think they also assume people will just believe them instead of reading their economic fiction.

Weaver, please format your links and display the images by properly formatting them. There is a user guide on the right hand column to help with any formatting issues.

Fixed the raw links in the post -- guess I'm old school -- I like to see the published link match up with the destination in my browser before I click.

to see the link underneath. SEO and any publishers require posts be professionally formatted or they will not parse and index them. Same with graphs, they need to be visible, easily readable.