Good Jobs First has released a new study which shows most state's corporate tax incentives and subsidies don't work to create jobs and pay living wages. Corporations are getting subsidies and tax breaks and instead of requirements to support the State's labor force, 43% of these subsidies are glorified corporate welfare. State corporate subsidies cost $11 billion a year and $7 billion worth of them do not require job creation and living wages. From the report, Job Creation and Job Quality Standards in State Economic Development Subsidy Programs:

Good Jobs First has interactive tools and corporate subsidy databases on their website for more digging. Here's a table that caught my eye from the report. A list of programs with no qualifying requirements at all and their costs tallying up to $1.3 billion bucks. 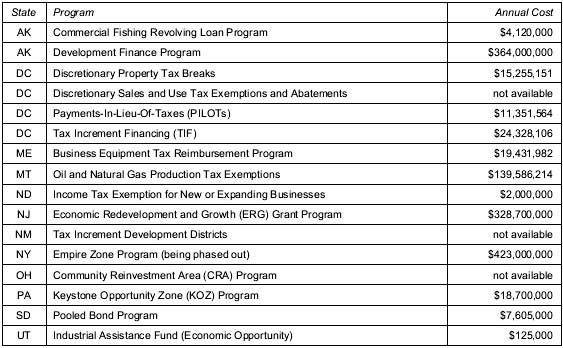 One thing that is missing from the report is a mention workers should be U.S. citizens or permanent residents. If a foreign guest worker or illegal immigrant is being hired and trained with taxpayer money, which has happened many times in the past, that does nothing to help create jobs for Americans or State residents.(Regardless of whatever corporate lobbyist economic fiction propaganda one might have seen, displacing U.S. workers is a job loss, not a gain).

The New York Times gives a typical example of what happens when corporations threaten to leave a state...or else if they don't get their tax subsidy candy:

States’ desperation to hold on to jobs was vividly illustrated this week in Illinois, which is so short of money that it has been unable to pay its bills on time in recent years. After Sears and the Chicago Mercantile Exchange were courted by other states, the Illinois Legislature passed large tax breaks to keep them where they are, over the objections of protesters who unfurled a “Stop Corporate Extortion” banner in the Illinois House chamber on Monday.

One has to wonder why is it legislators these days can give subsidies, corporate welfare, outsource major functions of government, privatize everything not nailed down (and that too), and no one blinks an eye. Yet if governments attempt to run their own direct job programs, plain create jobs directly, all alarm bells ring as if the nation is on fire. Perhaps that too is due to corporate lobbyists. Last thing they want is to be shut out as the great middle men to the economic and job flood gates. Surely a government run direct jobs program is more efficient than this. The report quotes one study which found each job created through subsidies cost $100,000.

The role of site location consultants in pushing states and localities to bid against one another, especially for big projects, routinely resulting in subsidy packages of more than $100,000 per job.