The December to January BLS employment report is always a strange beast.  Yet this year we magically have gained 647,000 jobs which previously did not exist.  Below is the difference between the previously reported jobs in December to the payroll tally for January 2013. 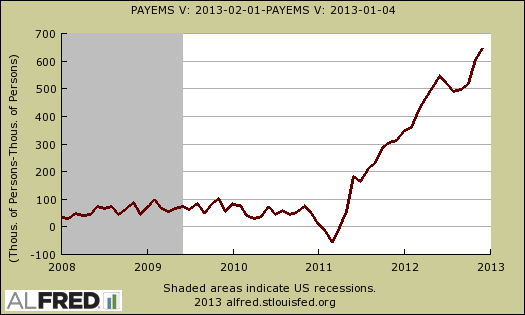 Every year the BLS readjusts estimates with benchmarks from March and this time they added 424,000 jobs, a 0.3% increase in previously estimated total national payrolls,  not seasonally adjusted.   Poof, 647,000 jobs appear which previously did not exist in the seasonally adjusted figures.   Below are the employment levels previously reported in December (blue) to the new ones released for January (red). 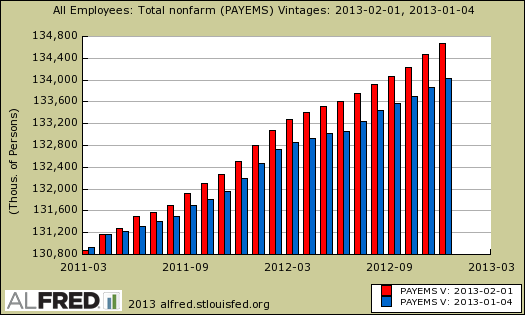 Statistical alchemy?  Not really.  There is no numeric magical wand at our most beleaguered statistical agency.  Instead, the BLS revises their  employment figures annually based on other statistics as they come in.  The BLS uses a birth/death model of businesses to estimate the number of new businesses and their corresponding payrolls created for the year as well as the closing of businesses and thus loss of jobs. The reason they have a birth/death model in the fist place is due to statistical lag.  Counties are responsible to collecting business unemployment insurance tax data and it can be at least nine months before this information is collected.   Every business with employees must report. their payrolls to the county and pay up on their side of unemployment insurance for their hires.    New businesses grow and hire rapidly which, due to the nature of business unemployment insurance county tax reporting, causes even more statistical lag.   Eventually county business statistics catch up on their payroll unemployment insurance tax records and those statistics are used to reality check the BLS birth/death business model figures. The BLS then adjusts their payroll counts to the actual statistics reported by the nation's counties.  These adjustments are performed in March of each year and the BLS incorporates those benchmark figures into the next year's January payroll report.  For more information on the establishment survey benchmarks, you can read this article.

As a result of those 2012 benchmarks, the United States is now down 3.217 million jobs from December 2007, five years and 1 month ago. The start of the great recession was declared by the NBER to be December 2007. The below graph is a running tally of how many official jobs are permanently lost, from the establishment survey since December 2007. So, in spite of revisions, the United States still very much has a jobs crisis. Over half a decade has passed and America's population which has the potential to work has grown by 11.5 million people. You do the math.

Yeah, let's say it, because that's all that matters to the elite. And for those that think that red vs. blue matters, wake the f up. It's elitism vs. you, it's 1% vs. you. Are your children or siblings jumping right into consultancies, network news, business, Wall Street? Of course not, this is the really real world where merit means jacksh*t and connections and corruption and profits above your fellow Americans is ALL.

Read the local news. Those "unattended" and "suspicious" deaths that are happening with increasing frequency since 2007, they are suicides. Your friends, your neighbors, etc., in a land with 20%+ of the population experiencing unemployment for more than 3, 4, or 5+ years of unemployment, what do you think would happen? Jesus, what do these people with IQs of 100 in Congress think would happen (if they think between collecting payoffs)? And for those that blame the red or blue, save it, they both love the misery because they owe their allegiance to the corporate/bankster masters wherever they reside (e.g., see Morsi/Lockheed deal - military-industrial complex says what). The Gilded Age Redux - only in 2013, it's more corrupt. Mark Twain would be silenced by a drone brought to you by a defense contractor that loves both Democrats and Republicans and pays millions to both parties because the Founding Fathers would love 24/7 surveillance and bombs in America and overseas (probably not). USA 2013! AWESOME!

Damn you Bill of Rights, how dare you stand in the way of PROFITS and selling out America's national security to foreign nations!

The press and Wall street are diverging from all sorts of economic indicators. Clearly the uber-rich are "sick" of a weak economy, so metrics be damned, let's all pretend it's recovery time. I'm not kidding and I hope to play catch up, even though they will all be late overviews as well as some posts on why this is simply not the 14000 DOW. Seriously this is beyond belief and traders have to be doing some sort of HFT whatever nonsense. More soon.

Think I finally found the comment bug, hopefully fixed as well this weekend.