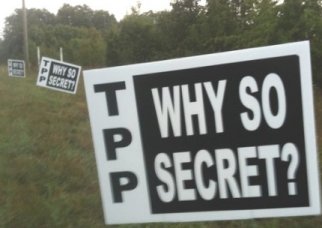 The only groups that benefit from these trade agreements are big transnational corporations who offshore jobs to get cheaper labor, lower taxes and less regulations. Just recently Senator Elizabeth Warren has announced she will oppose President Obama’s nominee for the new U.S. Trade Representative, Michael Froman, in part due to his stance on the Trans-Pacific Partnership (TPP).

Anti-globalization advocates accuse the TPP of going far beyond the realm of tariff reduction and trade promotion, granting unprecedented power to corporations and infringing upon consumer, labor, and environmental interests. One widely republished article says,

"This isn’t just a bad trade agreement, it’s a wish list of the 1% -- a worldwide corporate power grab of enormous proportions. Of the 26 chapters under negotiation, only a few have to do directly with trade. The other chapters enshrine new rights and privileges for major corporations, while weakening the power of nation states to oppose them."

This outrageous trade agreement has been negotiated in secret for four years. It was put together mostly by a few hundred corporate advisers and lobbyists who participated in the backroom closed-door deals, and dictated to the US government just exactly what they expected from the treaty --- even if it means relinquishing control of American sovereignty and trade policies to globalists (and possibly communists). Obama is a globalist,
which is defined as "a person who advocates a policy of placing the interests of the entire world [other countries] above those of individual nations" [the United States].

From The New American: "It is evident that the Obama administration is somehow willing to tie the economic prosperity of the United States to much weaker countries. Beyond the economic disparity of the TPP, there is the damage to American sovereignty that will accompany acceptance of the TPP. The biggest step toward globalization and a severing of any political control by the elected representatives of the American people over the establishment of trade policy will come from the achievement of the ultimate aim of the TPP: creation of a Free Trade Area of the Asia-Pacific."

Many of the least popular corporations in America --- e.g. Monsanto, Nike, Exxon-Mobil, Chevron, Wal-Mart, etc. --- and the big pharmaceuticals and big financial firms --- are all involved in pushing for this agreement. People also need to know that the former US Trade Representative, Ron Kirk (who is now a lobbyist for multi-national corporations) has said that if the people knew what was in this agreement it would be so unpopular that it could not be signed. (See the New York Times piece: Obama's Convert Trade Deal from June 2, 2013).

In fact, over and over again people have stopped trade agreements in the past, which is why President Obama has taken a secret path on the TPP. He knows that if the people organize and resist, it will not become law. Since 1999, a dozen agreements have been stopped and FlushTheTPP.org has developed a strategy based on what has stopped previous agreements. The bottom line is that the TPP will mean corporations will be dominating all aspects of our lives...more so that they already do.

The first step is to educate the public about the contents of the agreement. FlushTheTPP.org is an action oriented website and provides quick, easily-understandable information and tools. This is where you are needed to hold #TPPTuesdays (tools) actions around the country, focused on some of the corporations that are involved in negotiating or advising on the TPP. (To help educate, you can order or print the new TPP OccuCard to hand out at your action.) Here is a first in a series of videos by “The Naked Emperor,” featuring Oli Garch --- this one, focusing on how Monsanto is dominating food negotiations.

What we see from Brazil to Egypt to Turkey is the importance of building a mass movement and acting in solidarity. Stopping the TPP is a necessity for both the people in the US as well the rest of global community, because every issue that people care about will be negatively impacted by the TPP.

Talk is cheap. Obama now supports a trade agreement that, as a candidate, he once said he opposed. But less and less people are falling for Obama’s rhetoric and are now watching what he's actually doing --- and people are being prompted into action. Obama may "talk" a lot about the offshoring of jobs and the declining middle-class, but his corporate-approved actions speak much more loudly than his populist words.

And besides crony capitalism and corporate welfare, both the Tea Party Patriots and the Occupy Wall Street movement (and everyone in between) all seem to agree on this issue..."No to the Trans-Pacific Partnership!" 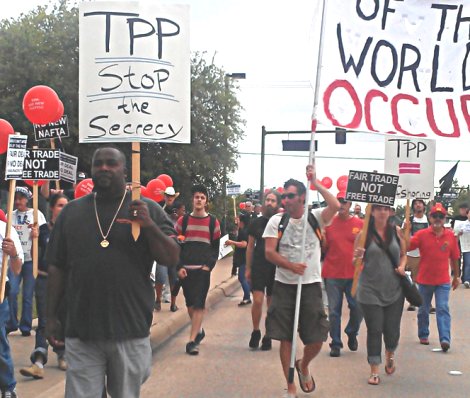 * Take the pledge now to join or plan an action. It is simple to do. And share the pledge with your community.

i've been involved with a local anti-fracking group, some of whom understand that the TPP will allow multinational corporations to overrule local ordinances...moreover, politicians should understand that they can be sued by these corpoations for foregone profits should a local law impede their attempts to pillage the countryside...

here's the sierra club statement on Japan's joining the TPP negotiations, which also links to sierra club fact sheets on the TPP:
http://content.sierraclub.org/press-releases/2013/03/sierra-club-stateme...

In the "News" section are updated headlines from other sites. Eyes on trade, Public Citizen is the best for deep analysis on TPP.

Think about the billions spent for Presidential elections to end up with the exact same agenda as the Bush administration, which was the same as the Clinton Administration.

Corporate written bad trade deals is at the top of the list for absolutely no difference no matter who is elected.

Not only do multi-national corporations influence our government agencies, they are also pushing for greater corporate rights, including the right to sue governments for loss of expected profits from environmental, labor and consumer protection laws through the TransPacific Partnership (TPP) and its sister the Trans-Atlantic Trade and Investment Partnership (TTIP). Nobel laureate and economist Joseph Stiglitz calls them a “Free Trade Charade.”

A new study from the Center for Economic and Policy Research (CEPR) shows that the vast majority of U.S. workers would see wage losses as a result of the pending "free trade agreement" called the Trans-Pacific Partnership (TPP) --- while estimates of U.S. economic gains would be very small --- only 0.13 percent of GDP by 2025.

Most major cable and broadcast news outlets have largely ignored the controversial Trans-Pacific Partnership trade deal. It's worth noting that while these media companies have chosen to conceal the deal from their viewers, behind closed doors, they are spending a considerable sum ensuring that they emerge as beneficiaries of the TPP.

Next week, negotiators will meet in Washington, DC for another round of negotiations on the Trans-Pacific Partnership (TPP). The Alliance for Retired Americans strongly opposes this so-called free trade deal for several reasons. For starters, it has the potential to ship jobs overseas, further endanger the quality of our food supply, and make prescription drugs more costly.

Due to public pressure, last month European trade negotiators announced they will be releasing their positions on trade to the public. They wanted to release the text of the full agreement -- but the Obama administration continues to insist on secrecy.
http://ec.europa.eu/news/2014/docs/c_2014_9052_en.pdf

This week President Obama told CEO’s of transnational corporations, which will profit from rigged trade at the expense of the people and planet, that he is willing to defy Democrats and work with Republicans to pass fast track.
https://www.popularresistance.org/obama-ready-to-defy-base-in-order-to-a...