Hollings recommends instituting a VAT. It's an excellent, fire breathing Populist read and it happens to be backed up by his own experience as a Senator.

this thing is a bad, bad, bad idea.

It will end up being implemented as a national sales tax, and will further place the burden on lower income Americans by helping to eliminate progressive income taxes that are able to actually increase public well-being, because they recognize that taxation should target higher incomes because there is a declining marginal utility of income.

My suggestion would be to that any VAT should only be implemented in against intra-business transfers, so as to target offshore outsourcing of production. Do rebates back for the multiplier impact of wages, and income taxes, paid in the US, and you have something.

But as a simple across the board tool implemented at the retail level, recognize that for what it is: a regressive national sales tax.

I've looked into this and unfortunately "some people" who really do not understand the "at the border" VAT adjustments claim it's a regressive sales tax. It does not have to be structured that way. But it is a legal WTO method to equalize trade.

I've written numerous posts on this already. One can offset the "regressivity" to get the benefit of it as a trade tool by domestic tax restructuring.

But it is not a "flat tax" or a national sales tax. It's item specific and literally can be changed dynamically, per item, all legal under the WTO. That's what China is doing too.

So, don't just dismiss this out of hand and miscategorize it for it's a strong tool for trade that the WTO already rules is legal and we've got about 140 countries using it against the US and increasing our trade deficit.

Read the China report I just overviewed (the actual report details in the link) on how China manipulates their VAT for trade advantage.

Don't mean to beat that same horse over and over again, but one need not even look at all those other dismal and toxic appointments of the Bush/Obama Administration --- simply take a close look at Diana Farrell --- Diana of the "we must offshore as many American jobs as possible."

Diana Farrell who edited, "Offshoring" and the author of that pathetic McKinsey Global Institute report proclaiming that as many American jobs as possible should be offshored --- it is sooooooo profitable, after all!

But do take a closer look at all the rest of his administration's appointments --- they pretty much mirror Farrell.

Yeah. There are some people, who beyond violating even the most basic macro economic equations, well, anybody with a 2nd grade education know it's just ridiculous and will do the opposite of what they claim.

I'm getting kind of sick of it, well very sick of it. I mean it is very possible to craft common sense policy and legislation to strengthen the US, workers, middle class and so forth but instead when get these just completely absurd claims going on that frankly I don't see why anyone should be required to even hear such drivel.

I'm sick of them even getting paper to write on, never mind any air or press time.

We need serious policy modifications in this country and instead we get these "crazies" frankly, throwing out stuff that's just beyond the pale.

I shake my head. But that's also why we're here. We are the peanut gallery, we are some of working America...therefore I believe we're perfectly capable of commenting on what kind of economic policies we need.

Great blog and catch, and I've always found Senator Hollings to be in that smallest of minorities, an honest senator!

I recall, just prior to being shipped overseas back in '70, perusing several separate articles from an antiquated military base library, one dated from the early '60s, by Upton Sinclair; the other dated in the late '60s by author Taylor Caldwell -- two people from seemingly opposite ends of the political spectrum.

While the articles were written by two separate individuals and separated by a number of years, they read almost identically the same (I admit to being somewhat skeptical at the time).

Both detailed how they had been invited to a celebration at a place in California called the Bohemian Grove, and each was briefed on the long-range plans of the ruling plutocrats. America, sometime in the early part of the 21st century, was due to be the next low-wage center, with the majority reduced to economic serfdom and the dissolution of any remaining middle-class (anathema to the plutocracy, of course!).

Now, it may seem odd that Upton Sinclair (and it did to me at the time, hence my skepticism) should be invited to such a gathering. But way back way, a guy named Ronald Reagan was a flaming liberal, and they certainly ended up turning him!

Well, much time has passed, and I'm certainly not skeptical any longer. The facts, and levels of existing corruption speak for themselves.

This a graph of Durable Goods Manufacturing Employment (gross): 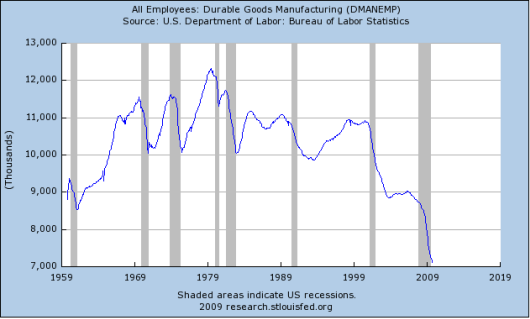 Here is the annual percent change: 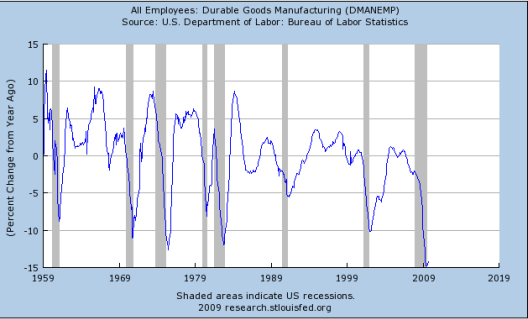 Do you notice a downward trend?

Might put in there % of GDP and I believe Ralph Gomory, if I can dig that out, it might be in one of his talks, or someone has shown that manufacturing also spawns quite a bit of advanced R&D, so it has affects in other sectors not quite counted as manufacturing.

The video below is quite good. It is dated, but warns of the dire consequences of GATT/NAFTA.

Maybe I should do a FMN that is just all of the dire warnings and consequences about bad trade deals that were completely ignored.

I think the corporate lobbyist takeover was really sealed with the passage of NAFTA.

Nobody mentions it in the 1994 GOP election sweep either.