Even worse, 1.4 million of those jobs were lost since the start of the great recession. 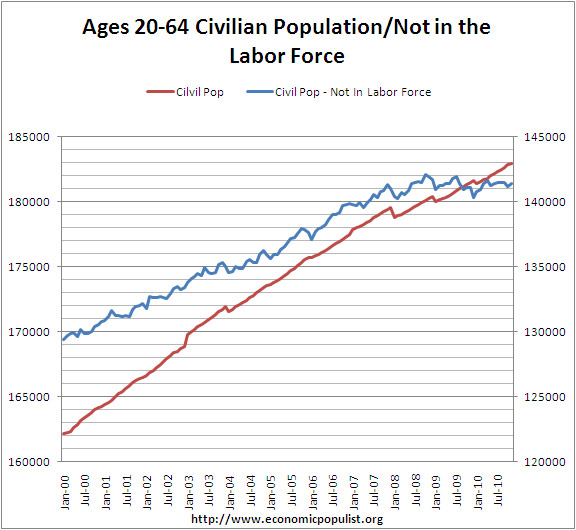 From these numbers and just looking at the more common working ages, we see the two metrics have diverged. In other words, a lot of people are falling into not in the labor force disproportionately. From the graphs we also need a good 3.1 million additional jobs, to account for increased population growth, to come out with the same unemployment rates of December 2007. That's 10.5 million jobs and this estimate is conservative, ignoring those under the age of 20 or over the age of 64 for this exercise to locate the desperate & missing who need a job.

Notice how the slope of the civilian population increases yet when one subtracts off those not in the labor force, starting with the great recession, the values decline. In other words, even thoough the population is increasing and this is just the common working population, 20 to 64, more and more people are not working, not being counted at all. 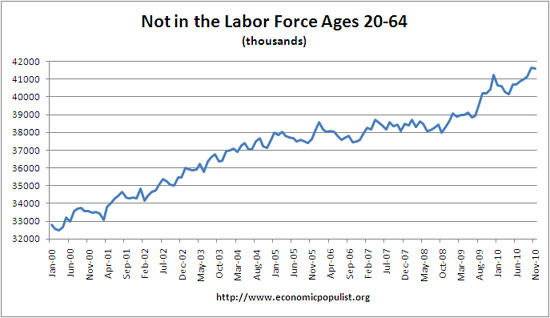 The civilian non-institutional population includes all who are not in prison, jail, nursing homes, hospitals and other institutions or are in the armed forces. Those not in the labor force are people within the civilian non-institutional population who haven't been tallied in the unemployment statistics, mainly because they have not looked for a job in a month for whatever reason, including school, babies and winning the lottery. Discouraged workers and marginally attached are part of those not in the labor force.

Below is a graph of the projected job losses by corporations with over $1 billion in revenue in HR, I.T., Procurement and Finance and the breakdown of reasons by The Hackett Group. It's clearly more dismal than even the new Federal Reserve unemployment projections. Look at the reasons, even with economic growth, due to offshore outsourcing we are looking at net job losses. 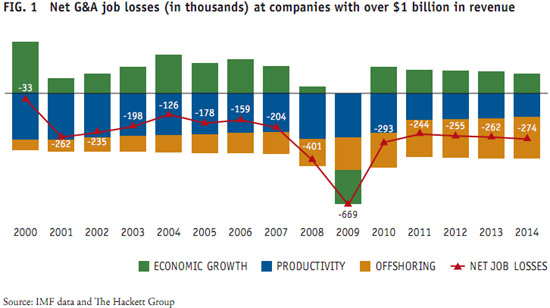 As you can see, offshore outsourcing is a huge percentage of these job losses, so those who claim productivity by technological advances and ignoring globalization are denying what's really happening to the U.S. workforce.

The Hackett Group is not a U.S. labor organization, but this report makes no bones about the dire news for the U.S. worker:

The Hackett Group shows that for the foreseeable future, the human resources, information technology, finance and procurement organizations of corporate America and Europe will continue to be a source of net job destruction, and hence one of the factors explaining the “jobless recovery”. 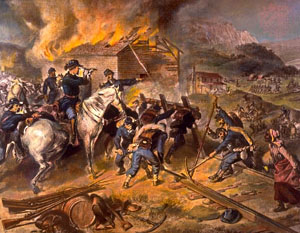 The U.S. worker suffers and even what is left of meager social security to make sure people don't starve is under attack. Multinational corporations are busy making their global labor arbitrage a reality. They don't care about nations or the United States and especially the American worker. Either does the White House or Congress for that matter. It's global labor arbitrage all the way, baby, and the U.S. worker be damned. Who cares if it destroys the nation in their eyes. Multinational corporations own the government and the politicians and increasingly the courts through legal costs. Regardless of the statistics pleading despairingly for these multinationals to stop, their siege against the U.S. middle class, is like Sherman's march pillaging the South during the Civil War. All is progressing as planned.

The cap is identical though. Notice the same amount, 25 million, is the scale for post.

The scale is thousands.

The point is to show these two lines have crossed and that's where the missing unemployed, ages 20-64 are. The unemployment rate for those 16-20 is much higher and we know, due to the never ending robbing of retirement funds, a lot of people over the age of 65 are working.

We need to talk about wages, not jobs, even though they amount to the same thing. Trade, immigration, and automation all cause unemployment, which, in turn, require wages to fall in order to restore the total volume of employment. Sink wages low enough and we can start employing children again -- families will be forced to if they want food and shelter.

if I can get to it, I'll try to find data on the new jobs and their wages vs. average wage. Average wage overall, is beyond belief flat, but there is more to that story, firstly in the median wage and then to the new jobs as well as by occupational sector wages. I promise to write it up if I can locate that breakdown of the data.

The problem can be solved by us the individual. b4U - b4US - b4USA.com