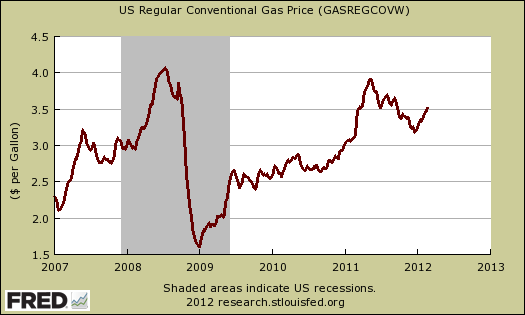 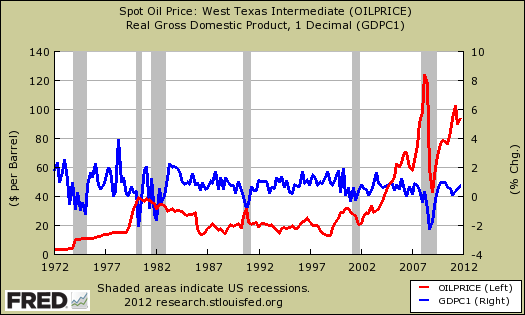 West Texas Intermediate was used simply because the data goes back far enough to capture the oil crises of the 1970's. As James Hamilton notes, Brent crude and the West Texas oil price have diverged, due to distribution systems. 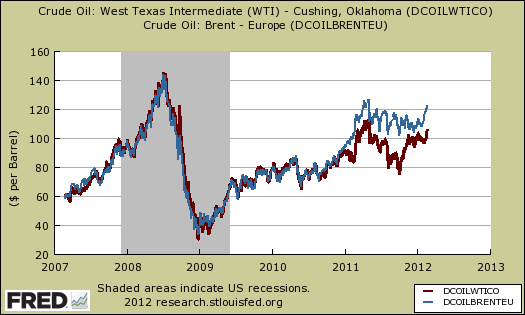 Two of the popular benchmarks are West Texas Intermediate, traded in Oklahoma, and North Sea Brent. Historically these two prices were quite close, and it didn't matter which one you referenced. But due to a lack of adequate transportation infrastructure in the United States, the two prices have diverged significantly over the last year.

Some say it's Iran and the tensions in the gulf causing Europe, in particular, to horde oil against future potential shortages.

We're seeing panic buying in Europe and Asia because they're absolutely convinced that they're not going to be able to buy Iranian oil or there's going to be some kind of conflict that disrupts the transport of oil through the Strait of Hormuz.... there is a lot of hoarding in case the worst-case scenario happens. Asian buyers have been buying up West African crude like it's going out of style.

Others point to nuclear threats and battleship movements in the straits of Hormuz. Is the sudden oil price spike, literally changing in minutes, only due to Iran?

In 2008, five oil speculators made off with $50 million by manipulating prices. Last fall, leaked documents proved oil speculation was behind the 2008 spike in prices.

The volume makes clear that not only were Goldman Sachs and Morgan Stanley, as well as pension and sovereign wealth funds, among the top participants in the oil speculation bubble, but so were politically connected hedge funds. Elliott Management, one of the top hedge funds revealed by the documents, is led by Paul Singer, a billionaire investor and a major donor to Karl Rove’s network of attack groups and to Republicans on the Financial Services Committee.

So, now we know another thing, $5 gas can sway elections. We also know oil price increases and supply shortages can be used to justify war and military action.

With all that we know, what has happened to do something about curtailing speculative oil traders? Not much. While hearing about oil speculators jacking up prices, in terms of stopping excessive market manipulation and speculation, it's like ground hog day. Literally speculators, not producers and users of oil, now make up 70% of the total oil commodities trading.

CFTC Commissioner Bart Chilton seems to be hopping mad nothing has been done about oil speculation and said in a February 24th speech:

The CFTC has not yet been able to implement Congressionally-mandated position limits to put the brakes on excessive speculation in oil and other commodity markets. Meanwhile, trade associations representing Wall Street interests have sued us in federal court in order to impede our imposition of position limits.

So, I find myself repeating—and repeating—the same message: it’s high time to kick it in gear and use the one tool we have to appropriately address high oil and gas prices.

In Chilton's speech are some incredible facts on what oil speculation does to the price of a barrel of crude. Yes, you and I are paying to line the pockets of Wall Street. What a surprise.

A Goldman Sachs study last year stated that each million barrels of net speculative length in the markets adds as much as 8 to 10 cents to the price of a barrel of crude oil. As of February 23, 2012, the CFTC Commitment of Traders Report showed that “managed money” held net positions in NYMEX crude oil contracts equivalent to 233.9 million barrels. Using the Goldman Sachs research figure, and multiplying 10 cents times 233.9 million would mean that, theoretically, there’s a “speculative premium” of as much as $23.39 a barrel in the price of NYMEX crude oil.

Chilton even went on ABC news to talk about how speculative traders are raising the price of gas.

Well, well, it appears clear to us at least, we have at least one CFTC commissioner trying to do his job. You do the math on why we can't get anywhere.

Remember, soaring oil prices literally can cripple the entire economy. When will the people override Wall Street and stop this insanity?

Beyond conserve, all you can do is write your Congress and the President and demand they enact CFTC rules to stop oil speculation. The economy depends on it. So does your pocketbook. Literally as this article was written, prices increased another 10¢ down the street.

Great graph. I had to study it and the line colors are at the bottom. After staring at it for awhile I see what you mean. Seems that the focus on 2008 quickly shifted to the banks but earlier in the year it was oil/gas killing us.

THE US HAS BECOME A NET----EXPORTER ---OF PETROLEUM PRODUCTS.
FIRST TIME IN 62 YEARS
US OIL COMPANIES ARE NOW EXPORTING OIL:
THEY BLAME FALLING US DEMAND

First of all, The Canadian oil line should have been done, second, sice number 1 solution hasn't been done why not go back to way things were ran in the 1900s and before that even, with gasifiers! Yes it would look tacky but the prices would be way better, and its a renewable sorce. why doesnt America use them anymore? Are they forgotton?

Why do you suppose the Keystone Pipeline travels to the Gulf of Mexico
and does not stop anywhere in the Midwestern or Southern refineries? The answer
is just what Canada says: the refined product is going to Asia. Canada makes the
extra point that the pipleline could have been constructed from Alberta to Vancouver.
Again, the oil is going to Asia. Just keep repeating that phrase.

this is the first statement that has said as to that the oil is not going to US usage, and instead to ASIA...(which I have heard already, but not seen in print)...I live close to Port Arthur Texas, and north of Lac Charles LA, and know of the local producers...as a student of economics and political science, I see no reason that the oil from 'CANADA" oil sands, via pipeline to ST Louis...therefore closer to the markets of Chicago, Nashville, ST Louis, and Detroit markets..

Why continue to build a new pipeline further than ST Louis, and then on to Port Arthur, to be refined and reship by trucks to the mid-west...

There is some smoke and mirrors going on here...this message of the oil product being shipped to ASIA needs to be gotten out...fast...

The Petroleum Institute, the organ for the Petroleum Republic wants us to believe that Alberta Tar Sands will fill the import void. This pipeline will move heavy crude to the Gulf where it will stress the production limits of refineries producing close to limits. From there, the oil will travel through the Panama Canal, to Asia. Sorry to spoil your day, but no gasoine from Keystone XL in the U.S. The Petroleum Republic did this with the Alaska Pipeline in 1977 and sent the crude to Japan. game game, new generation of suckers.

Maybe the game is more refineries in Lousiiana? Perfect. But if no refineries are built, the capacity of Gulf refineries will be strained, likely crowding out crude produced in the Gulf. So not only will the refined product from Keystone go to Asia, but, we may get less refined petroleum product as a result!

To be sure that the tar sand crude is actually going to Asis, the Canadian ambassador protested to Clinton earlier that, "we could have built the pipeline from Alberta to Vancouver". Get it? One way or another, that oil is going to Asia.

I have read somewhere that several refineries in the southwest are "down for maintenance".How much would that impact prices?Who owns these facilities?

I've read that too but there is a new article (see the top of the list) that demand is 40% of the reason for price increases. A slow economy greatly reduces demand. People think of themselves, driving their car but industry uses a lot of oil/energy for production and shipping.

Eyeball the long-term price chart of oil, and you can see a classic head-and-shoulders pattern, There is a major top coming in the next 3-5 years. This is not to play down the manipulation theory. The best case I have seen is the EIA charts. The futures and spot prices all spike but the consumption hardly changes. There is a real divergence between price and demand. Why would demand be so stable or weak, and price be so frothy? Look at the futures and cash prices. These markets are the raw meat of the oil speculators.

Looked at a monthly list of gas prices 1978-2000. The price hovered around $1.00 that 22 year period. $2,$3,$4+ gas was n-e-v-e-r sustained for 22 straight years. The minute Gramm's futures deregulation kicked in (2000) we started to see $2-$4+ gas. It only fell briefly when the entire economy imploded and WS liquidity dried up. It has since predictably rebounded along with the market. $2-$4+ NEVER EXISTED before deregulation.

FIRE THEM ALL FOR DERELICTION OF DUTY!

Obama is wholly owned by Wall Street and speculators worldwide. It is foolish to assume every issue boils down to simply GOP verse Obama. Those who swing the elections are Independents be they conservative or liberal. At this point despite the Keystone pipeline being temporarily stalled, it is Warren Buffets company Burlington Northern Santa Fe, a union company, transports via rail to the gulf refineries. A puppet-master who frequents the Obama dinner table. Oil companies provide many union jobs! Obama has capped our domestic production and several East Coast refineries were just slated for closure. Obama himself can be seen on YouTube during news broadcasts stating he sought to put the oil and coal industries out of business. Yes, union jobs. Learn to speak for a real cause and not just a singular political party. I will never register as a Republican or Democrat since I do believe in freedom of choice and the power of the people.

Obama is for unions and unions are for Obama.

This is only one reason why oil and coal must be replaced as soon as possible: Oil spills a lot.

This chart showing the definitions of oil and gas type of quotes you'll see in the financial press might be useful to people. For example, brent crude is one market and then there are three ports quoted for gas.