Chris Bowers at Open Left had a post yesterday about a spokespersons response to this AIG-NY Fed email scandal. Chris rightfully points out the complete and utter disconnect between Wall Street-Washington DC mafia and what the rest of us are experiencing. Included in Chris' insight is the quote for a treasury department spokesperson (actual quote from this article by Shahien Nasiripour):

The Treasury's response this morning is, essentially, no harm no foul. Meg Reilly, a Treasury spokeswoman, released a statement: "In the transaction at the heart of this dispute... the FRBNY made a loan of $25 billion which is on track to be paid back in full with interest so that taxpayers will be made whole. Somehow that fact that the government's loan is 'above water' gets lost in all the consternation despite its mention on page 2 of the SIG-TARP report (and weekly updates on the FRBNY's web site."

Let's put the disgusting disconnect aside and focus on the phrase "the government's loan is 'Above water'." The point of the quote is 'no harm no foul'. But is it an accurate statement and case of someone speaking before they have all the facts or is it an outright lie? The post - Stroll Down Maiden Lane Part 2 Maiden Lane II and III - will provide some background and context to the emails and above quote. In a nut shell, Maiden Lane III, a super-special investment vehicle, holds over $20 billion worth assets purchased from AIG counterparties. The most recent balance sheet information is here [pdf file]. Since, NY FED is the sole member of Maiden Lane III, the Fed is consolidating Maiden Lane III (the same for the rest of Maiden Lane entitie) balance sheet. The big multi- multi- billion dollar question is what is the value of these assets and hence the questionable nature of the Treasury spokesperson's statement? Janet Tavakoli started the questioning:

In the first place, that loan is not the heart of the dispute. Nonetheless, the FRBNY should immediately release the details of all of the Maiden Lane III assets backing that loan and show the current prices BlackRock has placed on them. Based on the current market, it is extremely likely that the loan is underwater. The assets backing the loan are so-called super senior and AAA rated collateralized debt obligations (CDOs). Similar CDOs trade for under ten cents on the dollar, not close to the average price of 35 cents for the loan's assets shown in a recent Fed report. The Fed claims prices climbed 4.5%. Yet in the secondary market, prices have dropped. The Fed awarded no-bid contracts to BlackRock to manage and price these assets (among other things). Given BlackRock's track record as a CDO manager*, I have no reason to believe its prices are reliable. As I mention above, I have reason to question the prices. If the Treasury wants to publicly claim the loan is not underwater, now is the time to prove it, even though this particular loan is not the key issue.

Then FT Alphaville makes this observation:

Now, a lot might have changed since September; Prices on some CDOs have improved as appetite for structured finance returned, but there remains a huge question mark over the fair value pricing being used by the Fed (via manager selected BlackRock). Note for instance, that the official, ratings on the Maiden Lane CDOs have been sliding steadily towards the non-investment grade bracket, yet their reported fair value improved between the end of September and the end of June: 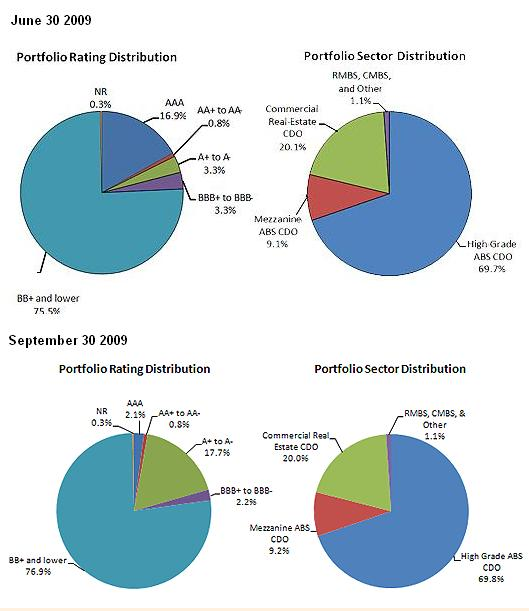 As FT Alphaville points out based on credit ratings distribution the claim of "above water" may be questionable but as Janet Tavakoli's post implies at very least a bluff or worst a lie.

What do you think?

IMO: Mr. Geithner is quickly becoming a major liability and having your spokesperson make statements like this is beyond irresponsible not only because of the lack of accuracy but because of the complete lack of sensibility to the economic situation the rest of us are facing.  "No harm no foul" - as Chris Bowers said yesterday - fuck you.

the issue of credibility and trust. Capitalism and markets depend on both to a large extent. When major players such as Fed and Treasury Department and the leaders of those players credibility and trust is seriously called into question it doesn't bode well for the rest of the system.

Can ya "stay on the case" on this? I have a sneaking feeling we're going to be seeing a lot more. Glad to see Chris Bowers writing about it as well. Open left is probably my favorite political blog.

“Secretary Geithner was not involved in any of these e- mails,” Gibbs said. “These decisions did not rise to his level at the Fed.”

I guess the buck doesn't stop with president of NY Fed. These were rogue employees of NY Fed. What, Geithner wasn't aware of what was happening? Give me a break. Here's the treasury spokeswoman again:

“Geithner played no role” in decisions regarding the New York Fed’s requests to withhold data.

So, he's claiming he was oblivious to this and it's just some "rogue" emailing back and forth with AIG?

I didn't catch the name on the email from the NY Fed, but I sincerely doubt something this big was being decided by some "throw under the bus" underlying.

I also believe Geithner role has been previously proved, even in past statements on the AIG payouts?

We're going to need a timeline on this one for I think we have our first scandal.

Of course no one will get fired or anything done until way late in the game.

Why am I getting the sneaking feeling there is a lot under the covers that will soon to be exposed?

"Economist Was Under Contract With HHS While Touting Health Reform Bill

MIT economist Jonathan Gruber, one of the leading academic defenders of health care reform, is taking heat for failing to disclose consistently that he was under contract with the Department of Health and Human Services while he was touting the Democrats' health proposals the media.

"I have never seen it disclosed that he was a paid consultant to the Obama administration," a blogger for Firedoglake wrote Friday morning. "For months I have been angry with Gruber because I thought he was simply an exaggerator whose dangerous love of the spotlight was hurting the efforts of progressives to make sure the Senate bill adopted more progressive cost control solutions. ... Now it is clear something much more sinister was at play."

I still remember the day I received my defining distaste for the previous admin. The Patriot Act had my hair in the air and then I found out about Blackwater. Still remember it.

There is so much coming at me now that I feel numb.

I feel like a feudal slave, a knave. I work, work, work to support more and more public funding. In California the defined benefit plan for public officials is unfunded to the tune of $3 trillion dollars. Its been 30 years since I last knew anyone in the private sector with a defined benefit plan. CALIPERS is in trouble but the taxpayer will bail them out.

Well, I think on EP there are a bunch of us who lean left, (full disclosure), who believe in mixed economies, government help and so on....

but I can really see why conservatives are like "small government" "no taxes" when public works or other programs are as corrupt as hell!

I mean the point of government is they are supposedly responsible to the national interest and to the citizens interests and when you get "big spenders" mixed with "corporate lobbyists" you get something I sure am not pleased with!

In terms of feeling like a serf, I hear ya on that one....citizens are looked at as "consumers" and something to wage arbitrage almost exclusively...

and media manipulation, Axelrod is a grand master of that one....so I'm not surprised to see they have "talking heads" out there spinning the machine.

Cable news has gotten so bad, I'm thinking of canceling cable myself because I don't watch it....

it's like chatter devoid of substance, 24/7 and that's when they bother to "cover" economics topics.

H/T to FireDogLake: Chairman Towns has scheduled a hearing on January 18 and has invited Mr. Geithner to testify about AIG email/Bailout of Goldman Sachs scandal.

He didn't have much choice since ranking repuglican member Issa asked for and obtained the emails.

It's about time. Are Democrats finally getting it? No matter how much money Wall Street gives them they still have to be re-elected by constituents who are fed up with Wall Street.

Ahh, wishful thinking on my part. Move along - nothing to see here.

I put this in an Instapopulist and also Fed is fighting the FOIA pursued by Bloomberg to find out who got the $2 trillion in loans.

Then, there is a new poll on whether Geithner should be fired.

I also think one of the real problems is nothing, zero, nada, no consequences are happening to these banks...

so even if one fires Geithner, odds are they will get yet another lackey who does whatever they want.