A flurry of studies have been released telling us what we already know. America is not the land of opportunity for most folk.

Social mobility is the ability to rise or fall economically in relation to one's peers. Increased social mobility implies people get ahead by their own efforts.

There are two forms of mobility, absolute mobility and relative. Absolute mobility asks do you have more money than your parents in comparable dollars. Relative mobility is the ability to move out of poverty and to the middle class or conversely, from a life of privilege and into the middle class. Relative mobility means if one is raised in poverty, with dysfunctional parents or even with a silver spoon, what are the odds that person will be in similar economic circumstances as an adult.

The Pew Charitable Trust discovered unfortunately in America, more and more destinies are determined by birth.

From the Pew Economic Mobility Project, here is the meat of their findings.

Regardless of family structure and race, our study suggests a considerable amount of absolute mobility in the United States. Approximately four out of five children have higher total family incomes than their parents, once income is adjusted for family size, with there being greater levels of absolute mobility among lower-income children.

However, African American children who grew up in the bottom or middle of the parental income distribution are much less likely than white children to have greater economic success than their parents.

The New York Times overviewed five different studies all showing the same thing, pulling yourself up through hard work and opportunity in America is disappearing.

At least five large studies in recent years have found the United States to be less mobile than comparable nations. A project led by Markus Jantti, an economist at a Swedish university, found that 42 percent of American men raised in the bottom fifth of incomes stay there as adults. That shows a level of persistent disadvantage much higher than in Denmark (25 percent) and Britain (30 percent) — a country famous for its class constraints.

Despite frequent references to the United States as a classless society, about 62 percent of Americans (male and female) raised in the top fifth of incomes stay in the top two-fifths, according to research by the Economic Mobility Project of the Pew Charitable Trusts. Similarly, 65 percent born in the bottom fifth stay in the bottom two-fifths.

Pew also found one third of kids born into the middle class from the 1960's just fell down the economic ladder as adults. 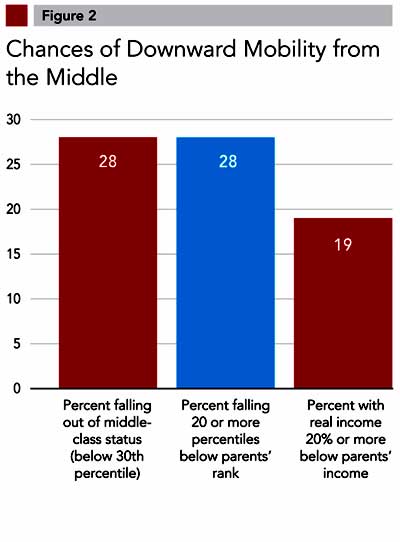 More shock and awe, the study statistics and data are from before this recession.

Pew looked at children born in the early- to mid-1960s and assessed their economic status roughly 40 years later.

The middle class is defined as those between the 30th and 70th income percentile.

Marital status and educational attainment had a great bearing on whether people were able to remain in the middle class, Pew found. Race and gender were also factors.

Those who are divorced, widowed or separated are more likely to fall out of the middle class, particularly if they are women. And Americans who don't attend college are also more likely to slip.

Below is the Pew Charitable Trust chart of what income levels define the classes. See if you're dropped off the social mobility ladder. 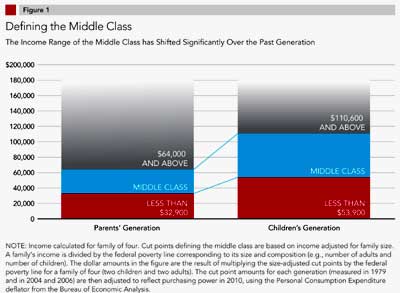 We all know college can help one stay alive financially, or that is the continual drum beat. Pew also found a scary consequence of the housing bust. It seems many families were using home equity loans to pay for college. That of course has dried up.

Pew has an entire website, Economic Mobility, devoted to publishing their reports, facts and figures.

great article. I'm just confused on the first chart. How three different classes black, red and grey add up to 100%? They are stacked up by the bottom, middle and top third. Is it a pure coincidence or a diagram made to belive?

So, taking column one, you see the children of people in the bottom 3rd income brackets, the black, stayed in that income bracket as adults or 53%.

That's column one and you apply the same thing to column two and three.

Hope that helps. You might also click on any of the links and read the Pew actual report, they have many graphs and more information. This site has a tendency not to focus on demographics, but some of the information is truly depressing. i.e. what the hell is going on with black men and having babies out of wedlock. Poverty I suspect but the stats are not good.