It seems Ireland is basically insolvent. All hail the banks.

WHEN I wrote in The Irish Times last May showing how the bank guarantee would lead to national insolvency, I did not expect the financial collapse to be anywhere near as swift or as deep as has now occurred. During September, the Irish Republic quietly ceased to exist as an autonomous fiscal entity, and became a ward of the European Central Bank.

Morgan Kelly is an Irish Economist who is predicting an 80% drop in Ireland home prices. He estimates their own bank bail out is sinking their nation:

This €70 billion bill for the banks dwarfs the €15 billion in spending cuts now agonised over, and reduces the necessary cuts in Government spending to an exercise in futility. What is the point of rearranging the spending deckchairs, when the iceberg of bank losses is going to sink us anyway?

What is driving our bond yields to record levels is not the Government deficit, but the bank bailout. Without the banks, our national debt could be stabilised in four years at a level not much worse than where France, with its triple A rating in the bond markets, is now. 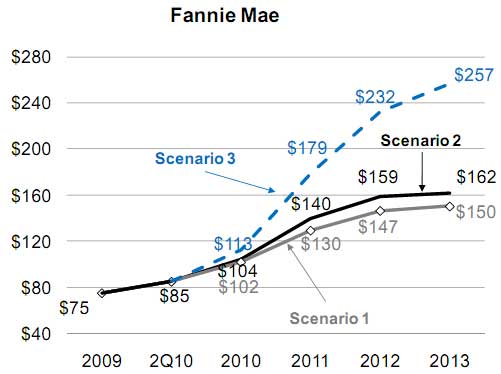 Senator Chuck Grassley has received documentation from Goldman Sachs showing the top recipients of AIG money. The grand total is $4.3 billion. Below are the recipients and their amounts. As you can see, they are all foreign entities. In other words, U.S. taxpayer money, used to bail out AIG which in turn was used to pay off Goldman Sachs went straight out of the country and into foreign banks.

The U.K. Telegraph is reporting some horrifying news that behind closed doors the Federal Reserve is considering purchasing more toxic assets. A lot more. To bring the total from $2.4 trillion to $5 trillion dollars.

Believe this or not, Fannie Mae and Freddie Mac could cost up to $1 trillion dollars to fix.

According to a study by a Swiss rating agency, Independent Credit View, the global banking system is particularly undercapitalized, to the tune of $1.5 trillion dollars. 58 banks where compared for Q4 2009 capital on hand to needs in Q4 2011 and Bloomberg got their hands on it. Look at these two percentages of Irish banks:

The special inspector general for the government's bailout program said he would probe whether securities sold by Goldman Sachs Group Inc (GS.N) led to losses at AIG and if the American taxpayer was a victim of fraud.

Barofsky said he is in touch with the SEC and will possibly coordinate with the Department of Justice "to see if there are cases of fraud and if AIG and as a result, the American taxpayers, were victims of similar types of fraud."

Barofsky made the comments in response to questions from the ranking Republican on the Senate Finance Committee, Charles Grassley, at a hearing examining the TARP.

Looks like we might be seeing some movement to stop Too Big to Fail for real, or we might just see some politickin' instead. Bloomberg is reporting:

Senate Democrats likely will scrap a proposal for a $50 billion fund to wind down big failing companies in an effort to draw Republican support for financial- overhaul legislation being considered later this week.

Senators Susan Collins and Olympia Snowe, both Maine Republicans who are seen as potential supporters of the bill, told reporters yesterday they oppose the fund. Treasury Secretary Timothy Geithner told Collins that the Obama administration also is lukewarm to the idea.

General Motors Co., steadily returning to health after its near-collapse in 2009, said Tuesday it plans to pay off its government loans by June — five years ahead of schedule — and could report a profit as early as this year.

Remember all of the controversy and blasting of the U.S. auto industry?

Here is the past and current financial situation. GM may report a profit this quarter.

The Huffington Post is reporting there is a potential smoking gun on Bernanke.

Bernanke overruled his staff advising him to not bail out AIG.

A Republican senator said Tuesday that documents showing Federal Reserve Board Chairman Ben Bernake covered up the fact that his staff recommended he not bailout AIG are being kept from the public. And a House Republican charged that a whistleblower had alerted Congress to specific documents provide "troubling details" of Bernanke's role in the AIG bailout.

Below is the CNBC interview with Sen. Bunning (R-KY):