While those people are out of luck, unless Congress passes what's called tier 5, extending the benefit time period, we now have even more people about to be denied unemployment benefits on top of things. That's 2 million people about to have zero money to try to survive.

Unemployment insurance normally extends 27 weeks. Congress extended unemployment to 99 weeks in the Stimulus package. Filing for that extension expires in the week of November 20th, 2010. Below is a graph of those on EUC and EB from the Atlanta Federal Reserve, from September 2010. 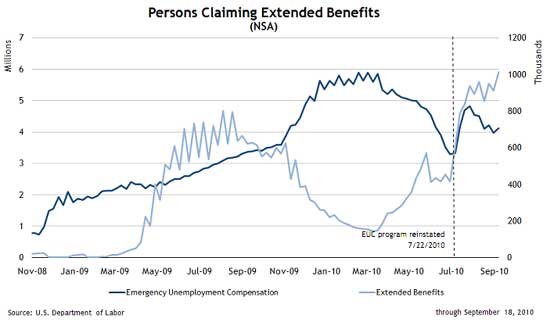 About 2 million long-term jobless workers could lose eligibility for unemployment-insurance payments by the end of the year due to the expiration of federal funding.

A special extended-benefits program that relies on federal funds will start shutting down later this month. There’s little time to work on legislation to extend the program during the lame-duck session in Congress, and passage of additional benefits would likely be even tougher once Republicans assume majority status in the House of Representatives starting in January.

EPI tells us at the current rate of job growth, U.S. full employment is 20 years away.

According to the latest weekly initial claims report, there were 3,978,374 people claiming emergency unemployment compensation and 1,034,703 claiming extended benefits. That's over 5 million people. 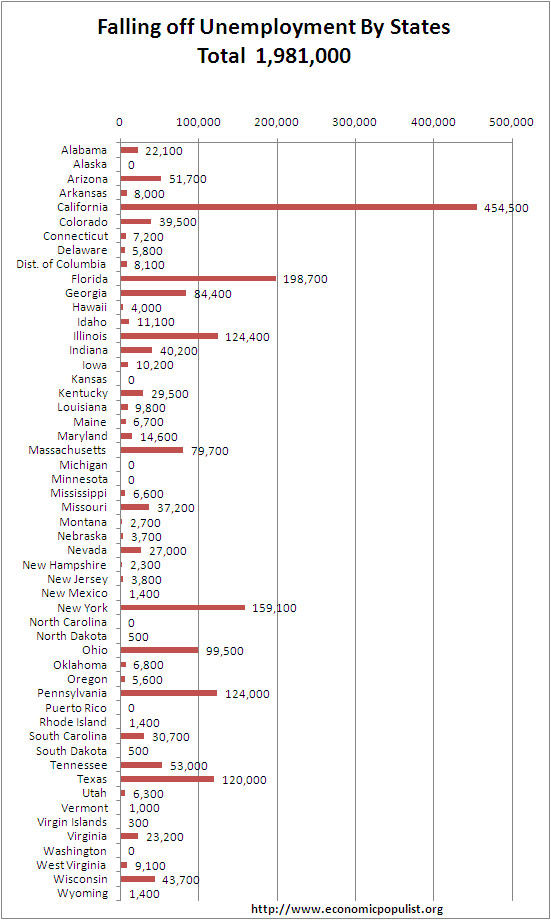 That....is a national emergency. Now we are seeing the consequences of job loss and high unemployment and it will only get worse. When you've got 16% of your population earning $5000 dollars or less and this many people unable to land a job....expect to see 3rd world poverty right here in America on a massive scale. That's no shelter, no clothing, no food and assuredly no medical care for a huge percentage of Americans, especially those without small children, since they are denied a roof over their heads by welfare reform.

Here are some damning facts for you. The broader unemployment rate, or those unemployed and underemployed is 26.6 million people. There are 4.6 available workers per job opening. This recession lost 7.5 million jobs. Due to population growth, we need 11 million jobs to get back to 2007 unemployment rates of around 5%.

How does the BLS count the unemployed anyway? Well, it's a tricky wicket. From their methods handbook, first there are two surveys, the establishment survey, which is 140,000 businesses and the Current Population Survey, which is a sampling of 60,000 households, with a probability/statistical extrapolation to the entire nation from that sample. Yes, strange but true, the BLS is not simply collecting raw data, yet you can bet Visa, Facebook, MasterCard and Google are.

People first go to the EUC and then to EB before being dumped off in the damned land. Remember, for those self-employed, there was never any assistance. There are only food stamps. Only about 48% of working America counts to qualify for unemployment benefits in the first place. EPI is estimating extending EUC and EB unemployment benefits will cost $65 billion dollars. They have a host of other claims, which are based on CBO economic stimulus multipliers.

I could not find who created that painting, logo, image of the 99ers with the running on empty marker. I like to credit people's work but unfortunately this image is all over the web, with no citation on who created it. If anyone can find the artist, I'd add the citation to this post.

Please get this article out into the USA today, the Washington Post,the New York post. the Los Angeles times. AMerican needs this information. I have 5 weeks of Benefits left. Payed into the system with out using it for 40 years, now they are going to kick me out. Damn Congress

Of course we don't write for the New Times, Washington Post or CNN. That said, if you want a story from this site hitting or influencing the press headlines, here's what you do:

1. use the share buttons and submit to reddit, digg, buzzflash
2. Share it on facebook
3. email it to your friends
4. post a link to it on other sites, large sites in the comments sections
For example, want CBS Market Watch to talk turkey on the long term unemployed? Post a link to this piece in their comment section covering the unemployment reports and ask how come THEY are not writing about this? Post a link to this piece in the Wall Street Journal comments on unemployment, labor articles and ask how come this isn't on THEIR font page? You can do that with the Huffington Post, any major press where it fits their own stories and ask. You can also email them and say how come they are not covering this story?
5. Use community blogs of your political flavor to link to this piece in the comments
6. post a tweet
7. get a huge public figure with a lot of followers to tweet and link to it

All of above makes a post "go viral" and subvert the main stream media "messaging"...

Demand a better Press corps and you can do it by posting a link, the URL referencing this post. They may not publish the link, instead rewrite "their own", but believe me, the press is on the look out for popular stories too....so the above is how you make this story popular.

If you notice we get "messaging" every damn day. The latest is some stupid cruise ship with a burnt out engine. WHO CARES! No one! This is your classic "non-story story" that the press picks to promote and flood the headlines with instead of real news, happens every day.

Why we are here. We're a 24/7 all things $$ economics Populist site, writing about issues, statistics we CARE about as general folks from that vastly ignored wasteland called the U.S. middle class.

Trust me, not only do reporters read this site, more than once I've seen comments or points made on this site magically appears, uncredited in press articles (hey thanks journalists, could you consider giving some credit and a link?)

So, even though we're not being given our due, in terms of your goal, which is to get this out into the main stream media, the above really can work.

You have the power to influence the main stream media dialog these days with social networking technologies.

Damn! listen to the whining. I worked almost my entire life in the shadows never qualifying for any of these goverment benefits. Have any of you begun to think maybe you've been sold a bill of goods and a pack of lies?

All this stems from Free Trade and Globalization combined with corrupt politicians. Well duh! Maybe that free trade isn't so free after all. I heard Ross Perot's Giant Sucking Sound loud and clear? Did you? And your government is simply trying to keep you bleating sheep calm and not go out and riot or try to change the status quo.

Shut up! Figure out how to survive and then go do it. I did because I had to. And you CAN do something about the Republicrats and Demopublicans. Get rid of the liars and thieves.

I appreciate all your efforts putting this information together, but your graph seems a little out of step. How can there be more people about to lose benefits in Wyoming than in NJ. Is there a chance that graph could be tightened up to reflect the true nature of each state?

Thanks again for efforts to keep the unemployed in your excellent economic postings.

Sorry about that, I didn't realize the graph was so unclear. I redid it to show every state and also put the BLS estimates by the bars in the graph.

You are right, Wyoming is ony 1400, it's just the graph wasn't clear to read.

I appreciate all your efforts putting this information together, but your graph seems a little out of step. How can there be more people about to lose benefits in Wyoming than in NJ. Is there a chance that graph could be tightened up to reflect the true nature of each state?

Thanks again for efforts to keep the unemployed in your excellent economic postings.

That data is not available by the BLS and i went off of one data point they gave. A private "for pay" data tracking firm has the numbers but I don't have a subscription, i.e. spendy for large think tanks, gov. agencies.