When a boat you are on is leaking you either start bailing out the water or 'abandon ship'. Right? Well guess what our boat is continuing to leak. Census Bureau announced today that our Trade Deficit grew in November to $36.4 billion:

Emphasis is NOT mine!

Believe it or not there was a time when we didn't have such a large Trade Deficit: 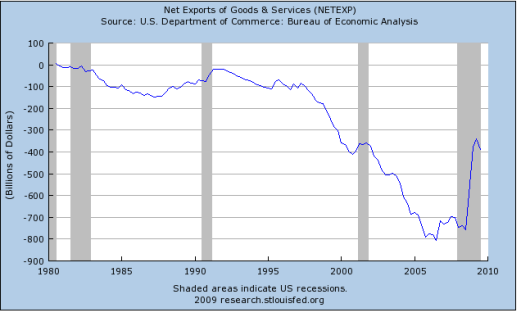 But it certainly wasn't recent history.

BTW, we are running a $20.2 billion Trade Deficit (goods) with China.  The largest deficit.

Remember when we were told by [neo-liberal] economists that trade deficits didn't matter.  Ha.  If we are going to continue to calculate GDP as

When Imports are greater than Exports then we got a problem.  It's simple arithmetic.  But this problem or LEAKAGE is made worse when consumer spending (70% of GDP) will not return to past glory.  So, yeah Trade Deficits do matter and it's causing our boat to leak.

So, are we going to bail on this neo-liberal trade policy or what?

of a blow out December possibly.

I saw an article with the usual headline "those jobs are not coming back" and then an almost "get over it" as if there is nothing the United States can do.

This is B.S., they could do something about it by reforming these bad trade deals.