Economist Michael Hudson by way of Naked Capitalism points out social security has it's own funds source.

You know that the debt kerfuffle is as staged as melodramatically as a World Wrestling Federation exhibition when Mr. Obama makes the blatantly empty threat that if Congress does not “tackle the tough challenges of entitlement and tax reform,” there won’t be money to pay Social Security checks next month. In his debt speech last night (July 25), he threatened that if “we default, we would not have enough money to pay all of our bills – bills that include monthly Social Security checks, veterans’ benefits, and the government contracts we’ve signed with thousands of businesses.

This is not remotely true. But it has become the scare theme for over a week now, ever since the President used almost the same words in his interview with CBS Evening News anchor Scott Pelley.

Of course the government will have enough money to pay the monthly Social Security checks. The Social Security administration has its own savings – in Treasury bills. I realize that lawyers (such as Mr. Obama and indeed most American presidents) rarely understand economics. But this is a legal issue. Mr. Obama certainly must know that Social Security is solvent, with liquid securities to pay for many decades to come. Yet Mr. Obama has put Social Security at the very top of his hit list!

Paul Krugman points out it's good at least for Medicare there is a stalemate:

Specifically, according to many reports, the president offered both means-testing of Medicare benefits and a rise in the age of Medicare eligibility. The first would be bad policy; the second would be terrible policy. And it would almost surely be terrible politics, too.

The crucial thing to remember, when we talk about Medicare, is that our goal isn’t, or at least shouldn’t be, defined in terms of some arbitrary number. Our goal should be, instead, to give Americans the health care they need at a price the country can afford. And throwing Americans in their mid-60s off Medicare moves us away from that goal, not toward it.

Krugman also blasts the absolutely inane press, who try to claim this extremism, also coming from Obama is centrist or partisan. Not on your life, this is the war between the crazies and the slightly less crazies, all agendas that will crucify the U.S. economy.

Econbrowser amplifies the causes of the debt, with war and the Bush tax cuts coming out on top. Not that it matters, facts, reality do not enter into this hostage taking psychodrama being played out in prime time. 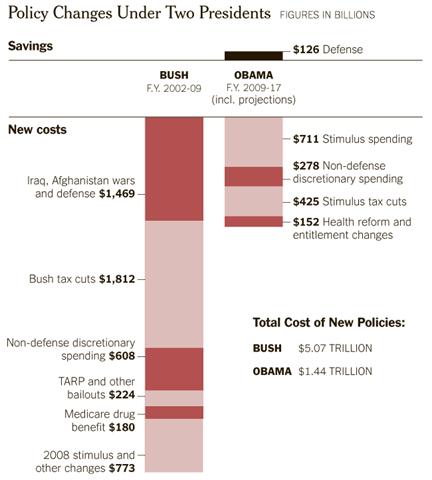 As far as 2021 is concerned, the solution seems pretty simple. Let the tax cuts expire at the end of 2021. Assuming that we do patch the AMT, killing the tax cuts is worth $444 billion in 2021, or 1.9 percent of GDP. That would cover almost two-thirds of the total deficit.

Of course now 9 out of 10 Economists say the United States credit rating will be downgraded and this warning is repeated like a mantra of the Flagellants.

What do the American people think? No surprise there, new polls are pouring in with the message of doom, A Pox on Both Houses.

Anyone with a little mathematical skill, seemingly devoid in Congress, can balance the budget in 5 minutes by rolling back the Bush tax cuts and other modifications. No cuts to Social Security or Medicare involved. Deal with the trade deficit and flash trading on Wall Street, Kaboom, one gets a surplus in no time.

So how crazy are the Tea Party Republicans? It's so bad, they won't even pass House Speaker Boehner's plan.

What frightens this writer the most is thinking through history. During the last great economic crisis, the Great Depression, the United States got FDR, while Germany got Hitler. It seems the disgust with the Wall Street and Bank Bail Outs, plus corporate lobbyist generated Health care reform and a Stimulus that did not require employers to hire American or Buy American had great blow back. Unfortunately that blow back is taking America into the fire from the frying pan.

Either way, having representation that represents the national interest seems impossible and now, having a government that isn't a global joke seems to have gone the way of the American Dream.