The Congressional Oversight Committee released a report on AIG last week. But before we get into those damning facts, check out the below video clip of Elizabeth Warren trying to confront Timothy Geithner on the failure of HAMP. Notice how 1 million people losing their homes goes in one ear and out the other as Treasury Secretary Geithner rambles on in response.

This clip is from a COP hearing with Timothy Geithner this past week.

He was asked a host of questions, including on HAMP. Geithner just goes on and on at how successful TARP was. Frankly it is a surprise how much has been repaid but the reality is TARP is a small part of the total bail out. Last tally the Federal Reserve has $6.4 trillion dollars in bail out related activities on their books.

While the COP AIG report is damning, what is more amazing is how such a report literally goes unnoticed in the public sphere. I happened to check the site and that's how I found it.

Here are the main points reached, from the executive summary.

Amazing isn't it? We just got financial reform that will not stop the next AIG. This is an outrage yet our representatives almost yawn at this point. The below graph breaks down how much the taxpayer is still on the hook for, just with AIG. 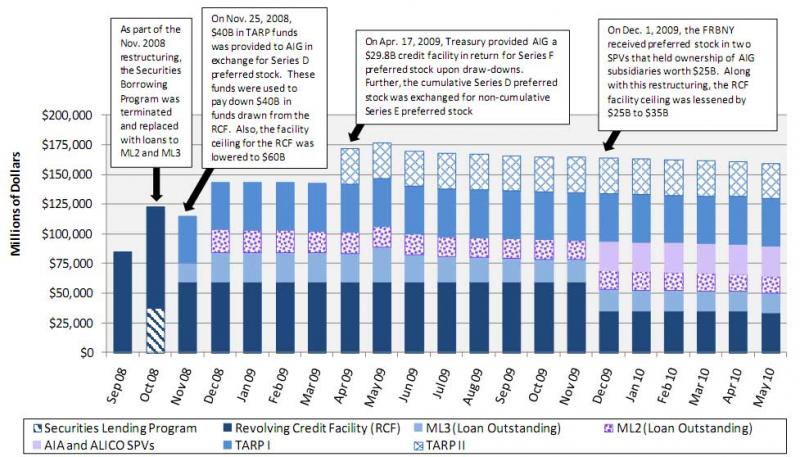 Below is Elizabeth Warren's video overview on the COP AIG report.

Below is a Bloomberg interview with Elizabeth Warren. One of the things she mentions is the impending commercial real estate implosion.

Joseph Cassano, the man behind AIG FP, or the notorious derivatives and credit default swaps division, will testify before the crisis committee. Big deal. A public scolding is no substitute for real reform or criminal charges.