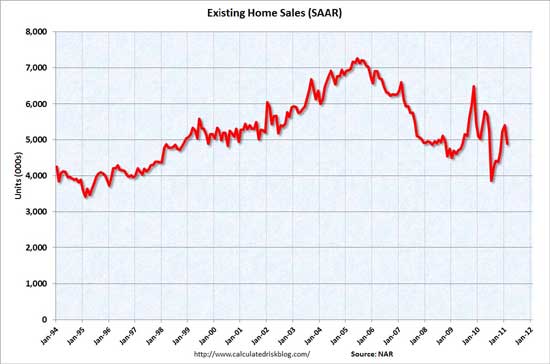 Existing-home sales, which are completed transactions that include single-family, townhomes, condominiums and co-ops, dropped 9.6 percent to a seasonally adjusted annual rate of 4.88 million in February from an upwardly revised 5.40 million in January, and are 2.8 percent below the 5.02 million pace in February 2010.

All cash sales, which implies investors, not families are buying the homes, hit a record at 33% of all existing home purchases.

Distressed homes – sold at discount – accounted for a 39 percent market share in February, up from 37 percent in January and 35 percent in February 2010.

This means people are picking up foreclosures at bargain prices.

Housing inventory also increased an 8.6 month supply, but is down 1.2% from last year.

Total housing inventory at the end of February rose 3.5 percent to 3.49 million existing homes available for sale, which represents an 8.6-month supply at the current sales pace, up from a 7.5-month supply in January.

The graph was courtesy of Calculated Risk, where they are more graphs of NAR data.

House Progressives Introduce Their Own Bail Out Bill - 18653 reads
Friday Movie Night - The Meltdown of the House of Cards Edition - 80896 reads
Rejecting a Job Applicant based on their Credit Score - Discrimination? - 57108 reads
Safeway Skewered for Throwing 6,000 Workers Under the Bus in Video Parody - 342699 reads
We Are So Screwed - 15960 reads
Mortgage Deal Under Discussion - Obama Administration and Big Banks - 178602 reads
Choreographed Budget Cave In - The Money Party Stabs Citizens in the Back - 13693 reads
March global oil surplus at 17.7 million barrels per day; 2nd qtr surplus to be at 6.2 million bpd despite OPEC-led cuts - 5982 reads
Preying on the Injured as Public Policy - 13287 reads
GOP Spews Economic Fiction Again - 7436 reads