Conservatives have been well known for bad-mouthing our European ancestors — especially the French 1 — calling them "socialists" and whatever other insults they can think of to hurl at them 2. Although, "socialist" isn't even an insult, but a political terminology that's used as a scare tactic by the Republicans to invoke irrational fear — equating Socialism to Stalinism and genocide (playing on their base's ignorance).

But at the same time, the GOP has also been telling us how we should admire our job creators, that we should praise capitalism, and that we should trust and unequivocally believe in free markets.

The Republicans believe that American workers should be overwhelmingly grateful and thankful for our job creators — that we should admire and respect them more. The GOP also believes that we should tax them far less (maybe as a reward for offshoring so many jobs overseas), saying that this will grow our economy — and that if we can enable the CEOs to give themselves bigger paychecks (with more tax cuts and other loopholes in the tax code), this will somehow "trickle-down" to the rest of us — and that more "incentives" will also discourage them from sending more jobs to China, Vietnam and Cambodia.

Earlier this year in the New York Times, Paul Krugman noted in a post about France ("Cheese-eating Job Creators") that things are different now from the old days of "Eurotrashing" — and he points to an older study from the Center for Economic Policy and Research (CEPR) as one reason why this attitude is out-of-date: Old Europe Goes To Work: Rising Employment Rates in the European Union (It was written in 2006 by John Schmitt and Dean Baker):

"This report shows that Europe’s welfare states have nearly closed the employment gap with respect to the United States for workers aged 25 to 54 years old."

Then Krugman presents a chart from the St. Louis Federal Reserve (below) and writes:

"Since the late 1990s we have completely traded places: Prime-age French adults are now much more likely than their US counterparts to have jobs. Strange how amid the incessant bad-mouthing of French performance this fact never gets mentioned." (* In April 2000 the labor force participation rate in the U.S. began its long decline, long before Baby Boomers began retiring, but not long after Bill Clinton made offshoring much easier for our esteemed job creators.) 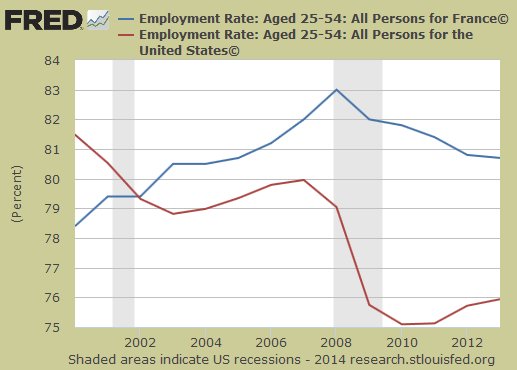 Now fast forward 8 years later after that CEPR study. In a more recent post in August 2014 by Paul Krugman, "What’s The Matter With France?" he writes:

"France has low labor force participation by the relatively old, thanks to generous retirement programs, and by the young, partly because generous aid means that few need to work while in school, partly perhaps because a high minimum wage and other factors discourage youth employment [France pays a minimum wage of $12.35 an hour]. What about prime-age workers?"

And again, he presents the same chart (above), and then continues:

"It’s a good thing we know that France is the country in crisis, isn’t it? Because otherwise you might get confused by employment performance that looks much better than ours ... What’s going on here politically? Simon Wren-Lewis makes a very good point. In America, many of the people who shape economic discourse are forever living in the 1970s, when stagflation was the order of the day."

While France may or may not be more "exceptional" than America (although, our wines are getting much better), the French government certainly deserves a lot more respect for how they treat their workers — much more so than our own greedy job creators*. And during their Revolution, the French patriots certainly had a very unique way of dealing with their own oligarchs and plutocrats.

* Greed may only be natural human behavior, but it's our elected representatives in Congress who enables such behavior. If Vermont's Senator Bernie Sanders is a "socialist", then maybe our country should be more like France. From VOX ➡ Bernie Sanders vs. the Billionaires: Why Vermont’s Socialist Senator may run for President 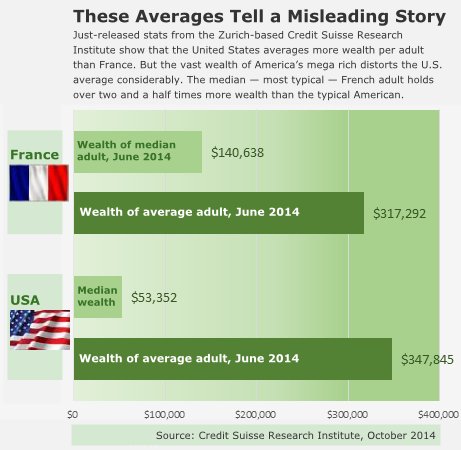 We throw cows at you you silly English! Oh those French, maybe a wooden rabbit taken into their castle will work. (Monty Python and the Holy Grail).

It is absurd they go out about "Oh those socialists", when France has a way higher quality of life than here, job security, health care, never mind awesome food.

I totally agree with what you say. Even Canada has better standards than the US

How does one immigrate from the US to Canada? I read that Toronto is one of the best cities to live. I assume it much easier to migrate from Canada to the US. Even moving to Mexico from the US is difficult. One has to have a minimum monthly income and "x" amount of dollars to retire there; and I'm sure that, to find a job, would be even more difficult for an American who wishes to relate to Mexico or Canada.

I don't know the full answer, but I found this when I was thinking about the same thing.

At the bottom is a questionnaire to help