JOLTS stands for Job Openings and Labor Turnover Survey. The June 2011 statistics show there were 4.53 official unemployed people hunting for a job to every position available. There were only 3,109,000 job openings for June 2011, almost the same, +2.47%, from the previous month of 3,034,000. The change is flat from last month, an absolutely horrific jobs market. Below is the graph of number of official unemployed, 14.09 million, per job opening for June 2011. 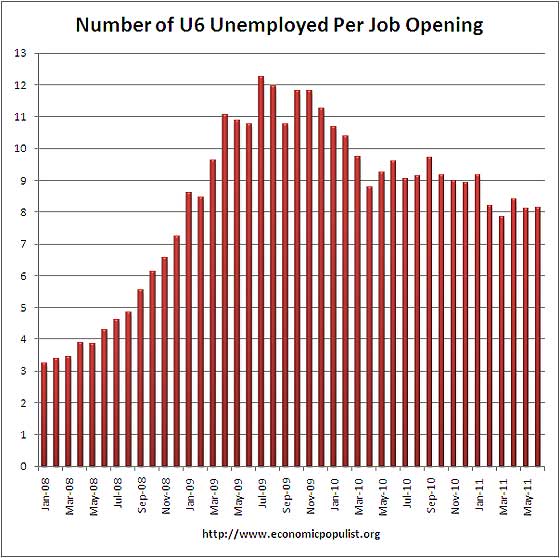 Below are raw job openings, way below pre-recession levels. Believe this or not, one month past the so called end of the Great Recession, July 2009, job openings have only increased 997,000. That's pathetic. Below are total job separations, 4,016,000, which is a monthly decrease of -129,000 or -3.11%. The term separation means you're out of a job through a layoff, quitting or retirement. Notice how separations is almost equal to the number of hires, 4,051,000. Take this as a symptom of the disposable worker syndrome. The number of quits or voluntary job separations are still dangerously close to the number of fires, although improved from November 2010. Want a choice of employers? Doesn't seem to be much of an option today. Quits were 48% of the total separations whereas layoffs and fires were 45% in May.

Below are quits minus discharges and layoffs. When quits comes close to firings that means people have little choice in employment. You want to see choice, or quits, rise and be much higher than firings. The below graph shows people still do not have many options when it comes to a job. The BLS was kind enough to make a credible Beveridge Curve graph, reprinted below. The Beveridge curve shows the official unemployment rate vs. the job openings rate, over time. If you see a bunch of data points to the far right, that's bad, it means there is long term unemployment and not enough jobs. Look at how we're stuck to the right and moving right. June 2011 is further to the right than May 2011. The green, representing the 2009 time period, shows how fast we went to the right and the purple, which is 2010, 2011, means we are stuck there. This means there are no jobs! This graph shows working America is in big trouble and considering how the June unemployment report is much worse, don't expect things to get better. 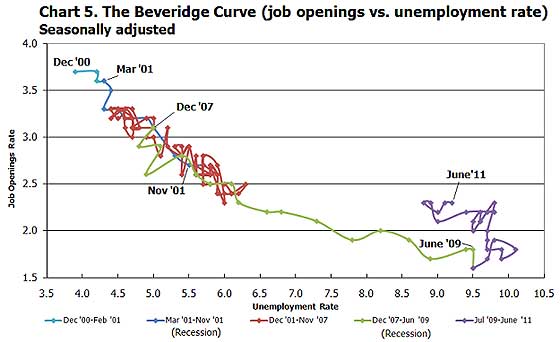 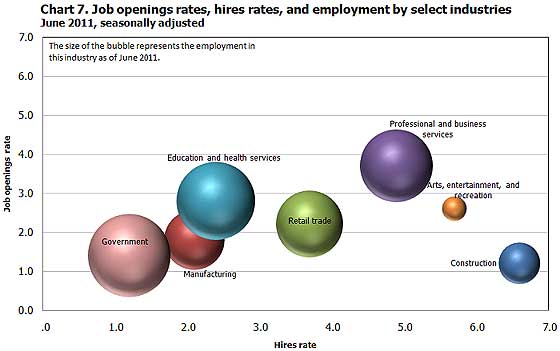 Also, bear in mind professional and technical services is notorious to import workers on foreign guest worker Visas, displacing Americans. Employers also quite often put out fictional job openings, demanding perfect skill matches to the point no one on the globe has that experience.

To put these ratios into perspective, there were 4.8 million job openings in March 2007 and believe this or not, the low point of job openings was in July 2009.

, and also not seasonally adjusted. The above graph was created by applying this formula:

House Progressives Introduce Their Own Bail Out Bill - 18661 reads
March global oil surplus at 17.7 million barrels per day; 2nd qtr surplus to be at 6.2 million bpd despite OPEC-led cuts - 6033 reads
Safeway Skewered for Throwing 6,000 Workers Under the Bus in Video Parody - 342744 reads
Friday Movie Night - The Meltdown of the House of Cards Edition - 80907 reads
Rejecting a Job Applicant based on their Credit Score - Discrimination? - 57122 reads
How Many Jobs Are Needed to Keep Up with Population Growth? - 250298 reads
Mortgage Deal Under Discussion - Obama Administration and Big Banks - 178613 reads
We Are So Screwed - 15969 reads
Choreographed Budget Cave In - The Money Party Stabs Citizens in the Back - 13702 reads
The Cost of Left-Wing hate - 124458 reads