Venture capitalist Nick Hanauer was the first outside investor in Amazon.com (which went online in 1995) — and one reason why Amazon is currently located in Hanauer's hometown of Seattle, Washington.

He was also the founder and chairman of Aquantive Inc., which was sold to Microsoft in 2007 for $6.4 billion in cash. Some of his other investments included Insitu Group (purchased by Boeing for $400 million) and Market Leader (purchased by Trulia in 2013 for $350 million).

Needless to say, Nick Hanauer is a very wealthy man and a part of the top 0.01%. But even though he is very rich, he's much different than the plutocrats that dominate America today.

Most of America's mega-wealthy oligarchs (who dodge billions of dollars in taxes, offshore millions of good-paying jobs and hoard trillions of dollars in profits in offshore banks) have hired journalists and economists to make their case that they can't afford to pay higher taxes or offer higher wages to their employees. But of course, one wouldn't know that judging by how they paid themselves.

These ultra-high net worth individuals also give political candidates millions of dollars to make sure that their taxes don't go up — but instead, try to cut them even more. And some of these rich social psychopaths also want to eliminate the federal minimum wage altogether. Not to mention, weaken labor and worker safety laws, skirt environmental regulations and ban labor unions. The more radical among them would also eliminate the IRS (maybe to escape from being audited).

But Nick Hanauer is much different. And unlike many of these other multi-billionaires, he doesn't consider himself a "job creator" per se. He reasons that if no one can afford to buy what he's selling, then the jobs his companies create will disappear. In his view, what the nation needs now is more money in the hands of regular consumers and more infrastructure investment. That's why he advocates for raising taxes on the super-rich and hiking the minimum wage.

He also thinks that American corporations should stop manipulating their stock prices just to further enrich the top 0.01% (as though they weren't already rich enough).

In a recent interview at Bloomberg, Nick Hanauer notes (4:10 into the 7:23 video) that in 1982 Ronald Reagan put a Wall Street CEO in charge of the SEC who changed the rule that allowed publicly traded companies to buy back their outstanding shares of company stock. Before that, it was considered "stock manipulation" — and illegal.

That SEC rule change coincided with stock-based compensation for company executives, when the single-minded goal was pumping up stock prices. These execs would write pay packages for themselves (almost everyone on the board of directors) that included stock-options grants — and then followed this up with large stock buy-backs.

Nick Hanauer said to help solve this, the rule should be changed to give incentives to companies to reinvest in R&D, employees and company expansions — rather than just incentivize companies to enrich their biggest share holders — such as company execs and institutional shareholders. (But as Rolling Stone pointed out in 2013, when Obama appointed Mary Jo White to be the director of the SEC, it was like putting the fox in the hen house).

This, from an excellent article at the Roosevelt Institute about stock buybacks:

* SEC Chairman John Shad, who had previously been a top executive at the Wall Street investment bank E. F. Hutton, was an advocate of the rule change. He argued that large-scale open market purchases would fuel an increase in stock prices that would be beneficial to shareholders. [John Shad died in 1994. His bio is at the New York Times.]

* Under the Securities Exchange Act of 1934, large-scale stock repurchases can be construed as an attempt to manipulate a company's stock price. In November 1982, however, SEC Rule 10b-18 changed all that. The new rule provided companies with a safe harbor that assured them that manipulation charges would not be filed if each day's open-market repurchases were not greater than 25% of the stock's average daily trading volume for the previous four weeks and if the company refrained from doing buybacks at the beginning and end of the trading day."

* Section 10(b) is codified at 15 U.S.C. § 78j(b) — Rule 10b-5 has been employed to cover insider trading cases, but has also been used against companies for price fixing — artificially inflating or depressing stock prices through stock manipulation.

In his interview at Bloomberg (video below) Nick Hanauer explains why wages need to be higher: to drive consumer demand, to drive U.S. economic growth, to drive American companies to expand their businesses — rather than just artificially pumping up their stock prices by buying back company shares.

As NoBillionaires.Com noted, Nick Hanauer had also previously made a valid point during a TED talk when explaining why rich people aren’t really the true "job creators":

“There can never be enough super-rich Americans to power a great economy. The annual earnings of people like me are hundreds, if not thousands, of times greater than those of the median American — but we don't buy hundreds or thousands of times more stuff.” (Video and full text of speech here.)

"But by far the biggest threat to middle-class workers — and to our economy as a whole — comes from the changing nature of employment itself. Gone is the era of the lifetime career, let alone the lifelong job and the economic security that came with it, having been replaced by a new economy intent on recasting full-time employees into contractors, vendors, and temporary workers. It is an economic transformation that promises new efficiencies and greater flexibility for “employers” and “employees” alike, but which threatens to undermine the very foundation upon which middle-class America was built. And if the American middle-class crumbles, so will an American economy that relies on consumer spending for 70 percent of its activity." (Check out the reader comments at Mark Thoma's blog)

The Atlanta Fed's most recent outlook: "The elevated share [of part-time workers] is concentrated among people who would prefer to be working full-time." Their main reasons were: 1) The relative cost of full-time employees. 2) Lack of strong enough sales growth to justify conversion of part-time workers to full-time workers. [Editor's Note: In case you missed that, "sales growth" = extra money in people's pockets to spend. That's what Nick Hanauer has been saying.]

Employers' predictions for part-time employment at their firms:

The Atlanta Fed concludes (without the links):

"Low sales growth and an ample supply of workers willing to take part-time jobs could both be viewed as cyclical factors that will dissipate as the economy further improves. Meanwhile, higher compensation costs of full-time relative to part-time employees and the role of technology that enables companies to more easily manage their workforce can be considered structural factors influencing the behavior of firms. Firms that currently have a higher share of part-time employees gave about equal weight to these forces, suggesting that, as other research has found, both cyclical and structural factors are important explanations for the slow decline in the part-time share of employment." 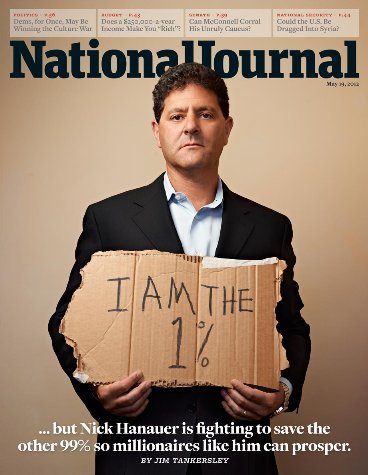 The National Journal: The 1 Percent Solution — "Nick Hanauer is the kind of innovator and venture capitalist expected to power the country’s next wave of growth. So why does he insist that only the fading middle-class can rescue America?"

Also read Nick Hanauer's related post at Politico: The Pitchforks are Coming… for Us Plutocrats — "Seeing where things are headed is the essence of entrepreneurship. And what do I see in our future now? I see pitchforks."

Put simply, boosting the incomes of the poor and the middle class can help raise growth prospects for all.

Over the longer run, persistent inequality means that the the poor and the middle class have fewer opportunities to get educated, enhance their skills, and pursue their entrepreneurial dreams. As a result, labor productivity and growth suffer."

(* Like Nick says, if you put more money in people's pockets, they'll spend more. Maybe that's the whole premise of "supply and demand" --- but where "demand" comes before "supply" --- because as Nick says, the rich don't buy 1,000 times more shirts just because they make 1,000 times more money.)

If one puts cash in the pockets of especially the poor, they spend it (not save it) thus adding to consumer spending which in turn boosts GDP.

The current trend in how CEOs are paid, particularly with stock options, creates a range of economic problems.

Several studies show that equity-heavy pay, because it makes executives very wealthy very quickly, distorts CEOs’ incentives, inducing them to take on too much risk. Instead of bearing this risk themselves, they shift it onto the rest of society, as we saw during the financial crisis. This model also encourages executives to behave fraudulently.

In order to issue stock options to top executives while avoiding the dilution of their stock, corporations often divert funds to stock buybacks rather than spending on research and development, capital investment, increased wages, or new hiring.

To top it all off, these pay packages cost taxpayers billions of dollars due to the performance pay tax loophole instituted by President Clinton.

A high degree of economic inequality precipitates financial instability because it leads to, for example, a decline in consumer demand, which has tremendous spillover effects in terms of investment, job creation, and tax revenue, not to mention social instability.

The growth of executive pay is a core driver of America’s rising economic inequality.

In The Intercept, David Dayen writes about the Securities and Exchange Commission's admission that it is not monitoring stock buybacks and market manipulation. Dayen says that buybacks are seen as an “example of deliberate financial engineering that bolsters concentration of wealth and keeps working-class wages stagnant.”
https://firstlook.org/theintercept/2015/08/13/sec-admits-monitoring-stoc...