Total October retail sales were $447.3 billion.  Below are the retail sales categories monthly percentage changes.  These numbers are seasonally adjusted.   General Merchandise includes Walmart, super centers, Costco and so on.  Department stores by themselves saw a 0.3% monthly sales increase.  Building materials increased 0.9%, perhaps on people investing more in their homes once again.  Various store retailers had a good month with a 1.8% monthly gain.  Online shopping continues to grow with a monthly increase of 1.4% and an annual gain of 6.7%.  Food and drinking retail sales has gained 6.6% for the year. 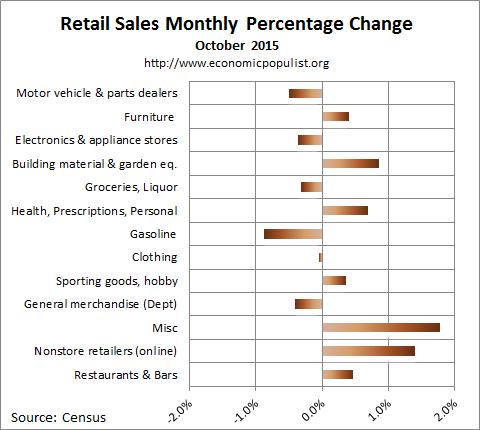 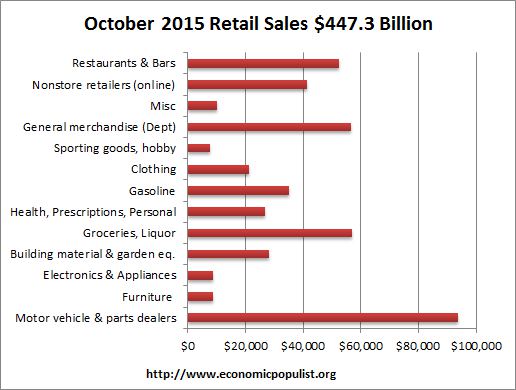 The below pie chart breaks down the monthly seasonally adjusted retail sales by category as a percentage of total sales by dollar amounts.  The size of auto sales in comparison to all else never ceases to amaze. 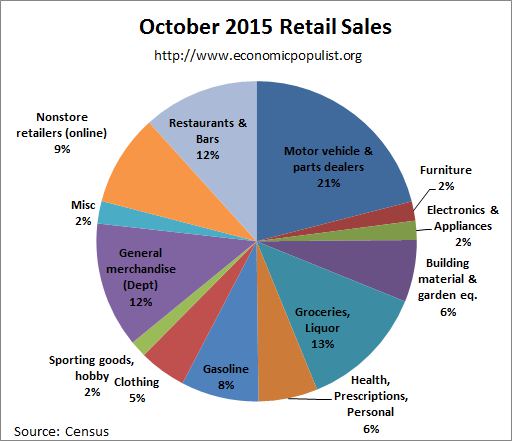 For the three month moving average, from January August to October in comparison to the May through July average, retail sales have increased by 0.5%.  The retail sales three month moving average in comparison to a year ago is up 2.0%.  Overall as shown the below graph of quarterly annualized retail sales percentage change, up to Q3 2015.  Adjusted for prices and inflation is what matters for economic growth.  While this is the 1st month of Q4, it does not bode well to be positive since inflation probably increased more than retail sales in October.