June 2012 Retail Sales decreased, by -0.5%, and this month one cannot blame just falling gas prices. Autos & Parts alone dropped -0.6% while auto dealers, part of Autos & Parts, declined -0.7%. Minus autos & parts, retail sales also decreased, -0.4%. This is the 3rd month in a row retail sales have declined. June Retail sales are up 3.8% from the same time last year. Retail sales are reported by dollars, not by volume, so dropping prices often reports as a decline in sales. For the quarter, April to June, retail sales decreased -0.2%. In comparison of Q2 against a year ago, retail sales are up 4.7%. Below is a graph of quarterly retail sales percent change. We have not seen a quarterly decline like this since Q1 2009. 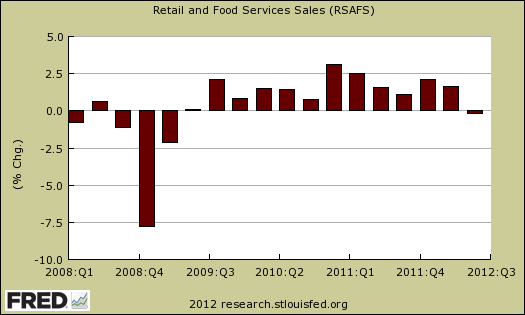 Total retail sales are $401.515 billion for June. Below are the retail sales categories monthly percentage changes. These numbers are seasonally adjusted. General Merchandise includes super centers, Costco and so on. 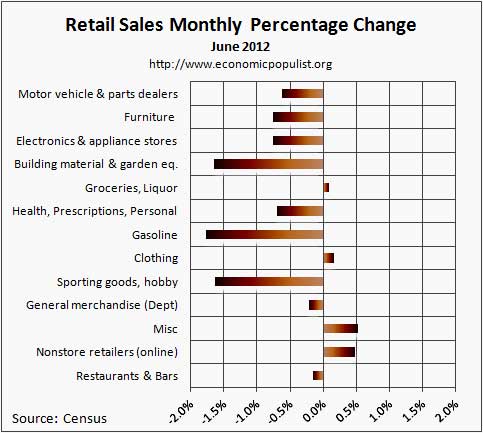 As we can see retail sales this month cannot be blamed on declining gas sales (due to dropping prices), even though gas retail sales declined -1.8%. Building material, garden equipment & supplies dealers had yet another pretty bad month, down -1.6%. Sporting goods dropped -1.6% as well for the month. Below are the June retail sales categories by volume. As we can see, cars are king when it comes to retail sales. 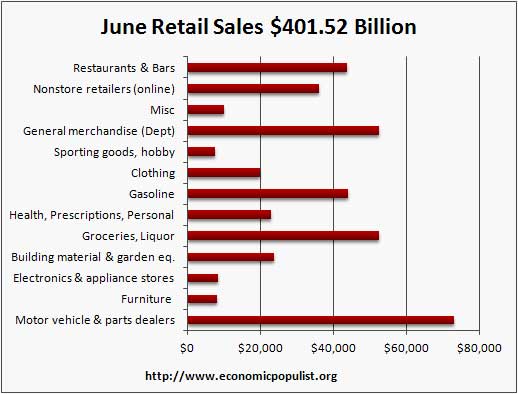 For reference sake, graphed below are weekly regular gasoline prices, so one can see what happened in June. The below chart breaks down seasonally adjusted retail sales by category as a percentage of total June sales by volume. One can see how dependent monthly retail sales are on auto sales by this pie chart. 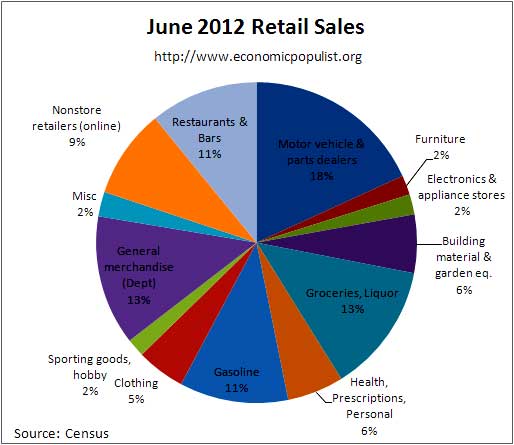 Retail sales correlates to personal consumption, which is about 70% of GDP growth. Yet GDP has inflation removed from it's numbers. This is why Wall Street jumps on these retail sales figures. Below is the graph of retail sales in real dollars, or adjusted for inflation, so one gets a sense of volume versus price increases. Below is the annualized monthly percentage change in real retail sales, monthly. Retail sales are not adjusted for price increases, not reported in real dollars. Real economic growth adjusts for inflation. Retail sales has variance, margins of error, and is often revised as more raw data comes into the U.S. Department of Commerce (Census division). For example, this report has an error margin of ±0.5%. Data is reported via surveys, and is net revenues of retail stores, outlets. Online retail net revenues are asked in a separate survey of large retail companies (big box marts). This is also the advanced report. To keep the monthly nominal percentage changes in perspective, below is the graph of monthly percentage changes since 2008. Folks, we've outdone ourselves with this month's retail sales overview. Check this out, even if you read it before! The updates include real quarterly retail sales and plotting that against real personal consumption. This has implications for Q2 GDP.

I like going into this report is just detail after reading so much bogus stuff out there claiming cell phone sales are gonna save the economy and all sorts of ridiculous rot. That's why this post is graph-o-rama, to show it is the auto industry, sales which are the backbone of the economy, to this day, not cell phone sales.