For once he's right.  President Obama came out blasting against the upcoming sequestration as a major threat to the U.S. economy.   He's right.  These draconian cuts, $85 billion for FY 2013, will be enacted starting in March 2013 if Congress doesn't stop it.  The CBO estimates this year's budget costs will cost the United States a full 1.5 percentage points of GDP.

We project that inflation-adjusted gross domestic product (GDP) will increase by about 1½ percent in 2013, but that it would increase roughly 1½ percentage points faster than that if not for the fiscal tightening.  With that slow growth, we expect that, under current laws, the unemployment rate will stay above 7½ percent through next year.  That would make 2014 the sixth consecutive year with unemployment so high, the longest such period in 70 years.

America has Congressional manufactured crisis budget cut fatigue.  Crazy people, posing as Congressional representatives, go on national TV to say up is down and black is white when it comes to the economy.  You do not cut government spending in a fragile economy, that's economics 101.  You do confront corporate greed sucking all of the money out of middle class pockets to help balance the budget deficit.  That's morality 101.

Why Congress, in particular Republicans, insist on killing the economy by self-inflicted gunshot is anyone's guess.  Who else is sick to death of fictional spin and fuzzy math?  We have more analysis on the damage wrought by sequestration. Macroeconomic Advisors estimates the GDP loss is only 0.6 percentage points and, oh my, only 700,000 more jobs will be lost in their analysis. 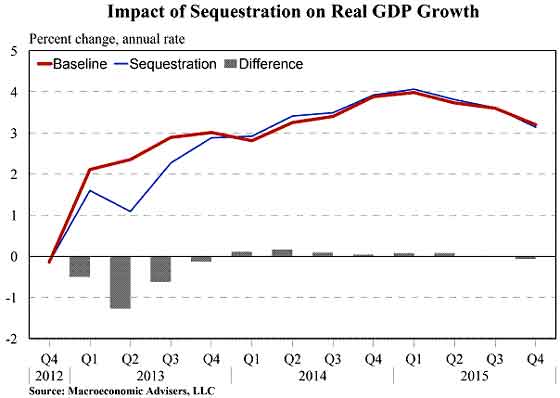 What budget cutting crazies failed to realize, unemployment begets....more federal debt due to decreased revenues.  It's a self-feeding cycle.   All of those fired people will need unemployment benefits, which adds to the federal debt.  . The Bipartisan Policy Center estimates over 1 million jobs will be lost due to the sequester.   Already the DoD is giving furlough notices to 800,000 civilian workers.  Those are middle class jobs at the DoD.  The impact is so bad, the agencies which measure the economy will be affected.  What a way to cope with bad economic policy, simply get rid of the people who quantify the results.

To most these figures of reduced GDP and unemployment rates are abstract, simply numbers.  Once the cuts go into effect, only too late will the effects be realized and the damage to workers and the economy is done.    A hearing from the Senate Appropriations Committee spells out the specific economic harm sequestration will bring:

A five percent cut this late into the fiscal year often translates into a double whammy for our agencies because fixed costs like rent and utilities can't be cut. The big cuts will be to salaries, which means furloughs, layoffs, and services not delivered to the American public.  And I want to remind everyone -- additional cuts will come due when Congress acts on the expiring CR. The Fiscal Cliff deal cut $4 billion from fiscal year 2013.  Offsets to Hurricane Sandy cut another $3.4 billion. These cuts will have to be enacted when Congress acts on the expiring CR in March.

"The Pentagon will eliminate 46,000 temporary civilian employees. That's just the tip of the iceberg. All of the Department of Defense's 800,000 employees will be furloughed one day a week for the rest of the year, and 30,000 Navy shipyard and maintenance employees would be laid off.

Additionally the great sequestration doesn't do jack long term for the federal debt as shown below by the Bipartisan policy center's graph.  Sequester only delays the federal debt reaching 100% of U.S. GDP by two lousy years. 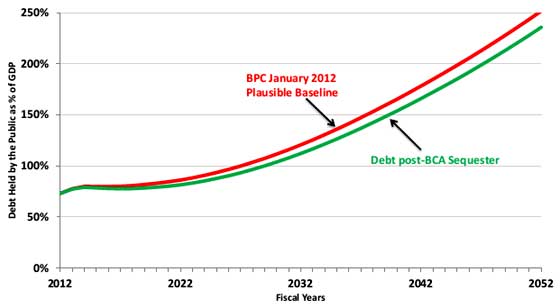 Over and over again the cut choices are not choices at all.  Reducing health care costs to level all other industrialized nations pay is a budget deficit act.  Yet over and over, Republican or Democrat, enacting single payer, universal health care is not on the table as a deficit reducer, which it is.  There are many other examples where deficit reduction could be done and even have a lasting impact, unlike the sequester.  That's the absurd thing about all of this.  While Congress makes sure our economy tanks once again, the long term debt reduction from the Congressional hatchet job on the economy is next to nil.   It is suffering without reason.

Will economic sanity and reality ever return to Congress?  Not unless all voters, conservative and liberal alike demand it.   As it currently stands Congress is determined to take the economy hostage once again.  The odds of sequestration happening are being put at 70% with nine days to go.

This is disgusting. The U.S. has 8 days until they tank the economy again, affecting millions and all of the headlines are about some murder that isn't even in the United States. Good god, with a press corp. like that can anyone blame the Obama administration for bypassing them and using social media to craft their message?

No sympathy here, Obama (along with every other pol in both parties) control/partners with the press. If the press does or doesn't do something, it's only because the political bosses have told them to. If ABC or Fox ran a story on a cat dialing a phone and saving someone's life while being videotaped, most assuredly either Dems or Republicans approved it beforehand because there was some advantage or distraction they sought while the story ran.

If the press was anymore in the bag for the false blue vs. red chicanery, it would actually be in a circle of Hell. If the press was so scary, wouldn't Chris Matthews actually ask a tough question of Obama regarding drone killings, unemployment levels at 20%+, banksters escaping justice, or playing golf during wars (like Bush II was subject to)? Or why Murdoch hasn't been subject to FCPA? Why Holder is still running the DOJ? Why Blankfein still meets with the WH? And on and on? Press? The press? And on the other side, the same issues regarding unemployment, loss of civil rights, etc. could also be asked. Will Fox News dare ask a tough question of a GOP member ever? No, instead they do the Party's bidding and have pols on as "guests" and "experts" when required - it's all scripted and according to plan.

Owned, owned, owned. Isn't it a little odd the way both D-controlled stations like CNN and R-controlled stations like Fox both seem to ignore bankster crimes and focus on crimes by the "little people"? When was the last time Cavuto or Nancy Grace spent an entire week, or 10 hours, or 2 hours solely on banks laundering money or the long-term unemployed or political corruption? GE, Microsoft, etc. literally own the press (MSNBC after all). Watch CNN or MSNBC and feel the nausea swell as Dems and Obama are hailed as saviors no matter what daily. So no sympathy if Bill Gates owned MSNBC or outsourcing GE/NBC don't get tough with Obama or cover issues - it's slightly predictable - this message brought to you by people that don't believe in nations, only profits for boardrooms. And when the GOP has the guy in the WH, the same will occur on Fox and elsewhere. The press is an organ of the state/political parties, not an objective observer, and certainly not a critic. Ailes runs Fox like its an arm of the GOP and Maddow etc. do what the WH tells them (or listens closely to what they want before deciding) so they are all in it together, no one acts alone or without the blessing of the respective party/donor/boss.

I agree but cable is ignoring what's going on here and I, for one, a sick to death of the GOP holding the economy hostage. America is getting so ripped off on medical costs and that doesn't even get lip service in the "budget debate". That is the debt killer.

When your congressional representative runs on a platform of hate for the government. Thats a clue he is not interested in economics, foreign policy or any policy for that matter. They don't care about anything except corporate cash.

In an economy of $3.54 trillion in expenses, an $85 billion (2.4%) cut in spending will do all that. Why cant they cut fraud and waste instead? Everyone agrees there's too much fraud and waste in the Govt, why not cut that out? Who's stupid idea was this sequestration anyway? Oh - Obama's. OOPS, your honor, strike that comment from the record. If $85 billion is that necessary to the economy, how did we survive just 10 years ago when we only spent $2.46 trillion or 10 years before that when we only spent $2 trillion? If a 2.5% cut will do all that, then what do we get with the other $3.15 trillion? Hey, the Fed is printing $85 billion a month into Banks to buy bonds and Mortgage backed securities, just have them cut another check. They are good for it, i think. All is good in Washington DC when you control the printing press and the media press.

As Bob Woodward has made clear, the sequester was Lew/Obama's idea. he's had over a year and a half to come up with a solution with Congress, but his laziness and intransigence is the reason we're where we're at. It's all about leadership. If the President doesn't want to have all these last minute crises, then he should set an example by at least meeting his legally required deadlines for submitting information to the public and budget proposals to Congress. His record on all these items has been so poor that no one should find his whining about the opposition party credible.

Seems it's just blame and Congress isn't moving to stop this, what a surprise. They play their never ending game of economic chicken instead of what is in the best interest of the nation.

Latest is this will stop financial reform because the cuts will impact the SEC and other regulatory bodies, the SEC is the most active trying to implement rules for Dodd-Frank.

Sequestration is stupid (quote for the DoD and they are right!) and Congress is simply going to implode the economy instead of doing their job and actually listen to economists and enact sane policy.

Yet on the news, I saw "baby cam", "shark cam" horrifying video of disaster and people dying with almost a yawn afterthought Congress is imploding our economy and doing absolutely nothing to stop it.

It's really hard to write about the economy, economic policy with events this stupid. Yet over and over again that's what we get from our politicians, absolute pure stupidity. Honestly how did most of them even get through school? So many cannot add two numbers together. Instead of even listening to people who can add two numbers together, they insist in manufacturing more crisis and other stupid agenda guaranteed to harm the nation.

Enough! Put the blame where it really is. Right square on the WHITE HOUSE and in the President's lap. Why all the BS up top! You know as well as most people with a little since that the government does not need to do any of the above, all that needs to be done is to remove thses funds from all the give away programs to foreign entities. Also, why not state that the true impact would only effect 0.0258 % of spending for Fiscal 2012/2013

No, it's not that simple, and you underestimate, significantly the actual economic impact. Frankly, it gets very old for people thinking up is down and right is left. Government spending adds to economic growth, especially government spending which provides services to the people as well as jobs. That's why this impact is so bad, it's a hatchet job and cuts funding to just those types of government spending.

Take for example, the DoD, they can easily cut projects which do not pay off, large defense contracts on technology that isn't useful, highly costly, but due to this disaster they cannot, they are supposed to cut vital services instead.

I personally could care less who is at fault, although the infamous tea party members need to go to college and take economics 101.