In his last year of office, President Bill Clinton called on Congress to make normal trade relations with China permanent. So legislation was introduced to the House on May 15, 2000 by Rep. William Reynolds Archer (R-Texas) with three co-sponsors — saying that permanent normal trade relations (PNTR) with China was a top priority, and was vital to the U.S. agriculture market (to gain access to a market with one-fifth of the world’s population).

The other crucial point that was made was that the involvement of the U.S. was needed "to help the workers of the People’s Republic of China to lead better lives". Since then, 500 million Chinese people have been lifted up into the middle-class. (Mission accomplished.)

Paul Krugman writes, "There have been huge gains for what we might call the global middle — largely consisting of the rising middle-classes of China and India." [He provides the graphic directly below] "Now for the bad news: Between these twin peaks lies what we might call The Valley of Despond. Incomes have grown slowly, if at all, for the advanced-country working classes." 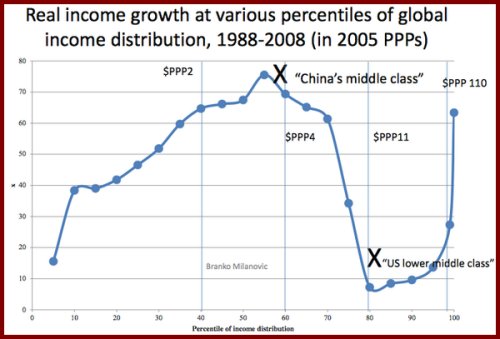 From The Atlantic: "The U.S.-based CEO of one of the world’s largest hedge funds told me that his firm’s investment committee often discusses the question of who wins and who loses in today’s economy. In a recent internal debate, he said, one of his senior colleagues had argued that the hollowing-out of the American middle-class didn’t really matter. His point was that if the transformation of the world economy lifts four people in China and India out of poverty and into the middle class, and meanwhile means one American drops out of the middle class, that’s not such a bad trade."

Since then, China has recently passed the U.S. to be the world's largest economy — partly because, American companies have been offshoring so many jobs to China (and other countries). Not to mention: 1/3 of current American jobs are STILL prone to being offshored/outsourced. That would help to explain the Bureau of Labor and Statistics' new report about why so many American workers now fear losing their jobs.

Back in 2000, Congress had claimed that they needed to pass a bill that would help stimulate the U.S. economy and promote higher growth. And the most productive and trouble-free way to keep the economy growing strong was to outsource jobs and trade more with China. (Mission accomplished.)

China was supposed to help provide America with superior markets in industry, agriculture, and technology. The down side to this was: no markets could provide and receive China’s goods like the United States' markets could. But still, legislation was passed by the House of Representatives on May 24, 2000 giving China "permanent normal trade relations" (PNTR). Then it passed in the Senate on September 19, 2000 and was signed by President Clinton on Oct 10, 2000.

Now fast forward to 2015. From Forbes: America's Trade Deficit - The Job Killer -- "There is another big factor that is not often mentioned and has a huge effect on both the manufacturing sector and jobs. That factor is the growing trade deficit, which is really the ultimate determinant of job creation in the U.S."

Since passing PNTR for China, there have been three attempts to repeal it. One attempt was in 2005 when Rep. (now Senator) Bernie Sanders (I-Vermont) and sixty one co-sponsors introduced legislation. Rep. Sanders said to the house, “Anyone who takes an objective look at our trade policy with China must conclude that is an absolute failure and needs to be fundamentally overhauled.” Sanders then delved into numbers on the trade deficit and the number of American jobs being lost to our overseas competitors.

A few years later, Representative Barbara Lee (D-Oakland) attended a press conference to announce the introduction of new legislation to repeal PNTR with China. As a cosponsor of the bill, she offered the following statement:

I would like to thank my colleagues, especially Congressman Sanders and Congressman DeFazio, for leading us in the fight to protect American workers against unfair trade policies. Five years ago, I joined 196 of my colleagues in the House to vote against granting permanent normal trade relations to China. Since then, we have lost more than 2.7 million manufacturing and technology jobs. These jobs have been outsourced by corporations that don’t care about people but only about filling their coffers. Yes, corporate greed is alive and well in this country and it is costing real people real jobs right here at home. PNTR is devastating to America’s middle and working class families – technological, textile, and steel manufacturing jobs are being lost. We need to encourage American companies to create jobs here, not make it easier for them to export work opportunities to other countries. This lopsided free trade policy is one of the greatest “sell-outs” that this country has imposed on American workers. The time is long overdue to repeal PNTR and to take a critical and honest look at all free trade agreements that are being negotiated, as we speak.

That was 5 years after Bernie Sanders' attempt. And Rep. Lee was referencing jobs directly lost to China, but not the loss of additional jobs that were lost via "The Multiplier Effect" when jobs are offshored (especially in manufacturing). As factories get "smarter" and more advanced, the multiplier increases significantly. In some advanced manufacturing sectors, such as electronic computer manufacturing, the multiplier effect can be as high as 16-to-1 (meaning that every manufacturing job could support 15 other jobs).

It's now estimated that the trade deficit with China has cost the U.S. at least 3.2 million jobs — and now, even parts of Obamacare are being outsourced.

And those jobs that Rep. Lee mentioned also wouldn't include jobs offshored to other low-wage countries — such as India, Vietnam1 and Cambodia (or to Mexico via Bill Clinton's NAFTA trade agreement). Ever since Hillary Clinton's husband granted permanent normal trade relations to China, the U.S. has lost over 64,000 manufacturing firms and at least 5.8 million manufacturing jobs2. (1. Just in Vietnam alone, Nike has 71 factories. 2. The estimated number of manufacturing jobs that were offshored is almost the same number of Americans who are currently "not in the labor force, but also want a job".)

Recently, in his last State of the Union address, President Obama had advocated for "more of the same" in trade agreements with the proposed TPP (Trans-Pacific Partnership), TTIP (Transatlantic Trade and Investment Partnership) and TAFTA (Transatlantic Free Trade Area).

"Look, I'm the first one to admit that past trade deals haven't always lived up to the hype, and that's why we've gone after countries that break the rules at our expense. But ninety-five percent of the world's customers live outside our borders, and we can't close ourselves off from those opportunities. More than half of manufacturing executives have said they're actively looking at bringing jobs back from China. Let's give them one more reason to get it done."

The crowd cheered. But a collection of House and Senate Democrats — Senator Bernie Sanders and Representatives Rosa DeLauro, Barbara Lee, Louise Slaughter and others — held a press conference to declare the TPP a “race to the bottom.”

The Economic Policy Institute wrote: "If policymakers — including the President — are really serious about boosting wage growth for low and moderate-wage Americans, then the push to fast-track TPP and TTIP makes no sense." But yet, that's what Rep. Paul Ryan and the GOP are pushing for. So is Obama really a closet Republican? (I know you lie, 'cause your lips are movin')

The Huffington Post reports that with President Obama declaring his intentions to push for legislation giving him authority to move forward unilaterally with these trade deals, the Democrats made one thing clear: "They don't have his back." But with a Congress run by Republicans, it's doubtful Congress will block Obama's action, because Republicans historically support trade agreements for corporate profits. Whereas, the Democrats are usually more concerned about the loss of jobs and a lack of environmental, labor and consumer protections.

Paul Krugman recently pointed out that the GOP's only jobs bill is the Keystone pipeline — and that it would only create 42,000 temporary jobs — and that Obama's economy is already creating that many jobs every five days. But you can bet that, if more jobs are created, the GOP will take the credit or say it was "in spite" of Obama's policies. And if we lose more jobs, the GOP will say it was "because" of Obama's policies. But either way, with these trade deals, American workers have been getting screwed by both political parties.

It's said that a picture is worth a thousand words — and Rod Stewart says every picture tells a story; but these two charts below from the Bureau of Labor Statistics (showing the state of the American work force ever since Bill Clinton had signed the PNTR legislation in 2000) tells the stories of millions of displaced American workers.

As one can see, the employment-population ratio and the labor force participation rate had both peaked in 2000; but ever since 2000 (when PNTR was passed for China), both have been in decline. Is this just a mere coincidence; or is it because of bad trade policies? 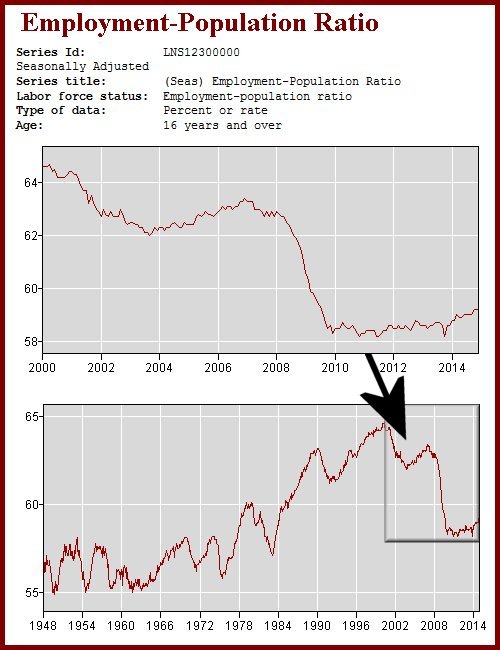 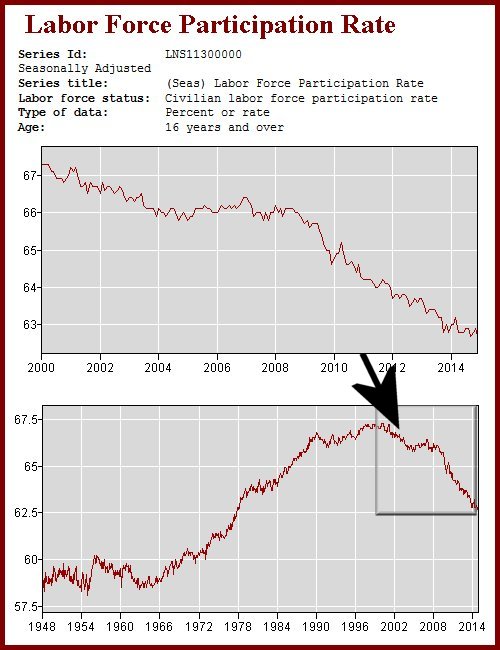 And for those of you who that like to argue that these declines are due to an "aging work force" and retirees, think again. Robert Oak (at the Economic Populist) gave us a very detailed analysis of the last job report earlier this month:

* Editor's Note:  I like football as much as anybody else — especially when it comes to Superbowl Sunday. But for the time being, can we get the mainstream media to spend more time covering more newsworthy subjects (such as the offshoring of American jobs), rather than wasting our idle time by reporting on deflated footballs? From three major cable TV news networks: "BREAKING NEWS!!! New England Patriots quarterback Tom Brady --- the prime suspect in Deflate-Gate --- is about to hold a press conference! --- Tune in after the commercial break!"