Who could forget AIG? The never ending bail outs, the fictional derivatives, the funneling of U.S. taxpayer money to foreign banks, the outrageous bonuses and most of all, TARP. Yet it seems the Obama administration wants you to do such that. It seems the Treasury department planning to dump off AIG by the end of the year. What they are not telling you is the total taxpayer losses.

The biggest part of that strategy is for Treasury to begin converting its $49 billion preferred stake into common stock for sales by the first half of next year.

Common stock means no dividend, coming in last in the shareholder pig trough and taking a financial bath.

The Wall Street Journal is reporting the deal consists of:

The U.S. Treasury converting some of its $49 billion in AIG preferred shares into common stock. Then the stock can be sold over time. The conversion, which could take place at about $35 an AIG share, is likely to occur in the first half of 2011.

Why is Treasury converting to common stock? Is it to extend TARP de facto, allowing them to hold on to 2011, all the while making it appear they got out of the AIG bail out biz by 2010?

Below is the table, from the last TARP Congressional Oversight report, on how much bail out money AIG still has. 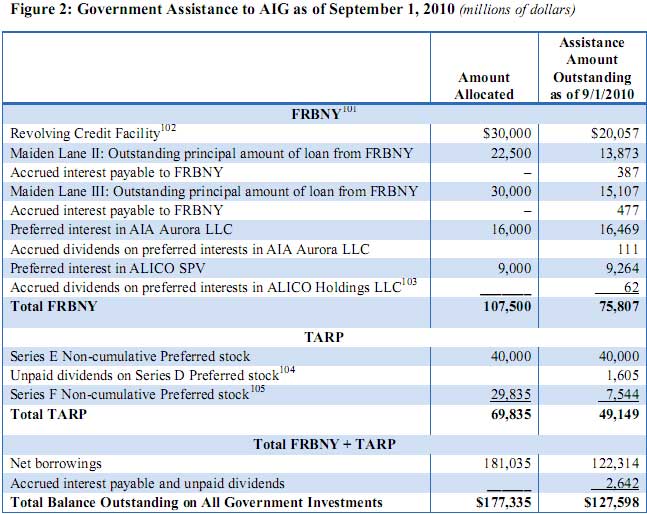 The government is seeking to dispose of its AIG stake as Chief Executive Officer Robert Benmosche, 66, prepares divestitures of two non-U.S. divisions that he said would largely repay the firm’s Federal Reserve credit line. MetLife Inc. said this month its purchase of American Life Insurance Co., for about $15.5 billion, is “on track” to be completed on Nov. 1. AIG may hold an initial public offering of another business, AIA Group Ltd., in October.

The insurer’s objective is to “repay the taxpayers and position AIG, over time.

The New York Times, notes the stall tactics to avoid a credit rating downgrade and a dumping of AIG stock:

To close the deal by the end of the year and avoid a downgrade, A.I.G. will have to complete a number of steps. Foremost is securing a credit facility from a bank to replace the one now provided by the Federal Reserve Bank of New York, the people briefed on the negotiations said. As part of the deal, the Treasury will convert its preferred shares into billions of dollars’ worth of common stock.

Underscoring the risks of huge government bailouts, the government may be forced to sell its stake very slowly. And it is not at all clear that the government will recoup its full investment, some analysts say.

Yves Smith from Naked Capitalism, implies, due to bail out politics, the Treasury will enable, a shitty deal:

These sanitized phrases deliberately mask what the Administration is so keen to hide: that it has been badly overmastered, whether by incompetence or design, by the world’s biggest deadbeat. And the government’s eagerness to distance itself from a $182 billion sinkhole means it is yet again giving more unwarranted financial concessions.

Let’s not kid ourselves: all this fancy financial footwork is to divert public attention from the fact that AIG will deliver big losses to the taxpayer.

Current loss estimates on AIG vary, from $35 billion to over $50 billion (CBO, OMB, Treasury). AIG has received $185 billion in government bail out funds. Last June, the Congressional Oversight Panel released a scathing report on AIG. The last TARP COP report (TARP ends October 3, 2010), states losses to taxpayers are highly dependent upon the AGI common stock value. The report also states how AIG is going to pay back the government is extremely unclear.

So, is this latest move by Treasury an attempt to hide the losses and the fact taxpayers are going to take a bath on AIG?

AIG deal. What's interesting is through the common stock conversion the U.S. will own more of AIG than it does now.

Claims the Fed will be paid off first.

Uncle Ben should invole the Jean Shepherd rule: "In God we trust, all others pay cash." If funny money does the job, have I got a deal for the Fed and the Treasury. I can print certificates in mt basement, if they will give me cash for them.

Frankly when it comes to bonds, money theory and so on, I'm much more weak, but I spent a lot of time on that post and concluded the Fed will "print more money", but not for the reasons people are thinking. I see never ending see posts on EP being read and linked to, referenced, and since we moved to the new server, the traffic has increased, but in terms of comments, it's really slacked off.

Gotta figure out a web method to stop all spam yet enable and encourage easier discussion I think is part of the problem.

But I'd like to see some feedback because when it comes to global money supplies and those topics, it is so easy to make an analytical mistake...

but on the other hand, we have all sorts of idiots out there making their claims and Glenn Beck has become a multimillionaire spewing nonsense, so how could anything I write be worse?

On AIG, this is just one of those things that stinks strongly on slight of hand, but then again, the bail outs, much of it has been just that. At this point, it's all so corrupt, I just almost do not care with the general public being oblivious, focusing in on "smaller government" and turning around demanding policies which create jobs, which really implies "bigger government". (How about efficient and not corrupt government?)

I also think we're seeing a host of last minute moves by the administration and Democrats, all in an attempt to not lose their rear ends in this election.

What is QE2 going to do but inflate gold prices? You can lead a horse to water, but when capital is free flowing and the well is deeper elsewhere, that horse just bolts.