Federal Reserve Chair Ben Bernanke gave a 60 Minutes interview and now the world is all abuzz with the possibility of more quantitative easing. He said other stuff ya know, like income inequality is a real problem in the United States and the unemployment rate could tip the scales into another recession. He even came clean with the reality 2.5% annualized GDP growth is barely enough to maintain the status quo. Watch the interview for yourself below: 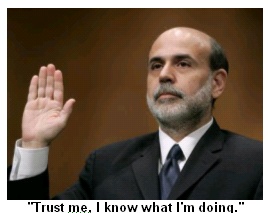 Does Ben Bernanke make any connection between the asset bubble in a commodity like corn, and the economic pressures this creates for the middle class or poor people? Given their lofty and isolated position, and the fact that Fed officials talk only to businessmen and millionaires in Congress, one of the things most lacking in Fed policy debates, public or private, is any concern for the average person in the US. It’s as if these are the people of least concern to the Fed, or if they are of concern, it is only as economic factors in econometric models. You get the impression that the Fed has, for a long long time, forgotten about the real, and often immediate personal consequences its policies have for the average person. Numerian