If there is one report you will read on China, this is the one. The U.S. China Economic and Security Review Commission releases a report on China every year and it will make the hair on your head stand on end. Beyond the de facto currency manipulation China is doing and how the United States needs to act and should have done so yesterday, did you know China has gotten American corporations to give up their technical know how to them? Yup, that's right, by dangling it's 1.3 billion person mythical consumer market as motive, China has forced U.S. corporations to move there and even worse, literally handed over to China their advanced research and development, technology, manufacturing techniques, never mind the United States manufacturing base. Graphed above are Chinese imports, zooming up like a weapon of mass destruction pointed at the U.S. economy. Any American policy demanding foreign corporations manufacture here in order to sell to us? Hell no! Gets worse. China took advantage of the financial crisis to gun after two more market sectors, that being the very lucrative aircraft manufacturing sector as well as alternative energies. Yes, the infamous green economy that was going to save the United States is made in China.

Following the 2007–2009 global financial crisis, while much of the world continued to struggle, China’s economy quickly returned to its previous trajectory of double digit growth fueled by an export-led strategy. With this strategy, China’s leadership seemed determined to capitalize on its advantages, even at the expense of its neighbors and major trading partners. Furthermore, over the past year, China has increased its assertiveness when interacting with its neighbors, especially in regard to its maritime territorial disputes in the East and South China Seas. Finally, China continues to develop its military capabilities, some of which appear directly targeted at the U.S. military.

China has provided its solar and wind industries with government subsidies while erecting protectionist trade barriers to keep out American and European suppliers. Of greater concern are restrictions China recently announced on the export of rare earth minerals. These restrictions will likely impact U.S. and European manufacturers of advanced electronics, powerful batteries used for low-emission cars, and precision-guided weapons. Beijing’s move is certain to put foreign competitors in advanced technology products at a disadvantage, requiring them to either produce in China or pay more for a dwindling global supply of the scarce electronics components.

Did you know China literally changed their state secrets laws and made them retroactive? That they can jail foreign persons and companies? Nice, there is no treaty recognizing U.S. judgments and now that we have Americans and U.S. companies in China, magically we can have some report, piece of intellectual property, whatever from the vagueness of China, declared a state secret, a criminal offense! From the report:

Foreign companies may be prosecuted for obtaining financial, investment, managerial, and organizational information about state-owned competitors. For example, an American geologist was sentenced in July to eight years in prison for purchasing publicly available geologic reports that Chinese authorities retroactively deemed to be state secrets.

We can't even get any action on people and businesses which brought the entire economy to it's knees while China is putting in prison Americans, almost on a trumped up charge whim!

Did you know cyber attacks on American companies, to steal intellectual property secrets are originating from China? That' industrial espionage through packet capture is going on? That other Internet censorship acts are also trade barriers? 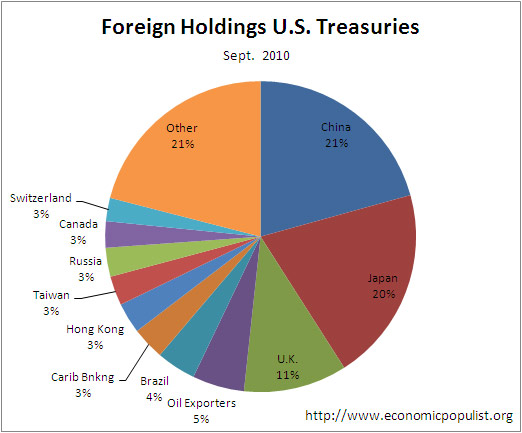 The above pie chart shows the largest foreign holders of U.S. Treasuries. Wonder why China is the largest holder of U.S. debt? Two words: currency manipulation. The report details how this works and here's the end result:

In order to support its export-promoting economic policies and suppress the value of the RMB, the Chinese government has continued channeling its foreign exchange earnings into U.S. government debt, becoming the single largest foreign purchaser of U.S Treasuries. Although the size of China’s holdings has raised concerns about the degree of influence China has on the U.S. economy the lack of alternatives and the potential detrimental impacts on China’s economy make it unlikely that China would stop buying U.S. debt or liquidate its holdings altogether.

The report also calls cash on the spin that somehow signing the China trade treaty in 2000 would make that nation more democratic and also points out getting any justice on trade deputes with China is almost a farce (this author's words). Even more odious, remember that mythical 1.3 billion member consumer market? The supposed reason so many U.S. based corporations have turned into Benedict Arnolds? As a share of China's GDP, consumer consumption in China has dropped from 46% to 35% of it's share of the economy.

Of course China is now on a media campaign to blast and try to discredit this report. But that's typical China. Anyone reading this site, with it's overviews of U.S. economic reports, knows the U.S.-China Economic and Security commission is telling truth and probably could write even more damning examples of our new bully on the block, China.

Section 2: The Implications and Repercussions of China’s Holding U.S. Debt

Section 301 of the 1974 Trade Act sounds innocuous enough until you read it. Section 301 of the 1974 Trade act is the legal authority for the President to take all appropriate action, including retaliation, to obtain the removal of any act, policy, or practice of a foreign government that violates an international trade agreement or is unjustified, unreasonable, or discriminatory, and that burdens or restricts U.S. commerce.

What this means is the commission is recommending to the President of the United States to take immediate action, bypassing WTO remedies for validate disputes, and even retaliate against China for their currency manipulation and unfair trade practices. In other words, slap a broad based tariff against all Chinese imports to rebalance the currency exchange rate ourselves.

In other words, unlike our government, this commission is recommending the U.S. stop messin' around with China and do something now.

Below is a graphic representation of the pegged RMB, or Chinese Yuan, their currency, against a broad trade exchange rate of the U.S. dollar. These indexes come from the Fed's foreign exchange indexes. The Yuan was up-scaled and all indexed to January 2006, to show the values on the same graph. What's important to note is the Yuan is relatively flat, while other currencies, even when including China in the Asia exchanges, reflect movement. Notice how flat China's currency was during the financial crisis. China pegged it's currency to protect it's exports. The movement in currencies is not to scale in the graph, it's simply to show in comparison to the broad dollar exchange, China is manipulating their currency by pegging it to the dollar. The Yuan is considered undervalued by 20-40% by most economists.

The Renminbi by itself, shown below, so one can clearly see the currency peg of the Yuan as China catapults to the world's #1 economy. I strongly recommend reading the entire report. Until then, consider these facts from the section on China's affects on the U.S. economy in the report.

After three decades of growth averaging nearly 10 percent a year, China passed Japan in the first half of 2010 to become the world’s second-largest economy, after the United States. Although the gap between China’s $5 trillion economy and the nearly $15 trillion economy of the United States remains very large, China’s advancement is remarkable for a country whose gross domestic product (GDP) was just half as much five years ago. China’s per capita income has increased from $930 in 2000 to $3,600 in 2009. China is America’s biggest trading partner in the Asia-Pacific region and its second-largest trading partner overall, after Canada.

While the United States and the European Union (EU) are struggling in the wake of the global financial crisis, China has continued to grow: In the first quarter of 2010, China posted growth of 11.9 percent at an annualized rate.4 Although growth has been moderating since (10.3 percent in the second quarter at an annualized rate), China’s economy is forecast to expand about 10 percent in 2010—continuing a remarkable, three-decade streak of double-digit growth on average. As the holder of the world’s largest stock of foreign exchange reserves ($2.65 trillion as of October 2010).

Beijing also questioned the role of the U.S. dollar as the global reserve currency and has led the drive for greater representation on global bodies, such as the International Monetary Fund (IMF) and the World Bank. China’s leaders have grown more confident on the international stage and have begun to assert greater influence in Asia, Africa, and Latin America with special trade agreements and multibillion dollar resource deals.

Yet more clues of China's currency manipulation, the Taiwan dollar appreciated twice as fast to the Yuan. Investors are saying the Taiwan dollar is a proxy for how fast the Yuan should rise. Bear in mind as a placatory gesture to try to reduce international pressure, China recently repegged the Yuan at a 2.3% appreciation to the dollar exchange rate.

Yes, I think it is about time that Americans and the the American government realize just exactly what is happening in China. We need to make sure that they will no longer have this ability in the future.

What's amazing to me is how this report, beyond some 18 minutes of packet capture and then a flurry of denials on those numbers quoted, is how few reporters or anyone actually reads this information and reports on it. This commission has given dire warnings on China for some time now and it falls on deaf ears. Read the debt holdings section and be very afraid.

It has long been my contention China seeks to exploit the "strategic flaw" in US capitalist society by using it's inherent openness & profit motive to give them better position to first understand then defeat their enemy. As the successor of the Communist Crown, I feel they see it as their sovereign duty to do away with capitalism, by any means necessary. Even if it means adopting "trade relations" with their opponent so as to bankrupt them. China is lending money with which the US Govt. & it's consumer class uses to purchase increasingly more Chinese goods at an artificially depressed price-point or credit to fund unpopular wars abroad without taxes at home. Eliminating US economic competitiveness thus undermining it's currency in the marketplace, is how China is now combating it's enemy.

removed "completely" for you are right, first they must file a complaint. Thank you very much for writing about this error in a comment. I try to be factual, even when writing Populist rants so if I make an error I am very grateful someone corrects it!