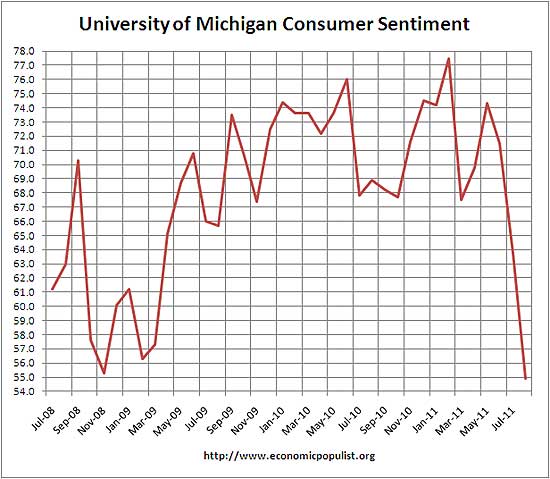 The University of Michigan Consumer Sentiment Index rose to 71.6, a 5.8% monthly increase. The press proclaims this is the highest since June 2009. That's true, but from the graph below, that's nothing to get all excited about. 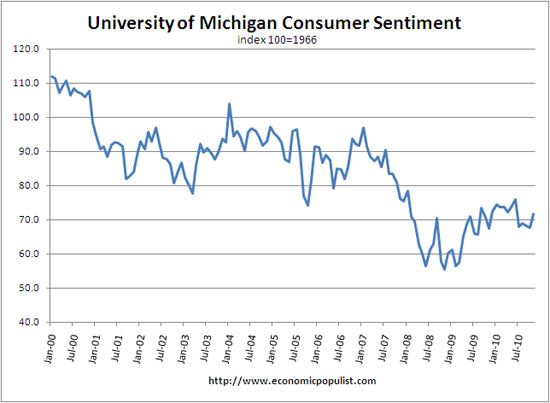 The University of Michigan/Reuters consumer sentiment came in at 67.9 for October, from a revised 69.8 value for September. From Seeking Alpha quote of the Survey's chief economist:

No surprise to readers of this site, the University of Michigan Sentiment Index declined to 66.6. Might as well have fun with the news, since the data points to yet another reality check by most Americans that we're not doing too good.

The University of Michigan Consumer Confidence index is now at a one year low.

Perhaps you saw this headline in the WSJ the other day.


With signs growing that the recession has ended, U.S. consumer confidence rebounded in August, especially regarding expectations for the economy six months from now, a report released Tuesday said.
The current month's reading was far above economists' expectations of 47.0, according to a survey conducted by Dow Jones Newswires.

Robert Oak did a great job breaking down the numbers, which showed that things weren't nearly as rosy as first suggested. In fact, the survey didn't make all that much sense.
Well, it turns out that there were two other consumer surveys released this week that the media mostly overlooked, that weren't nearly as positive.

University of Michigan consumer sentiment positively surprised for early April. The improvement, at 61.9, while modest,is nevertheless the most positive consumer reading since mid-Black September.


U. S. consumer confidence suffered its steepest monthly drop on record in October, a survey showed Friday, as the worst financial crisis since the Great Depression sent shocks waves through the economy.

What can an economic recovery build upon? - 33978 reads
Almost a quarter of all homeowners are now underwater - 23010 reads
Jobless rate slows, unemployment up and traders are happy - 24600 reads
Abiding Ado About Oil - 40320 reads
Why So Little Self-Recrimination Among Economists? - 47827 reads
It's time to live within our means once again - 28763 reads
Is there Fraud in Disability — or in the GOP? - 56848 reads
A "Decisive Defeat" But Is Anyone Winning? - 31747 reads
Gustav Eying Gulf Oil and the LOOP - 31942 reads
Why So Little Self-Recrimination Among Economists? Part 2 - 13534 reads