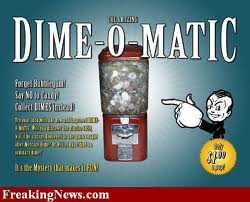 The dollar is surging today, and its because of a critical decision in Europe.

It's only been since Sunday when Europe did a shock and awe dumping of almost a $1 trillion dollars to bail out their impending sovereign debt crisis.

Here is the Euro to the Dollar. The EURO is imploding: 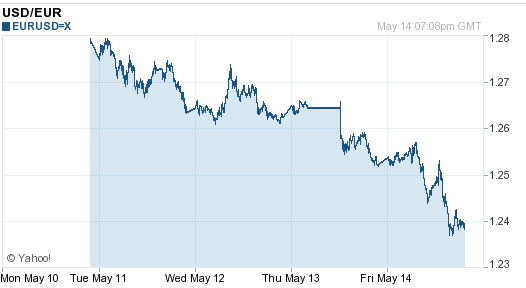 The standoff is over. Greece made painful cuts, so the rest of Europe is stepping up to bail them out. Expect this scene to get replayed again in the coming years.

Talk about doomsday analysis, this has to be it. An analyst from Société Générale (French Bank) is concluding the Euro area is headed for a break-up:

Southern European countries are trapped in an overvalued currency and suffocated by low competitiveness, a situation that will lead to the break-up of the euro bloc, according to Societe Generale SA’s top-ranked strategist Albert Edwards.

The EU Chamber of Commerce has released a report, Overcapacity in China: Causes, Impacts and Recommendations.

Overcapacity is a blight on China’s industrial landscape, affecting dozens of industries and wreaking far-reaching damage on the global economy

The reports says China's stimulus package has made this overcapacity much worse.

One of the problems is China dumps it's excess goods onto the market, selling them for much less than the cost to produce.

This hurts other national economies in terms of wiping out their domestic industries through unfair competition.

I think the report is a little polite, ignoring China's intentional and strategic market dumping and other strategies to capture yet another manufacturing sector for itself long term.

Now that the United States has relaxed mark-to-market rules, now Europe does too?

European Union ministers said it is “critical” that convergence on accounting standards is reached on the continent to ensure that the region’s banks are not placed at a disadvantage against U.S. competitors.

Absurd cable TV pundits rant and prattle about on how Obama is socialist. Uh, not so far. What the Obama administration is doing is corporate welfare.

What's the real difference between Europe and the United States?

In a nutshell they have balls and we don't.

In G20 Protests now going on all over Europe are some hints.

Protesters focused the Royal Bank of Scotland because it was bailed out by the British government after a series of disastrous deals brought it to the brink of bankruptcy. Still, its former chief executive Fred Goodwin — aged 50 — managed to walk off with a tidy annual pension of 703,000 pounds ($1.2 million) — just as unemployment in Britain is at 2 million and rising.