JOLTS is a new survey, around for a decade, and it tracks on Job Openings and Labor Turnover. The MSM is all abuzz with the news that job openings increased 7.6% to 2.7 million in January 2010, an 11 month high. So let's dig a little deeper, beyond the feel good buzz. Here is the full report.

There were 2.7 million job openings on the last business day of January 2010, the U.S. Bureau of Labor Statistics reported today. The job openings rate rose over the month to 2.1 percent, the highest the rate has been since February 2009. The hires rate (3.1 percent) and the separations rate (3.2 percent) were unchanged in January.

The BLS JOLTS report for August 2009 was released earlier this week and it's just damning on job creation in the United States. 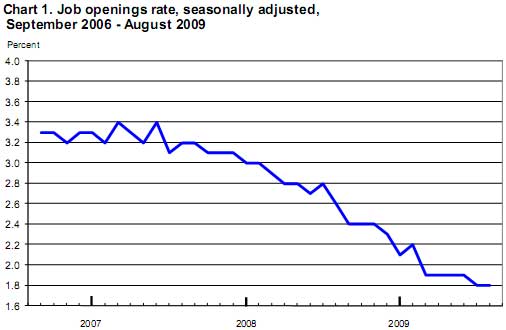