If we leave aside the war-impacted years of 1942 to 1946, the largest annual deficit the United States has incurred since 1920 was 6 percent of gross domestic product. This fiscal year, though, the deficit will rise to about 13 percent of G.D.P., more than twice the non-wartime record. In dollars, that equates to a staggering $1.8 trillion. Fiscally, we are in uncharted territory.

Because of this gigantic deficit, our country’s “net debt” (that is, the amount held publicly) is mushrooming. During this fiscal year, it will increase more than one percentage point per month, climbing to about 56 percent of G.D.P. from 41 percent. Admittedly, other countries, like Japan and Italy, have far higher ratios and no one can know the precise level of net debt to G.D.P. at which the United States will lose its reputation for financial integrity. But a few more years like this one and we will find out.

An increase in federal debt can be financed in three ways: borrowing from foreigners, borrowing from our own citizens or, through a roundabout process, printing money. Let’s look at the prospects for each individually — and in combination.

In fact, John Maynard Keynes long ago laid out a road map for political survival amid an economic disaster of just this sort: “By a continuing process of inflation, governments can confiscate, secretly and unobserved, an important part of the wealth of their citizens.... The process engages all the hidden forces of economic law on the side of destruction, and does it in a manner which not one man in a million is able to diagnose.”

Pacific Investment Management Co., the world’s biggest manager of bond funds, said the dollar will weaken as the U.S. pumps “massive” amounts of money into the economy.

The dollar will drop the most against emerging-market counterparts, Curtis A. Mewbourne, a Pimco portfolio manager, wrote in a report on the company’s Web site. The greenback is losing its status as the world’s reserve currency, he said.

Bear in mind this is when the Producer Price Index contracted in July, an indication of deflation.

The longest U.S. recession since the Great Depression of the 1930s has crushed demand and pummeled prices throughout the economy, keeping inflation pressures firmly at bay despite massive official efforts to stimulate growth.

It's not just the United States, Canada's wholesale prices also plunged the most in 56 years.

So, while the debt is at a record, $1 trillion, and many are wondering on the point of no return, the reality is demand has collapsed and to fight deflation, the Federal Reserve dramatically increased the money supply.

So, while we receive dire warnings of devaluing of the dollar as well as inflation, it's pretty clear the U.S. is still in a deflationary pattern. Demand has collapsed. 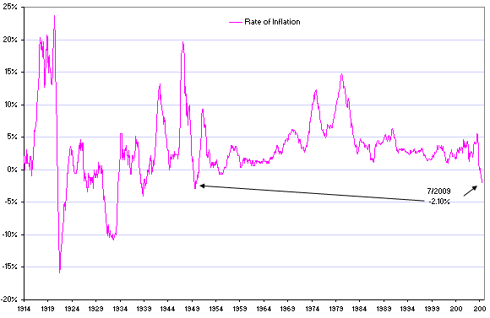 So what's going on? The Fed's money printing press is not making it to the real economy, so it's just kind of sitting there.

So, with all of this said, it sure doesn't seem inflation is returning anytime soon and therefore, in spite of the massive debt, how exactly is the dollar going to tumble and devalue?

Exactly how fast can China dump their Treasury holdings and obtain a new reserve currency to cause inflation? Would that counter influence the obvious deflation (housing prices anyone, wages?) occurring during this recession?

Keep in mind that Pimpco always, ALWAYS talks its book. It is a large player who attempts to move the market and may not necessarily actually be betting the way its statements make it seem (Did Pimpco say it was actually long or short the dollar?)

When discussing inflation and the dollar, always also keep in mind that there is a third side to the triangle, and that is -- other currencies. For example, here is a link to an updated graph of Oil in dollar terms and also euro terms:

You can see that Oil has moved up in euro terms as well, albeit not so much as the dollar. Simply put, every government in the planet is engaged in competitive devaluation of their currencies: as to stuff, their currencies will devalue, but as among currencies themselves, not so much.

Brad De Long points out that:

it is astonishing. Between last summer and the end of this year the U.S. Treasury will expand its marketable debt liabilities by $2.5 trillion--an amount equal to more than 20% of all equities in America, an amount equal to 8% of all traded dollar-denominated securities. And yet the market has swallowed it all without a burp...
....

Last fall I had a large number of conversations with bond market observers who said things like: "Interest rates are low now, but look at how much the Treasury is going to borrow over the next eighteen months. When those borrowings hit the market, Treasury bond prices are going to fall bigtime and interest rates rise. At the moment bond prices are high and interest rates are low, but that's only because finance firms' top management aren't letting traders off their leash to short Treasuries. The traders all expect Treasury prices to fall and interest rates to rise. Mark my words: when the Treasury tries to sell all those bonds next year, it won't find buyers at anything near current prices. Where will all the extra savings to buy those bonds come from?..."
....

Let me give you the Hicksian argument about what happens in a financial crisis--a sudden flight to safety that greatly raises interest rate spreads, and as a result diminishes firms' desires to sell bonds to raise capital for expansion and at the same time leads individuals to wish to save more and spend less on consumer goods as they, too, try to hunker down.

In Hicks's model, the immediate consequence is an excess demand for (safe) bonds in the hands of investment banks: bond prices rise, and interest rates falls. As interest rates fall, (a) firms see that they can get capital on more attractive terms adn so seek to issue more bonds, and (b) households see the interest rate they can get on their savings fall, and so lose some of their desire to save. The market heads toward equilibrium. But as the market heads toward equilibrium, something else happens as well: the fall in interest rates and the rise in savings is accompanied by a greater desire on the part of households and businesses to hold more of their wealth safely--in pure cash. And so the speed with which cash turns over in the economy, the velocity of money, falls. And as the velocity of money falls, total spending falls, and workers are fired, and as workers are fired and lose their incomes their saving goes from positive to negative.

....
In normal times, the correct policy response is for the Federal Reserve to inject more money into the economy....

A little thought, however, will lead us to the conclusion that such open-market operations may fail. In them, the Federal Reserve is buying bonds, shrinking the supply of bonds out there--and thus pushing up their price and pushing down interest rates. For each amount that the Federal Reserve expands the money stock, therefore, it puts downward pressure on interest rates and thus on monetary velocity. In the limit where interest rates are so low that people don't really see a difference between cash and short-term government bonds like Treasury bills, open-market operations have no effect because they simply swap one zero-yielding government asset for another.

It is in this situation that a government deficit can be useful. A government deficit means that the government is printing and issuing a lot of bonds at exactly the same moment that private investors are looking for a safe asset to hold. As these bonds hit the market, people who otherwise would have socked their money away in cash--thus diminishing monetary velocity and slowing spending--buy the bonds instead. A large and timely government deficit thus short-circuits the adjustment mechanism, and avoids the collapse in monetary velocity that was the source of all the trouble.

Thus a Hicksian analysis last fall would have said--did say--"don't worry: a large flood of government bond issues won't push up interest rates; it will stem a collapse in monetary velocity instead as people who want to hold their wealth in safe form and would otherwise be holding money find themselves happy holding government bonds instead."

And it has all come true.

M2 is up 10%, the monetary base 100%, we're deleveraging by feeding the denominator. What a deal. We'd better get that back with interest.

Also, was Buffett really calling for more taxes in that op-ed? People are going to start asking about his birth certificate pretty soon.

was I don't believe Buffett or Pimco on this. Not immediately, not as long as the economy is getting these kind of deflationary EIs.

Although yeah, long term it's scary as hell.

I'll believe it when I see it but if true, is some good news on the deficit at least.

great article. But,sadly, it never helped the Japanese increase money velocity. Although, without The Japanese requiring the pension system to hold 67% in JGBs, its not clear how the JGB market would have turned out.