Did you know the United States has the worst income inequality of any industrialized nation?  So says the OECD in this study.  Globally, income inequality has increased more from 2007 to 2010 than during the twelve years previous and America is sure enough #1.  While the Great Recession might be relabeled the great wealth transfer from the middle classes to the super rich, it is not the actual cause for such American economic injustice.  The primary cause is Congress and their never ending giving to the rich through the U.S. tax code.

First some stark facts on income inequality.  The most common measurement for economic injustice is the Gini coefficient.   The Gini is a ratio where zero means all people have equal income and the value one means just one single person has all of the money and nobody else has any.  The higher the Gini ratio is, the worse income inequality has become in that nation.  In 2011 the United States had a Gini index of 0.477, which is a 1.5% increase from 2010 and this is a very high ratio! 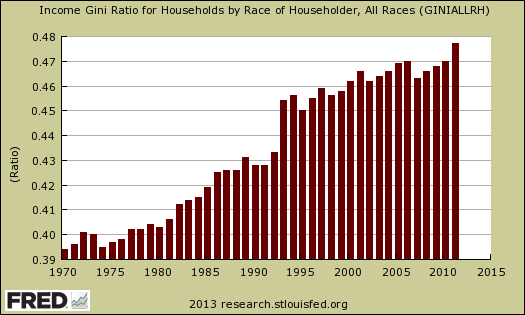 Over the past 40 years, the top 1% have seen a doubling of their income in the United States.  The latest OECD data is from 2010 and as we can see in the below chart, the United States had the worst income inequality of any industrialized nation in 2010 and note this does not account for the huge spike in the Gini for 2011.  The below graph shows the Gini index in blue bars and is the ratio for disposable household income inequality.  Only Turkey, Mexico and Chile are worse for household disposable income inequality and these are all 3rd world nations.  The truth America is we are a 3rd world nation, with scores of poverty stricken, as amplified by the fact over 15% of the total population requires food stamps to survive.

The yellow dots in the above OECD chart represent yet another horrific statistic.  The yellow dots, scale on the right, is the difference between the richest 10% of a country and the poorest 10%.  As we can see in 2010 only two nations, Mexico and Chile, were worse in the gap between rich and poor than the United States.  Again, most of America is clearly in 3rd world status at this point and the illusion of America being the wealthiest nation on Earth is only for a select few.

A recent paper The Top 1 Percent in International and Historical Perspective (pdf), authors Facundo Alvaredo, Anthony B. Atkinson, Thomas Piketty, and Emmanuel Saez, analyzed the causes of income inequality in the United States.  This study tries to ascertain why the U.S. has turned into the land of the haves and the have nots.  They list four reasons the rich have gotten way richer and the middle class wiped out.

The root cause of it all is the U.S. tax code.  Tax policy starting with Reagan and the Bush tax cuts gave more to the top 1% and less to the bottom.  This has been documented extensively and overviewed here and here.

There is a difference between earned income from wages, working and capital income.  Capital income is from stocks, investments, interest, dividends and rents.  What the below graph tells us is the U.S. tax agenda of lowering the top marginal tax rates for income and capital gains is having one nasty effect.  It is enabling income inequality like a wild, uncontrolled brush fire.  The authors imply the too low top 1% tax rates also have enabled managerial earners, i.e. corporate executives, to negotiate absurd pay packages with their extra take of the American pie from too low top marginal tax rates.  The executive class greed is so bad at this point, it is a detriment to overall economic growth. 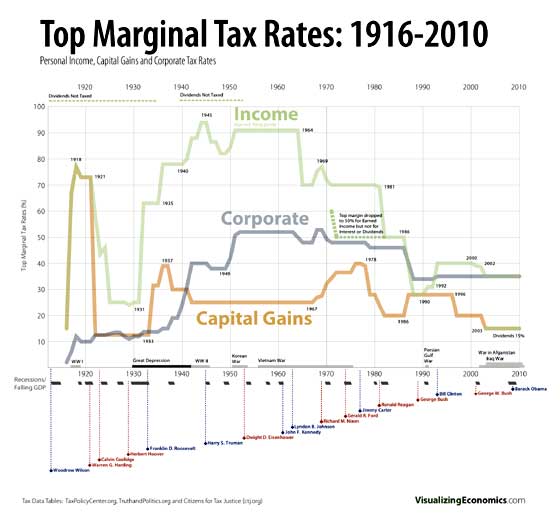 The above chart is from Visualizing Economics and to see more visual details on tax rates and which administration enacted them, click here.

The above quote from the paper is true, as layoffs and thrashing of America's workforce is still a daily occurrence while CEO pay never takes a hit.  In other words, executives take pay right out of the staff's pockets, often through layoffs, only to line their own.

Below is a graph of the top 1%'s income share of U.S. national income.  The sold line is with capital gains and the white is without.  The thing to notice is the bowl shape and how the super rich getting more of the American pie is directly correlated to tax policy.  The other element to notice is all of the great middle class represents that bottom of the bowl in the 1950's time frame, which is now gone.  The top 1% had 9% of the income in 1976 and now have 20% of it in 2011.  The middle of the graph might be viewed as a bowl of greed the uber-rich sucked dry.  This is socialism for the rich or a wealth transfer from the middle classes to the super rich. 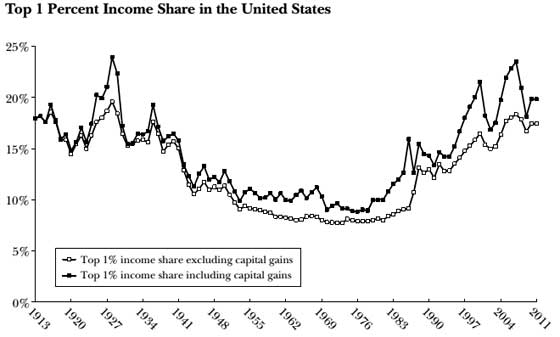 Another graph that many other sites have reproduced but not explained is seen below.  The authors calculated the top marginal tax rates for selected countries based on all local, state and federal taxes.  They then graphed the change from the early 1960's until now.  As we can see the United States is off the charts in giving preferential tax treatment to the top 1% uber-rich.  It should be no surprise then the United States soared in income inequality status as a result of U.S. tax policy. 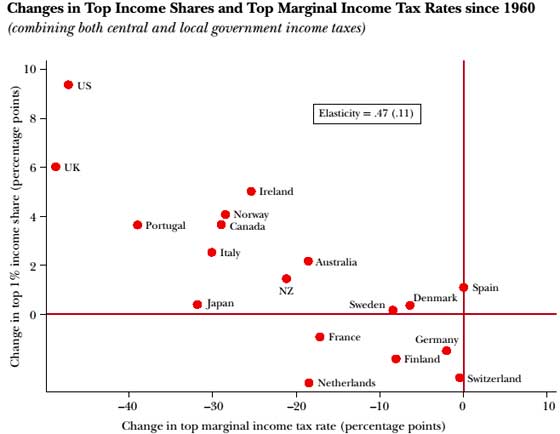 The above graph proves the cause of income inequality in the United States is our representative government.  Is is government which passes tax legislation and over the years they have whittled away on the tax code in order to allow the super rich to line their pockets while the rest of us go under financially.

The last bit of these felllows' research involves the correlation between those who work for a living and the idle rich.  Skipping the math of the paper involving advanced statistics, the Authors found the top 1% uber-rich dominated both the capital earners (the idle rich) and those who work for a living.  In other words, our top 1% are the executive class, CEOs, hedge fund managers and the like who pay themselves some sort of salary, or obtain it, plus make out like bandits on capital gains.  While the paper authors do not conclude the United States has been taken over by corporations and the new Fuedal lords of the kingdom are corporate CEOs, we sure would.  After all, corporate lobbyists are the ones who write and get passed most legislation in Congress these days. 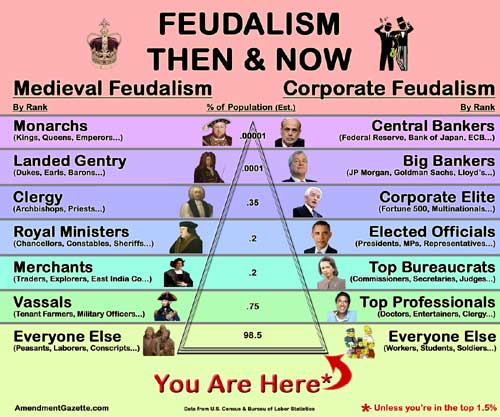 Bottom line, the America of post WWII is long gone,  The land and culture the greatest generation fought for and rebuilt post WWII has disintegrated into the dust heap of history.  America is now the land of the Overlords and serfs, of the super-rich and the proletariat, of the executives and their employees.

The below video shows the scale of income inequality in the United States and is well worth watching if you haven't seen it.  What is most amazing is how the real America, the one this visual represents, just isn't getting how bad the situation really is.  The scale of America economic disparity is unfathomable.  Additionally, the United is subject to a the never ending media barrage hypnotizing the Populist into believing they have disposable income (obtained thanks to Visa and Mastercard).  The reality is we're broke, we're poor, we're third world and we're screwed.  The below video clip might help get that fact past the American denial wall.

Too see more facts on income distribution in the United States consider reading this article, The Rich and the Rest of Us.  This land is their land, no longer our land

Income inequality is another reason we need a flat tax on all increases not just 'income' and short term capital gains. The complexity of the tax system allow those who can afford accountants to take advantage of the loop holes that others can't. We also need to cut bureaucrats from the picture as well. This can be handled by a 10% of net increase charitable mandate tax where you are required to give 10% to the poor either directly or through a non-profit. In this manner we can push wealth back to the bottom and let it filter it's way back up to the top thereby increasing the flow of the economy. In this manner everyone wins including the wealthy as the economy will take off.

This is absurd to claim America should make the tax system even more regressive to "simplify" the tax code. That is what a flat tax is, it would give even more income to the wealthy and would increase income inequality much further.

New study just out showing the top 1% captured 19.3% of all income in 2012 and this is the worst income inequality since 1927. We might overview this latest research but for now, USA Today covered it here.