Citizens are the foundation of functional democracies. The notion of the individual citizen is disparaged by some as an anachronism, a fanciful label from the 18th century that means little today. Democrats and Republicans parse voters by race, region, religion, and, to a lesser extent, income. These groups and subgroups within them are the building blocks of electoral victory according to the common wisdom.

Nevertheless, a vibrant democracy relies on individual citizens who give legitimacy to the nation state every day through their broad ascent to the laws, civil and criminal, and their willing participation in politics and civil obligations, formal and informal.

From 1980 through 2010, off-year elections showed a 37% average turnout. Presidential elections had a slightly higher participation, averaging 53% since 1980. 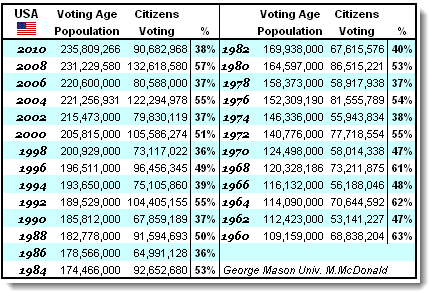 We were told that 2008 would break turnout records. When the dust settled, voter turnout was only two points higher than 2004. Only 38% of eligible voters turned out for the 2010 congressional elections.

The forbidden fact about public rule in the United States is simple and obvious: it is nothing more than perpetual battle between two minority factions that consistently fail citizens. Major changes in power represent voter punishment of the most recent failed rulers, while the largest faction, non-voters, consistently make the most profound statement about governance - it's not worth the trouble of voting.

The Bipartisan Beat Down

The non-voters and many of those who vote reluctantly have good reasons for their clear dissatisfaction with the political system.

Candidates are compromised before every single election by the uniform bias towards those with the greatest ability to make campaign contributions. Money is the first election hurdle. Those elected say that, at most, money buys access, a damning admission that is short of the truth. Money buys votes, legislation, regulation and other favors from the government, all used to preserve and expand the interests of those with the most money to give.

Once elected, the compromised servants are more interested in their true constituents, their big money patrons, than they are in the public.

Those elected give us wars that the majority reject or would have rejected had they received even the barest outline of the rationales for war.

Those elected cut long-standing benefits in order to maintain government subsidies for their contributors. Democrats countered the Republican proposal to destroy Medicare with a kinder, gentler set of austerity proposals. Social Security is also in the bipartisan cross hairs. Republicans long to privatize the system while Democratic leaders endorse the findings of a presidential commission co-chaired by two Wall Street minions who started with two assumptions. Benefits cuts were necessary and the military budget and bailouts were off limits. The cruel dialectic swings between nothing and nothing much at all.

The elected dismiss threats to the environment of hand then offer remedies in the form of energy policies that produce more pollution.

The rights and protections supposedly guaranteed by the Constitution remain in tatters despite electoral changes. Habeas corpus is in limbo. Electronic surveillance becomes an option whenever authorities feel the need. They just file a motion with a secret federal court in Washington, DC and get the warrant (if they have time to bother). Torture continues as a sanctioned government program.

Citizens who just say no to voting or who vote with little expectation of change know these fundamental truths. Our votes do not matter. Our public servants are really privateers working for moneyed interests. Ultimately, there is no moral obligation or intellectual honesty on the part of rulers. They promote an ongoing fraud that has severely damaged the country. These so-called public servants have taken things so far down the road to ruin; there may be no achievable solution.

There is no law to protect us. We are at the whim of the financial elite, the author of our troubles.

There is no national hope, no future, and no redemption as long as the current system remains in place controlled by those with large accumulations of money.

I see what you are saying but I am unwilling to concede that this state of affairs is hopeless or that we are helpless to do anything about it.

Look at how the elderly get just about whatever they want. Isn't that because they vote?

The electorate has been mostly passive for so long, who can say what would happen if the American people started standing up for themselves?

The Tea Party people did and have seemed to make some changes -- but of course we also see how much of what they really want is ignored because it doesn't suit the established politicians.

The 'Tea Party' movement historically has always been protectionist! (Of course, the original Boston Tea Party could be seen more as opposed to tariffs, but it actually was opposed only to tariffs not enacted by the colonies.)

The current so-called 'Tea Party' in Congress has stated their complete support for the fast-track 'free' trade agenda.

The 'Tea Party' has become a tool of the RNC to co-opt popular support for protectionism.

They didn't get those benefits by voting, JoblessInJersey. The benefits were part of the New Deal, a bit of sleight-of-hand to protect corporate rule by means of regulations that could always be, and for the most part already have been, deregulated at any time.

Do you remember the 2000 election? When the Supreme Court stopped the vote count and nullified the election, they said that there was nothing in our Constitution that guarantees the right to have our votes counted. So you may, if you're fortunate, have the precious right to vote, but you don't have the right to have your vote counted. Exactly how precious is an uncounted vote? What changes can be brought about by means of uncounted votes?

Our Constitution was written in such a way as to ensure that those who owned the country would always rule it. So they retained the right to ignore or overrule the popular vote any time they wish.

Delegating your power by voting for candidates you can't hold accountable once they're in office, is like giving your power to attorney to a stranger and then wondering why your money is gone. It is the height of irresponsibility. If you can't hold them accountable, there is no incentive for them to represent you and they're more likely to represent whoever gives them the most money.

Identity politics are ultimately destructive in a time like this, when the nation is so dominated by special interests and in such dire straits.

If us old folks separate our interests from the interests of future generations, we deserve what we get - or, we deserve to lose whatever we lose.

Mark Smith notes SCOTUS Bush v. Gore, "you don't have the right to have your vote counted."

It's like peeling an onion: if you vote, you have no right to have it counted; if your vote is 'counted', you have no right to a real audit; even if your vote is accurately counted, whoever gets on the ballot has been bought by the necessity of campaign money; and, anyway, even if your good guy has won and gets into Congress, he or she will either be bought or will be voted down by the majority who have been bought.

And we haven't even got within the proverbial ten-foot-pole length of that even if everything else goes right, your representative may be assassinated at any time.

Voting looks like the definition of insanity. On the other hand, what does not-voting accomplish?

We have a representative democracy.

We can get rid of people with recalls but it's rarely done.

How can the common people hold represntatives accountable if, as you say, they sell themselves to the highest bidder?

Speaking for myself, I can only say that it's a tough question. However, what comes to mind are two ancient principle of conduct: honor and integrity.

I like Budddy Roemer's approach of refusing all corporate donations and no donations greater than $100 from any one person. But Roemer is studiously ignored both by corporate media and by RNC and company.

After admitting that we are dependent on non-tangibles, we really need to promote close auditing of elections, ballot reform, and, (in some areas more than others), reform of vote-counting technology (wherever there is no auditable paper trail and voting machines are in use).

Audits of random samples to check accuracy of machine counts need to be mandatory in all states. This has to be a state-by-state effort, because of the way the Constitution set up a federal system. Meanwhile, we should avoid the gimmick of "direct presidential elections" -- I don't want my vote in California to be offset by imaginary votes created by some hacker working on the Georgia results.

Finally, there are all the problems brought about by the 'Citizens United' case. In the long run, the only solution will be public funding of campaigns and, probably, some kind of return to the Fairness Doctrine of old for media subject to communications law.

We need to study the way other countries manage their elections -- especially Canada and Australia.

We have to work state by state, because any reforms by way of amendments to the Constitution are out of the question, considering the entrenched power of the duopoly and apparent polarization of voters and of the Congress.

Most Americans don't have the cash to participate in our system of cash bribes to politicians, so they've given up. Only public funding of campaigns will restore our democracy, but that's the last thing in the world our entrenched politicians want to see.

In Iran, all candidates must pass a written test and interview with a special council. Then they're allowed to run.

In the United States, all candidates must pass another test - enough money to enter the campaign.

There's a difference in style but not substance. The ruling class in the United States determines every candidate, except those doomed to lose.

take the city of bell, please, or at least their jailed city hall. when a tiny fraction of the electorate actually gets off their rumps and votes, corruption cannot hide. our votes do count, if for nothing else but tossing out the current crop of thieves and putting into office a new cabal.

but in bell the folks stayed home on election days. gore lost when just a handful more votes would have avoided the supremes' gift of the presidency to their party. and on and on and so it goes, per omnia saecula saeculorum.

If this was the crime and people didn't vote, that's a great illustration of what the cicizen beat down is all about.  They steal so much, so often, corruptoin becomes the norm and people don't get riled up any moro.

I agree entirely - the closer to home the politics are, the greater the chance of getting something done.  But people have to show up.   I guess the people couldn't unring that Bell.

So, Michael Collins, do you ever pull your punches?

Just arguments supported by reasonable evidence. Of course, other people may not find it reasonable. Since I'm not a joiner and don't belong to any political group, omissions and errors are strictly my own. I don't pull any intentionally, although there's always more evidence or a better argument.

Assuring the 300,000,000 million proletarians get their franchise? Any links?