The Social Security administration announced there will be a 1.5% increase in social security benefits next year.  The cost of living adjustment is fairly low, but if chained CPI had passed Congress and was used, the situation for social security increases would be much worse.  The 2014 low increase in benefits should be no surprise for the official inflation figures have been tame.

COLA stands for cost of living adjustment.  The below graph shows the COLA, (cost of living adjustment) per year in green including the 2014 1.5% COLA increase.  CPI-W stands for the consumer price index for wage earners and is used to calculate COLA.  The CPI-W monthly figures are in blue and are not seasonally adjusted numbers. The third quarter CPI-W values, used to calculate COLA, are graphed in red. 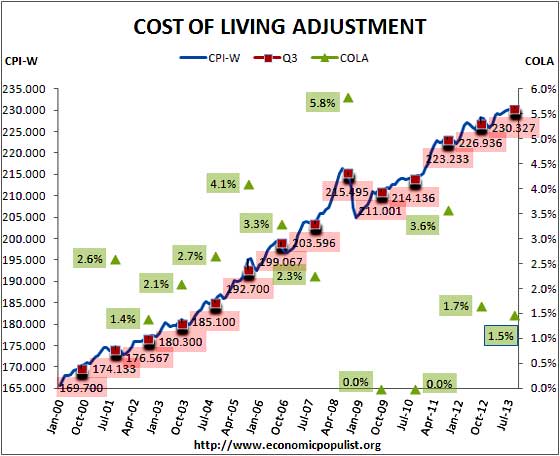 The COLA, or Cost of Living Adjustment is a strange brew indeed in how it is calculated.  The COLA is taken from not seasonally adjusted CPI-W data, using only the previous year's third quarter, i.e. the months of July, August and September, to calculate.  The magic formula for how increases are calculated, upon which so many depend, is:

Notice in the above graph how low a 1.5% increase is in comparison to most years.  Also notice the big drop around 2008 for the consumer price index for wage earners (CPI-W), the blue line.  That's when the great recession deflation hit and resulted in no increase in benefits for two years in a row.  Earlier we warned on some in the press trying to second guess what the cost of living increase would be but, they got lucky on their 1.5% claim.  Now here it is, COLA is finally announced after the delay due to the government shutdown and we have yet another low figure to adjust for the cost of living for over 63 million Americans.  The thing is, if Congress and the Obama administration have their way, cost of living adjustments for social security could be much, much worse

Below is a graph showing what COLA would be if chained CPI was used instead of CPI-W, as it is now.  Chained CPI is the proposed bait and switch inflation measure Congress and Obama want to use to adjust for inflation on a host of government benefits.  The graph is the same as above, COLA is in green the calculation is still the third quarter. 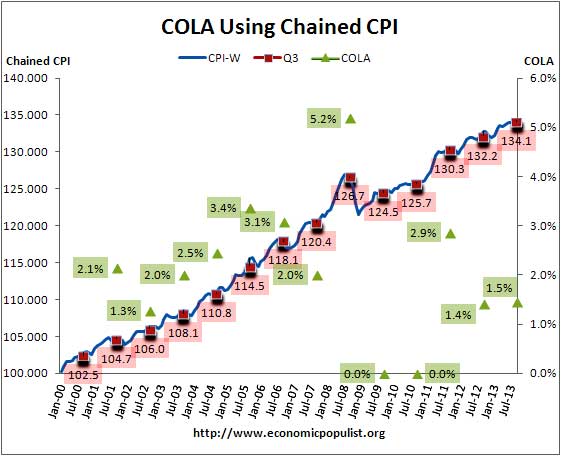 Take the below graph for example.  We start out with someone receiving $1000 dollars in social security benefits every month.  Look at what happens when chained CPI instead of CPI-W is used as an inflation measure to calculate COLA.  Over time chained CPI has the effect of reducing social security benefits for people.  Trust us, the grocery store and gas station could care less what chained CPI says inflation really is, their prices are going to increase no matter what, while people on fixed incomes are left holding the less money for them bag. 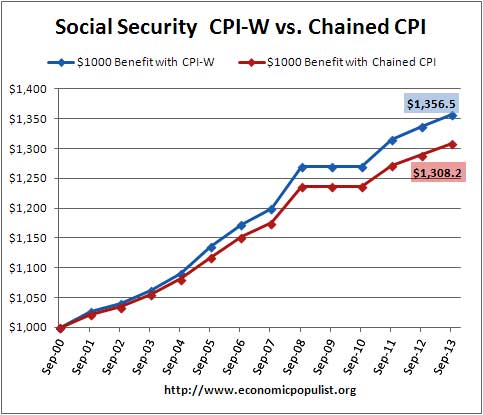 One thousand dollars a month is below average of the monthly social security check most workers have earned.  The greater the monthly base amount the social security benefit is, the less money someone gets to adjust for inflation in coming years using chained CPI.

COLA isn't just used to adjust for inflation on social security benefits, but for all government transfer payments of any kind.  Most people in the United States are affected by the cost of living adjustment as a result.  With all of the whining on social security by the GOP, one might take a look at the maximum benefits one can get from social security.  Frankly it is not enough to live on in most areas of the country as it is.

Now, why does the government just use 1 quarter out of 4 for it's annual cost of living adjustment?   Good question!   Obvious it doesn't make a lot of sense to use only one quarter, Q3, and not inflation measures over the entire year.  If one has a deflationary third quarter in comparison to one year ago that means there will be no cost of living adjustment for the next year.  This is a bad calculation for one could have all of the other quarters with high inflation and thus the entire year shows prices have dramatically increased overall.  The reason the COLA calculation is so funky is Congress demanded COLA be calculated this way.  Politicians have already played slight of hand games with cost of living adjustments to reduce benefits for millions unnecessarily.  Expect to see more chipping away of America's earned benefits with funky math, bad formulas and misleading inflation figures.  In the meantime welcome to the lowest cost of living increase since 2010!

there will also be a corresponding 1.7% increase in the income tax brackets, which means that the highest marginal tax rate of 39.6% wont kick in until taxable income of an individual exceeds $406,750 in 2014...and the dead will get an even greater increase than the elderly and the rich, as the individual estate-tax exclusion, which is now also pegged to inflation, will be $5.34 million in 2014, up from $5.25 million currently...

under Obama there would be just tax cuts for the rich. One more in the notch of Bushism.

END_OF_DOCUMENT_TOKEN_TO_BE_REPLACED

House discusses 401k/IRA confiscation - 255571 reads
The Economic Populist Site Rank, Statistics and All of That Jazz - 144924 reads
The Federal Reserve Destroyed Our Site - 124091 reads
The QE2 Binge - Inflation on the Horizon - 60808 reads
Obama Signs Deal to Allow Mexican Truckers Onto U.S. Highways - 58586 reads
Wisconsin Does the Nasty Against Labor - 125390 reads
The Obama Administration is Training Offshore Foreign Workers to Take your Job - 67171 reads
Saturday Reads Around the Internets - Government Complicit in Libor Mess - 9105 reads
The Approaching Muni Bond Implosion - 29822 reads
Libya, Gas Prices, and the Big Payday at Your Expense - 48103 reads
Will the NY Attorney General Bring Doomsday Charges Against Wall Street? If So, How Long Will He Survive? - 1182917 reads
New York Post Claims Census Falsifies Unemployment Figures - 897536 reads
Safeway Skewered for Throwing 6,000 Workers Under the Bus in Video Parody - 396618 reads
How Many Jobs Are Needed to Keep Up with Population Growth? - 284567 reads
VAT or Value Added Tax is Getting a Look in D.C. - 279102 reads
U3 and U6 Unemployment during the Great Depression - 272194 reads
Tax Cuts for the Rich Do Not Generate Jobs - 257985 reads
House discusses 401k/IRA confiscation - 255240 reads
Delusions of Normalcy 2011 - Dismal Scientists Cheer Up - 245308 reads
The war on the middle class - 243710 reads