The main driver underpinning Moody's decision to downgrade the UK's government bond rating to Aa1 is the increasing clarity that, despite considerable structural economic strengths, the UK's economic growth will remain sluggish over the next few years due to the anticipated slow growth of the global economy and the drag on the UK economy from the ongoing domestic public- and private-sector deleveraging process. 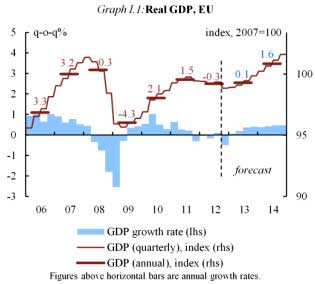 Below is the overall unemployment project graph and that big fat red 2013 forecast line is higher than the unemployment rate in 2012.  Six years after the financial crisis the jobs crisis will worsen. 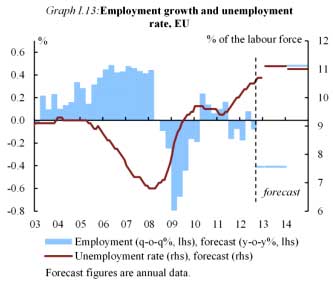 This is just going on and on for Europe.  In 2012 real GDP contracted -0.3% for the EU and -0.6% for Eurozone countries as a whole.  Austerity is the reason it's so bad.  From the European Commission report:

The weakening of global growth and the aggravation of the sovereign-debt crisis in the first half of last year, reflecting high deleveraging needs in the public and private sector, have shackled economic activity throughout 2012 and pushed the euro area back into a recession.

Another reason for the terrible economic projections is a lack of private investment.  Seems the never ending sovereign debt crisis took their toil as public funds went to prop up the banks and private investors pulled back and out of Europe.  Some countries will remain decimated, such as Spain and Greece.  Spain's unemployment rate is project to go even higher, around 27% and Greece is no better off with a forecast 25.7% unemployment rate for 2013.  Below is a graph of Spain's official unemployment rate and Greece looks the same, a rocket to unemployment land.  Unemployment rates this high are comparable to the darkest days of the 1930's Great Depression. 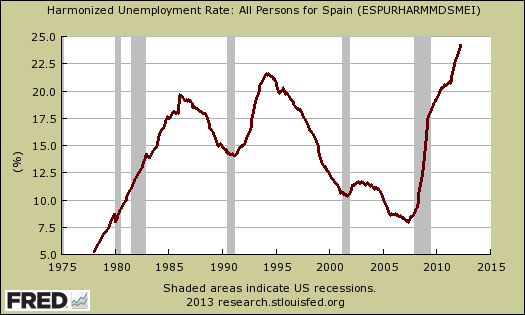 The report mentions additional risks that could further weak Europe's economy.  A large one is America's crazy Congress and political gridlock.   Not only will sequestration and hatchet job budget cuts hurt the United States economy, the actions of the U.S. Congress are also threatening Europe.

Significant downside risks also stem from the external environment. Political gridlock in the US is still threatening to result in much sharper fiscal retrenchment in the US by the beginning of March.

The report is just bleak and if anyone recalls, three years ago, 2013 was the year when all would be well.  The report also goes to show what propping up Bankster banks at the expense of the people does.   It is like cutting off the legs of the economy and then expecting that nation to pull itself back up by it's own bootstraps when their legs are now missing.

Read The Guardian, The Telegraph, and other papers of all leanings - Brits are tired of the EU experiment, massive unemployment, and governments that serve Wall Street (and The City over there). Labor and Conservatives both doing nothing to protect their own citizens against labor arbitrage and unemployment that causes deficits that Wall Street and The City then seek to remedy through austerity (huh?) on the 99%. The EU experiment isn't working out and resentment can't be contained. It's a dismal state of affairs that is being repeated across high wage nations, and the newspaper articles could literally be the same across the globe.

But check it out - Tata Consulting claims a "skills gap" and more immigration and visas needed in the UK! Sound familiar? Skills gap everywhere, everywhere but the points of origin from where immigrants come. And where do these pearls of wisdom come from? Why Davos of course - awesome! I'd be in Davos, but the dbag factor over there is too great for the common man to tolerate. Plus armed goons simply won't let the great unwashed masses get to close to our "betters" as they plot our demise. No average citizens of the UK or USA allowed to contradict outsourcing companies or heads of state as they screw us.
http://www.telegraph.co.uk/finance/financetopics/davos/9828725/Britain-m...

Right and our Government is busy selling out U.S. STEM professionals as much as they possibly can in "Comprehensive immigration reform".

These lobbyists and offshore outsourcing companies out to steal jobs will say there is a "skills" shortage when people have to go abroad to get a job (with PhDs in STEM) and the unemployment rate is 25%. (Spain).

Clip - If anything, we have too many high-tech workers: more than nine million people have degrees in a science, technology, engineering or math field, but only about three million have a job in one. That’s largely because pay levels don’t reward their skills.

Salaries in computer- and math-related fields for workers with a college degree rose only 4.5 percent between 2000 and 2011. If these skills are so valuable and in such short supply, salaries should at least keep pace with the tech companies’ profits, which have exploded.

Surprising the Brits have been so passive. They could cause the elites some problems.

Just like the U.S., they have been taken on a ride so many times, they are exhausted, like us. Thatcherism comes to mind.